Back From the Brink

For their IQP, Matt Dunster, Tommy Nuthmann, Drew Egger, and Jess Desmond found themselves about as far from WPI and Worcester as you can get: New Zealand. 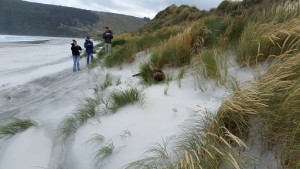 The students spent seven weeks earlier this year on the island nation half a world away as part of an effort to save the endangered New Zealand sea lion.

Topics
Interactive Qualifying Project (IQP)
|
Students
DEPARTMENT(S)
Global Projects Program
|
Project-based Learning
The whole idea of the IQP is looking at a problem at the intersection of society and technology.

During their stay, the students caught the attention of local media, which published and aired stories on their work.

“I think they had a terrific experience,” said Elmes, who oversaw the project with Bob Hersh, an adjunct teaching professor in Interdisciplinary and Global Studies.

New Zealand’s sea lions are the most threatened of the species, according to the Department of Conservation, which says they were hunted almost to extinction before being protected by law in 1880. The population stands at about 10,000 and they all could be gone by 2035, according to the department. Current threats include entanglement in fishing equipment at sea, and confrontations with humans and dogs on land. Conservation officials consider recolonizing the mainland as crucial to their survival, but that means residents and their dogs must share beaches and, in some cases, closing beaches altogether. 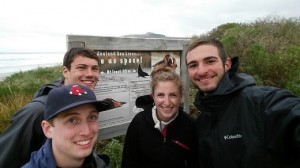 The Department of Conservation is developing a plan to protect the sea lions, and one of the first steps in that process was to survey people’s knowledge and attitudes about the animals, which can weigh up to 800 pounds and are not particularly shy around people and dogs.

After meeting with conservation officials, the WPI team did a survey to assess public knowledge and attitudes and suggested an educational approach to increase awareness.

The students found that while most residents didn’t know much about sea lions, their perception of them was generally positive, with more than 90 percent of those questioned in favor or sharing or closing beaches.

In their report, Dunster, Desmond, Egger, and Nuthmann recommended getting more educational materials into schools—including interactive programs in primary schools, hosting educational programs at public fairs, posting signs at beaches urging people to control their dogs, and spreading the word about sea lions and their plight on social media.

“The thing I found most encouraging was that the New Zealanders answering the survey were very open to not only closing beaches for sea lions, but also sharing beaches,” Elmes said.

The students went to New Zealand well prepared, interviewing experts at the Mystic Aquarium in Connecticut as part of their research.

To Elmes, their project is just what an IQP should be. “The whole idea of the IQP is looking at a problem at the intersection of society and technology,” he said. “You can’t just hole up in your area of interest and technology. You need to think more broadly. This is the project that’s intended to broaden them.”

To Dunster, the project and the trip added up to a life-changing experience. “I found that there is so much more to the world than what we learn in school and see on TV,” he said. “When I returned to WPI, I developed a whole different attitude and mindset about how I want to live my life and think as an individual. I have grown a substantial amount.”