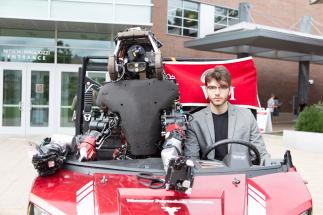 With multiple inventions, top awards from national science and innovation fairs, a trip to the White House, and a placement working alongside Elon Musk under his belt, it’s no wonder sophomore Benjamin Hylak ’19 was named one of 20 Under 20 STEAM Pioneers by the Huffington Post and Ford earlier this month.

The online newspaper teamed up with the automaker to profile “20 of the most impressive under-20-year-olds to show you the next generation of the best and brightest innovators.”

According to the article, 20 Under 20: Meet the Next Generation of STEAM Pioneers, “While these passionate individuals have a natural interest in the science, technology, engineering, arts, and mathematics (STEAM) fields, it’s their hard work and dedication that has pushed them to succeed in making a name for themselves―all before reaching the age of 20.”

And to think, for Hylak, it all began with Legos. 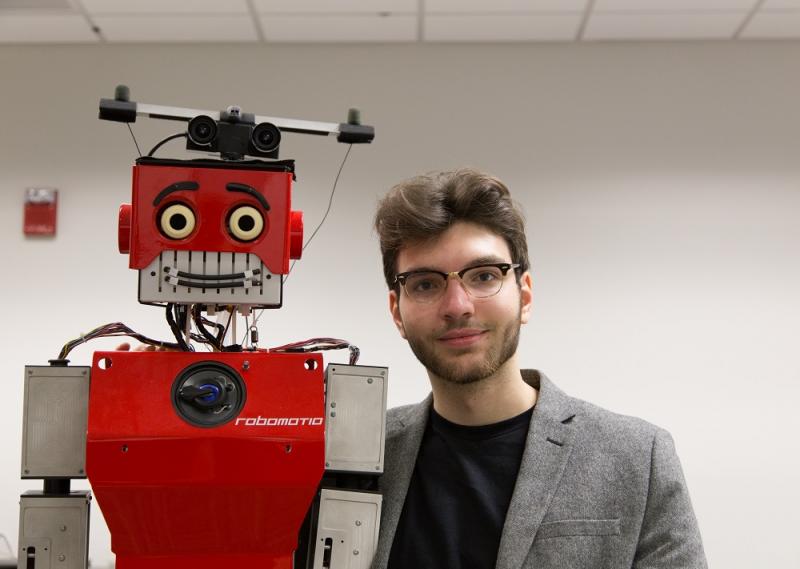 “The best thing my mom ever did for me and my brother was buy us thousands of Legos when we were kids. I think she single-handedly kept the Lego store afloat,” says Hylak, a robotics and computer science major from West Grove, Pennsylvania.

Though his parents aren’t engineers (his dad is a songwriter, his mom a translator and interpreter), they encouraged their sons to use their imaginations to build elaborate structures and devices from the classic blocks. Hylak ran with it, branching out into robotics, using spare parts as he grew older.

In eighth grade, wishing to spend more time with his grandmother—but lacking transportation—he developed a telepresence robot for $500 using off-the-shelf components like a Roomba vacuum cleaner and a trash can. He called it MAYA (Me and You Anywhere) and tested it with more than 100 elderly residents, who found the robot provided an experience akin to a live visit. On a survey testing user-friendliness, with "1" being a standard phone call and "10" corresponding to an in-home visit, MAYA scored 8.2, Hylak says.

MAYA earned the then 14-year-old a silver medal at the 2011 Broadcom MASTERS National Science Fair for middle schoolers, kudos at that year’s New York Maker Faire, and a trip to present MAYA to President Barack Obama at the second annual White House Science Fair.

“I can’t even explain how amazing an experience that was. People there were absolutely brilliant. And I got to meet (science educator and children’s science TV show host) Bill Nye, which was even cooler,” says Hylak.

The project was like “two science projects in one,” he says. The first was building a working robot and the second, which he says is more important, was testing it with people who might use it.

“This is something that is really emphasized at WPI. It’s not just that I built something that worked, but that it worked for the senior citizens I made it for. If they didn’t like it, it didn’t really work,” he says.

Building on his experience with MAYA and his desire to meet the needs of an aging population, Hylak next created ALAIR (Assisted Living Autonomous Internet Robot), a robotic in-home nurse. ALAIR is able to take vitals, Skype with doctors, detect falls, and even dispense medication. Again, he tried it out on seniors, who overwhelmingly approved of the robot, saying it was more convenient than waiting for a human nurse to arrive.

Although he isn’t sure how the Huffington Post came to know of his accomplishments, Hylak’s impressive resume offers clues. He has two other inventions to his name, plus he was a Google Science Fair International Semi Finalist (1 of 90), an Intel Tomorrow Project Anthology author, a Verizon Powerful Answers semifinalist, has won five Editor’s Choice Awards at Maker Faire New York, and has spoken at Maker Faire twice, among many other honors and achievements.

Hylak became aware of WPI through the university’s collaboration with FIRST (For Inspiration and Recognition of Science and Technology). After applying to colleges, he looked into WPI’s program more deeply and chose to come here because of the emphasis on project-based learning.

“I’ve learned everything I know about engineering from working on projects,” says Hylak, referring to his Lego-playing days through his high school years. “I applied because of FIRST, but when I looked closer, I saw the emphasis on applying knowledge learned to the real world and then looking at the results of what you did. I knew that if I continued learning like that, I wouldn’t just end up with knowledge that can’t be applied.”

Case in point, the Great Problems Seminar course Hylak took freshman year. During the class, Ben was introduced to Poverty Stoplight, a qualitative definition of poverty created by Fundacion Paraguaya. The Poverty Stoplight definition uses qualitative indicators such as access to access to water, nutritious food, technology, and mental health care. This methodology has been successful in other parts of the world, says Hylak, but there was little research to determine if it could work in the United States. After working on a team of peers to interview lawyers, doctors, social workers, the city manager and more, they decided it could work and developed a plan.

But the plan is only meaningful if it is implemented, says Hylak, and that’s what inspired him, Nicole Franco (’19), Paula Sardi (’19), and Nathaniel Mione (’19) to start a Poverty Stoplight program in Worcester. Utilizing the bright minds of WPI, the club will create a comprehensive definition of poverty in Worcester and then create individualized plans to help families eliminate their poverty.

Hylak has always thought he’d prefer to start his own company rather than work in the industry after graduation, but his time working as an Avionics Engineer with Space Exploration Technologies Corporation (SpaceX) this past spring has made him reconsider.

“It was an amazing experience. I was literally working with and around Elon Musk all the time. I’ve always felt like I’d prefer to start my own company, but now I see the need to explore more options in the industry, because I had such a great experience.”

Though his specific postgraduate plans are unresolved for now, Hylak says he’s clear on one point: “In general, I really want to redefine human-robot interaction and create robots that are able to help us in our day-to-day life.”