A team of materials science researchers at Worcester Polytechnic Institute (WPI) is developing what could be the first commercially viable process for recovering valuable metals from red mud, a hazardous byproduct of aluminum production that is currently stored in holding ponds around the world. 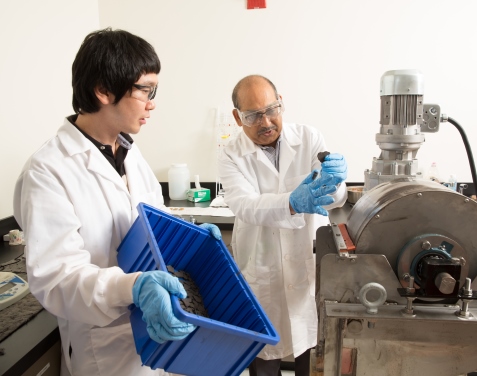 “We’re trying to help the environment by getting rid of these ponds, which can leak and destroy surrounding ecosystems,” said team leader Brajendra Mishra, director of WPI’s Center for Resource Recovery and Recycling (CR3). “If our process is successful, we can produce a valuable product while also reclaiming that land.”

The process the WPI team has developed and extensively tested in the lab can extract a magnetic reduced iron oxide from red mud. The material can then be sold to companies that use it to make pigments for construction materials and produce a variety of agricultural applications for soil and crop growth. Depending upon its purity, the iron oxide can sell for up to several thousand dollars per ton. Since iron oxides can make up as much as 60 percent of red mud, a viable recovery method could be lucrative, Mishra says.

Mishra and PhD researcher Sumedh Gostu are currently working closely with a Worcester-area company in an attempt to scale up a process. In addition, Mishra said several CR3 member companies are providing about $100,000 annually in research funding to help support the research.

Red mud is the caustic material left over after aluminum is extracted from bauxite. Mishra said about four billion tons of the waste material is stored globally in ponds where aluminum production plants are based, primarily in Canada, Australia, Greece, and southeastern United States. About 120 million tons of new red mud waste is produced yearly (for every ton of aluminum produced, more than two tons of red mud is generated). In addition to constituting an economic loss, the waste poses significant environmental risks that include harmful chemicals leaching into groundwater.

Mishra said his research team currently receives the red mud from three sources: a Canadian mining company, a firm in Greece, and an alumina plant in Gramercy, La. The companies ship the red mud waste to WPI in 15-gallon drums.

Mishra noted that a number of companies are interested in developing solutions to get rid of the red mud, while also producing saleable byproducts. “This (red mud waste) is going to become a problem of such a proportion that some aluminum producers may have to shut down, if a solution is not found,” said Mishra.

After WPI receives the red mud, a two-step recovery process then takes place at WPI’s Washburn laboratories. The mud, which looks like clay, first undergoes a gas-based carbothermic reduction process before being placed on an apparatus for separation. The team then uses a magnetic separator to remove the iron oxide from non-magnetic materials such as alumina, calcium silicate, and other elements. 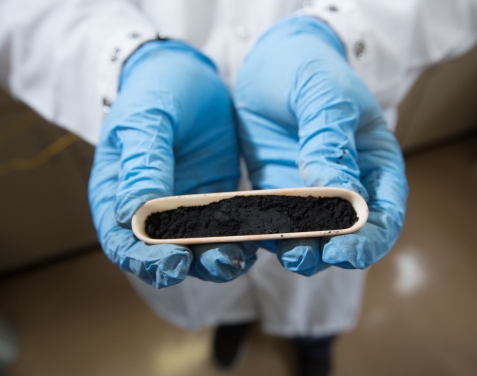 “We’re the only ones with a process for producing the reduced iron oxide and converting it to a saleable product,” said Mishra, adding that he expects patents to be placed on the process.

Mishra, who joined WPI in 2015, began his red mud recovery research at the Colorado School of Mines in 1995, where he served as a professor of Corrosion and Physico-chemical Processing in Metallurgical & Materials Engineering.

Mishra predicts that a commercial process to recover products from red mud will be developed within the next five years in the United States.

“We can’t afford to keep collecting red mud in ponds,” he said. “The value in recovering materials from red mud would have a tremendous impact for the aluminum industry and for the economy.”