As the 1950s vintage cars course through city streets seemingly frozen in time, a vibrant biopharmaceutical sector flourishes in Cuba, supplying most of the country’s essential medicines and exporting life-saving vaccines to developing countries.

“It was not what I expected to find,” says Kamal Rashid, PhD, director of WPI’s Biomanufacturing Education and Training Center, who was part of a Massachusetts Biotechnology Council (MassBio) delegation that traveled to Cuba in February. 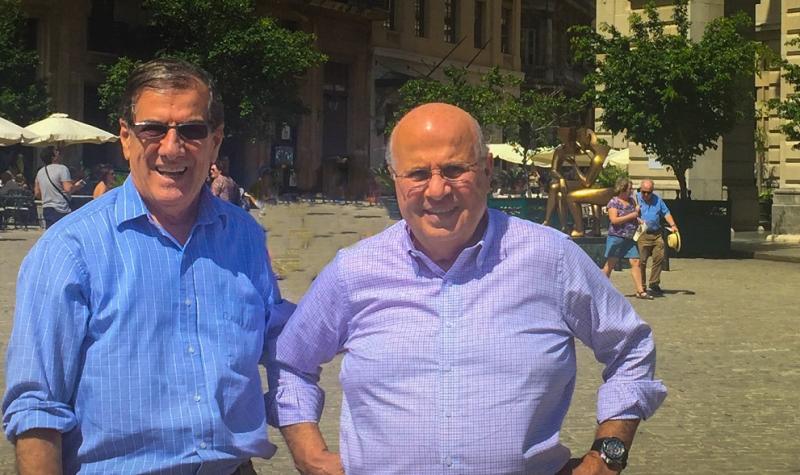 Kamal Rashid with Dr. Abraham Haddad, chairman of
the board at Massachusetts Biomedical Initiatives (MBI).

“With the new openness between the United States and Cuba, we want to seize the opportunity to explore mutually beneficial collaborations in both biologics research and biomanufacturing,” Rashid says. “Massachusetts is a world leader in biopharmaceutical development and manufacturing, so it makes sense for both sides to begin building relationships. And having the two Congressmen with us was very important in terms of access and respect from the Cuban leadership. Their presence elevated our mission.”

In addition to his work at WPI, Utah State, and Penn State, Rashid has led biotechnology research, education, and biomanufacturing workforce training programs in 15 countries and territories, including multiple projects in the Dominican Republic and Puerto Rico. Based on his experience, Rashid says Cuba is “the clear biotech leader in Latin America.”

“I was quite impressed with the scale of their capabilities and their research in several programs,” he says. “The Cuban government made an early commitment to investing in biotechnology in the 1980s and they have followed through, in spite of a very difficult economy and the impact of the U.S. trade embargo.”

BioCubaFarma is the government run umbrella organization for the industry. It has 31 affiliated entities and 62 production centers. It has a staff of over 22,000 people and manufactures 525 of the 849 drugs in Cuba’s catalog of essential medicines.

"With the new openness between the United States and Cuba, we want to seize the opportunity to explore mutually beneficial collaborations in both biologics research and biomanufacturing. Massachusetts is a world leader in biopharmaceutical development and manufacturing, so it makes sense for both sides to begin building relationships." -Kamal Rashid

Rashid and the delegation met with BioCubaFarma leaders and visited research scientists at Cuba’s Center for Genetic Engineering and Biotechnology. That center has developed 21 products, including cancer immunotherapies, a hepatitis B vaccine, and therapies for macular degeneration.

Rashid and colleagues also met with scientists and leaders at Cuba’s Institute of Tropical Medicine “Pedro Kouri” (named for its founder), which has operated continuously since 1937. The institute houses a World Health Organization (WHO) and Pan-American Health Organization (PAHO) collaborative center for the study of viral diseases, with a current focus on dengue fever, Zika, and measles.

Rashid says he saw strengths in vaccines, cancer therapies. and medicinal plants that U.S.-based companies could help advance to larger scale clinical trials. What the Cubans need are partnerships and access to U.S./Western research funding, technology, and investments in production capabilities, he notes.

“It was a first step and I believe we started some important conversations,” Rashid says. “The next step is for a group of Cuban scientists and biotech leaders to travel here to Massachusetts. I hope that will happen within the year.”