What began as a collaboration more than a term in the making with University Marketing and Communications manifested March 10–12 as a booth full of color, freebies, and most important, video games. “I'm just really excited to be here,” said Erik Cerini, gesturing toward the vast PAX expanse before greeting a booth visitor with a warm, “Hi! Are you interested in WPI?” 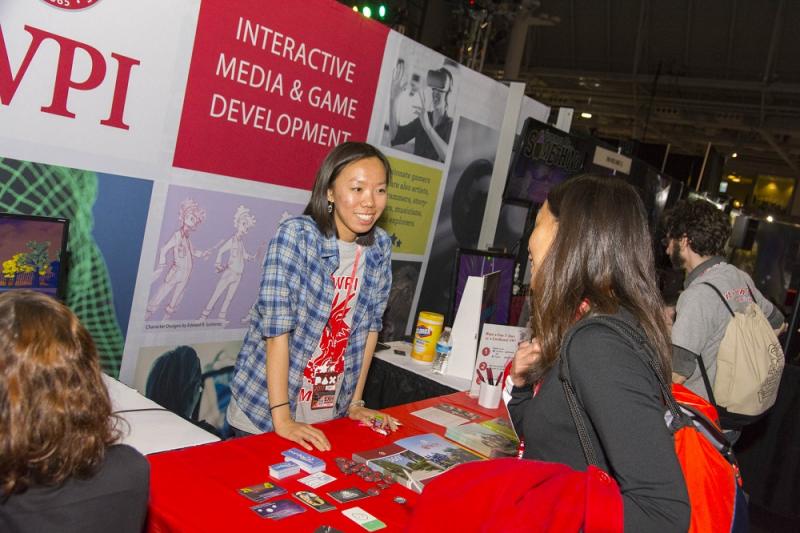 ​Cerini, Kelly Zhang, and Matt Szpunar were the student representatives for this year’s booth, working with Marketing to ensure WPI would have a stronger, more impactful, and professional presence than ever before. Over the course of the weekend, the three, along with a handful of IMGD professors and fellow students, rotated in and out of the booth, taking turns explaining the games on display, directing visitors to appropriate resources, and making them excited about everything going on at WPI, from pre-college programs to the IMGD major itself.

In addition to a strong presence at the convention, IMGD students took to Twitter, posting trivia questions every few hours about their games on display and about WPI in general. If attendees knew an answer to a question, they could tell one of the students at the booth and win a prize. A photographer and writer were also covering the convention and posting snapshots and updates to WPI’s Twitter and Facebook pages, helping those who weren’t attending to get a bit of the PAX experience themselves. 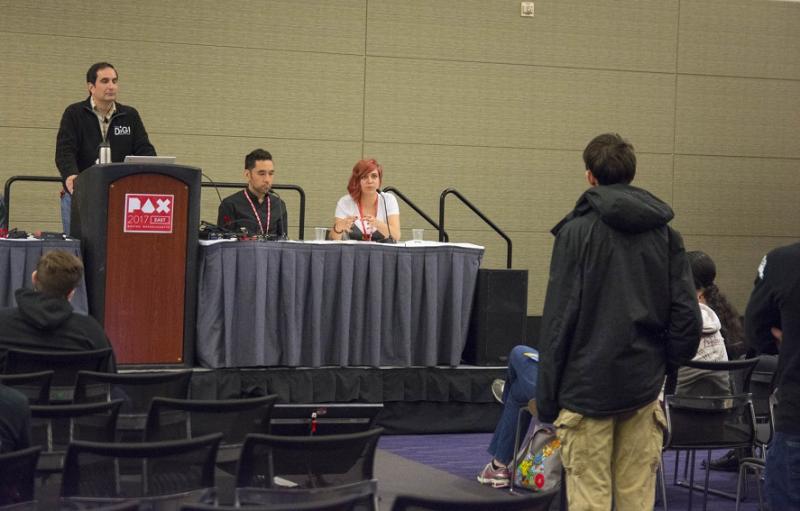 Ichiro Lambe (center) and Francesca Carletto-Leon
participate in a panel moderated by Monty Sharma of
MassDiGI.

The IMGD booth offered four student-created games ranging from virtual reality to 3-D puzzles, ensuring there would be something for everyone to enjoy. Games were chosen based on playability and whether players could jump into the game, get a taste of it, and complete it quickly. Booth visitors could immerse themselves in a horror-themed virtual reality game called ARIN, a single-player twitch platform game called bounce.wav, a 3-D puzzle game called Velum, and a two-player competitive game called Summon Me Something.

“[Summon Me Something] was created by three students in 48 hours for Global Game Jam, and was actually shown first at TouchTomorrow,” Cerini explains, “so we knew it would work well here at PAX."

WPI’s presence wasn’t just felt at booth 15127; some alumni sat on several panels and showcased games in booths of their own around the show floor. Francesca Carletto-Leon, co-founder of Contigo Games studio, along with alums Chris Chung and Ichiro Lambe spent Friday morning on a panel run by Mass DiGI advising aspiring game developers, offering advice on how to improve their game pitches and what they can expect to encounter during the development process. Chung discussed the trials and tribulations of working as a QA tester in games later that afternoon, and on Sunday Carletto-Leon and alum Ken Gagne participated in a panel called “Life After Graduation,” where they reflected on what they learned at WPI and how their education prepared them for, well, life after graduation.

Carletto-Leon explained, “I decided to go to WPI because they separate the game development major into two tracks, a technical one, and one with more of an art focus. But either way, you take classes in both and become a well-rounded developer [by the time you graduate]. I’m working on my own game and it’s really handy to know all of these different aspects of development.”

In addition to their passion and organization—something WPI students and alumni embodied over the course of the weekend—was camaraderie. There were times when the booth was especially crowded, and WPI students who weren’t working the booth but had stopped to say hello quickly donned WPI IMGD shirts and assisted their peers in handling the traffic and explaining the basics of the program to visitors.

Ralph Sutter, IMGD professor and co-advisor of the project, emphasizes the importance of having a booth alongside major companies like Blizzard Entertainment, Nintendo, the Indie MEGABOOTH, and Adult Swim Games. “[PAX] is a great place to be, because everyone is showing off finished products," he said, "and our booth and games show that WPI gives students all the tools and experience they need to make that happen, too.”