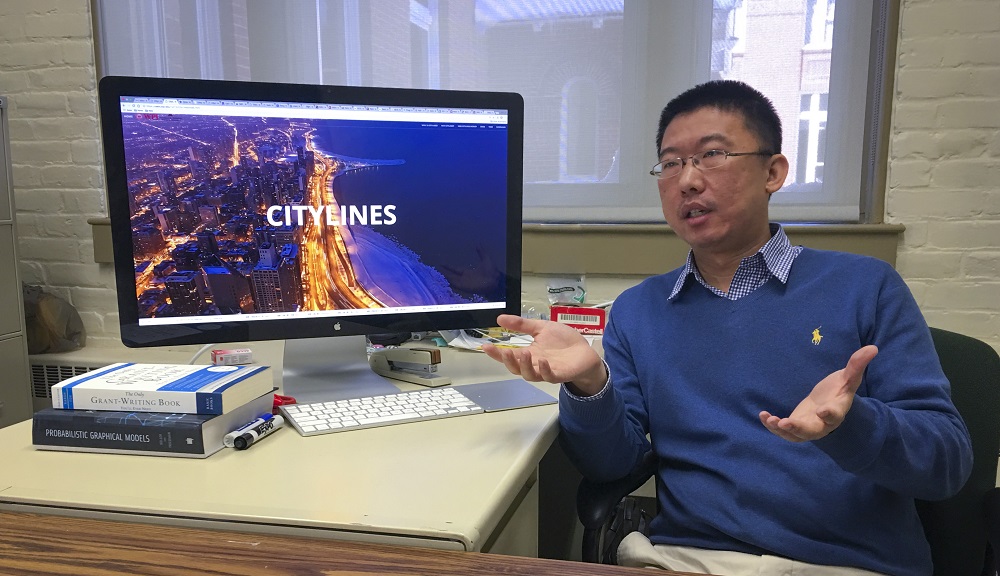 Commuters frustrated with costly private taxi or car-sharing services and inconvenient public buses or subways may one day have another alternative: an urban transit system that uses a “hub-and-spoke” model with shared shuttles.

The concept is the brainchild of Yanhua Li, assistant professor of computer science and data science at Worcester Polytechnic Institute (WPI). Li recently received a two-year, $174,596 grant from the National Science Foundation to study the transportation idea.

Li is modeling the system after the airline industry’s hub-and-spoke system, in which the hub is a central airport through which flights are routed, and the spokes are routes that radiate out from the hub.

But unlike airlines, which have fairly stable travel schedules, Li said urban transit systems can be unpredictable and requires significantly more data to determine the best travel scenarios. “We need to understand how to design a system that’s more dynamic for urban areas,” he said.

In response, Li and his research team—three PhD students working in his Urban Computing Lab at WPI—are developing data science techniques to design a framework for a streamlined system. Their analysis found that routing urban trips along spokes that connect to a few hubs or along direct paths would be more efficient, with travel times as short as private transit such as taxis and fares as low as public transit such as buses and subways.

Following successful computer simulations in the lab, the team is now employing transportation data from the Minneapolis-St. Paul metro areas, as well as trip demand data from 20,000 taxis, 8,000 buses, and five subway lines in Shenzhen, China, to evaluate the performance of the proposed model, which they call CityLines.

Using real trip demands as input, simulations will be conducted to evaluate and compare the proposed CityLines service to public and private transits, while measuring the quality of the user experience in areas such as trip time, overall service, and cost.

The team also plans to work with the Minnesota Department of Transportation (MNDOT) to develop a CityLines model for the Minneapolis-St. Paul Twin Cities metro area. Li, who received his PhD in computer science from the

University of Minnesota-Twin Cities in 2013, is working closely with members of that university’s Center for Transportation Studies.

“We will first use real data we collect from the Twin Cities and China to evaluate the framework using simulation tools,” said Li. “We are hoping to work with city leaders in those places to deploy some small-scale tests with buses. Eventually, we’d like to see if such a service could be used in places like Worcester and Boston.”

Li said his research is unique because the work is being conducted by computer and data scientists and not civil engineers, who more commonly work in this area.

“We think using data science and computer science will help push this concept further, and we’re also eager to work with transportation officials and civil engineers to propel this idea,” he said.