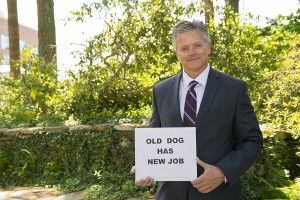 For years, he hustled juggling a full schedule of classes with a full-time, second-shift custodial job. And most of the time in between (what little of it he had) was spent on his coursework and his Major Qualifying Project; he even picked up the occasional plastering gig, too.

But Michael Vaudreuil—maybe the name sounds familiar?—has finally gotten his payoff. The custodian-turned-engineer, whose story went viral after WPI’s 148th commencement ceremony on May 14, has accepted a position at Pratt & Whitney in Connecticut. As of July 11, he will be an engineer with the aerospace manufacturer’s Production Integrated Product Team (PIPT).

“I’m going to quote one of my favorite movies—they made me an offer I couldn’t refuse,” the 54-year-old says with a laugh (and shame on you if you don’t get the reference). “I’m looking forward to the satisfaction and fulfillment that will come with the job.”

It’s a fitting start to a new chapter of his life.

If you’re interested in working overseas, these websites will provide opportunities to help you get a new stamp in your passport.

GoinGlobal is a perfect job-searching tool for both international and domestic students.

Vaudreuil’s story—enduring setback after professional setback, losing his home, his life savings, and for a while, his hope—has resonated with millions. From NBC Nightly News, to the UK’s Independent, dozens of media outlets around the world picked up the story about the middle-aged custodian who earned his mechanical engineering degree from the university he cleaned at night. One video of him graduating garnered more than 11 million views.

“I was certainly welcoming of it, because I thought it would help networking-wise,” he says of the media attention. “To the degree that it took off was a bit surprising. It was almost an out-of-body experience. You see this happen, things go viral—now it’s happening to me.” 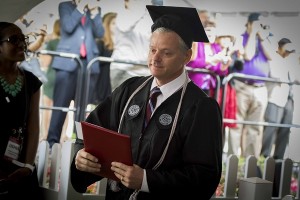 Following his segment on NBC Nightly News, four people from Pratt & Whitney reached out to him on the same day, independently of each other. It was flattering, he recalled, because he could tell they saw something in him. Tom Prete, vice president, Engineering, at Pratt & Whitney, said the firm is proud to hire the recent WPI grad.

“Pratt & Whitney engineers design and develop products that change the world. As we continue to grow our global workforce, we are proud to add Michael Vaudreuil to our talented team,” says Prete.  “Our employees are critical to our success and the reason we are in the midst of one of the most exciting chapters in our company’s history.”

“I feel like I kind of won the lottery,” Vaudreuil says.

Still, he hasn’t let any of that deter him from his goal. “I really haven’t lost sight of the eye-on-the-prize type of thinking,” he says. “Getting that job is always what it’s been about. That’s the moment I fought for, for so hard, all of those years.”

Right now, he’s still working as a custodian at WPI—which he expects to continue through June—but his Auburn home is up for sale and he’ll soon be relocating to Connecticut. Both he and his wife, Joyce, (whom he credits with supporting him wholeheartedly throughout the trying and emotional process of earning his degree) are looking forward to the move. 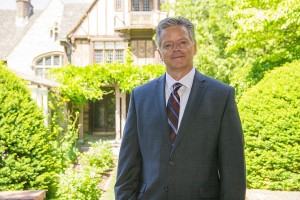 In his new job, Vaudreuil will work in a division that deals with jet engines. Several years ago he earned an associate’s degree in aeronautical technology from Wentworth Institute of Technology.

In his new position, he’ll be working in the Hot Section Engineering division at Pratt & Whitney, which deals with jet engine combustion chambers, and turbine and exhaust systems. For him, it was a perfect fit, because years ago, he earned an associate’s degree in aeronautical technology from Wentworth Institute of Technology.

Ultimately—beyond moving on with his new life and his new job—Vaudreuil says he hopes the media attention helps change the perception of older graduates and job candidates.

“This last year was filled with a lot of anticipation and excitement, but also trepidation,” he recalls. “The reality was sinking in that I was going to be a 54-year-old graduate.”

Sometimes, he notes, the life experiences of older job candidates can get overlooked or taken for granted, or there’s a stereotype that their better days are behind them and they’re just riding it out to retirement.

But as is clear with Vaudreuil, never assume, never underestimate—and never give up. “Nobody’s going to question my work ethic, my energy level or my desire,” he says.