In a day full of bridge metaphors, almost all of the speakers at the ceremony noted that it was fitting that one be dedicated to the late Myra Hiatt Kraft. Bridges provide transitions to get from one place to another, they connect people of different backgrounds and ethnicities, and they encourage accessibility to all. All were hallmarks of the life of Mrs. Kraft.

And during yesterday’s dedication of the new Elm Park footbridge in his late wife’s name, New England Patriots owner Robert Kraft thanked WPI and Worcester Technical High School for their work designing and building the new span, surprising the gathering with the announcement that he would make “a little investment in each school.”  WPI will be awarded $100,000 to be used to fund a scholarship program named after Mrs. Kraft. Worcester Technical High School will be given another $100,000 for its carpentry, metal, and wood fabrication design programs.

President Leshin said that the WPI scholarship is a gift that shows “incredible generosity.” She said she is “thrilled to collaborate with the Kraft family to continue to make WPI accessible to many students.”

WPI’s role in the bridge project began in 2013, when an inspection of Elm Park’s footbridge found that it was no longer structurally sound, nor safe for the public to use. WPI civil engineering students became involved, with an MQP to design a replacement bridge, and students from Worcester Technical High School doing the physical construction.

The Worcester Historical Commission asked that the new bridge be designed in a similar visual style as the old one, keeping its historical integrity intact. The new bridge also complies with Americans with Disabilities Act (ADA) guidelines, and provides enough vertical room for ice skaters to pass underneath.

Worcester Mayor Joe Petty acted as master of ceremonies, opening yesterday’s program in Elm Park by thanking all for their participation in the project. He listed some of the improvements in the park that have taken place in the last four years.

The speakers all mixed their personal stories with the iconic. City Manager Ed Augustus noted that while his Division of Parks is responsible for the footbridge maintenance, the previous bridge was also the background for his own parents’ wedding. The engineer who approved the design of the new bridge is the son of the engineer who had designed the most recent renovation in the 1970s.

Principal Kyle Brenner spoke for his students at Worcester Tech by saying that it was “an honor to have been involved” in the bridge construction. His students gave the honored guests commemorative medals and hats, which were designed in-house. A Worcester Tech carpentry grad, Ben Lapin, built a scale model footbridge, which was used to display cupcakes for the ceremony.

President Leshin said that watching the progress of the bridge project made her feel like the proud parent of “wicked smaht” students with a “maker mentality.” She said that having a major project in Worcester dovetails with the 40-plus other project centers that are supported by the university worldwide. She continued the family gathering feel by noting that principal Brenner is also a 1990 civil engineering graduate of WPI. 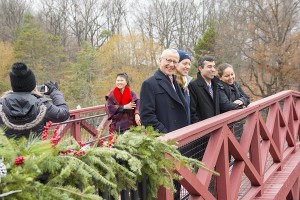 Tim Murray, of the Worcester Regional Chamber of Commerce, was not the only speaker to point out the connection between the Hiatts and education. He reminded the gathering that the Jacob Hiatt Elementary school in Main South is named after Mrs. Kraft’s father, and that he also started the Jacob Hiatt scholarship program, which is still in existence today.

The Rotary Club helped the cause with fundraising that surpassed all goals, and that organization was represented by both president Robert Managan and former president Satya Mitra. When Mitra thanked members of the coalition who had contributed their talents to the completed bridge, he introduced Robert Kraft as “Mr. Myra Kraft.”

As he started to correct himself and apologize, Kraft shouted, “You got it right!”

The Hiatt family has deep roots in Worcester business and philanthropy. Augustus had pointed out that the Hiatts were founders of the company that would become Rand-Whitney Corp., which is still located in Worcester and is currently expanding its floor space. Kraft noted that he and Myra actually began their family together in Worcester, with a wedding at Myra’s family home.  He paused to collect himself as he related that he had just driven by that house minutes earlier.  With their son Josh’s participation in the Boys and Girls Club of Boston, he stressed that the family tradition of giving to the community continues.

The emphasis of the day was on the teams that had worked together to help build the bridge.  Said Kraft, “When you want to win, you’ve got to build a team.” He said that Myra Kraft was known for bringing “all people, all communities, together” in partnerships meant for the common good. 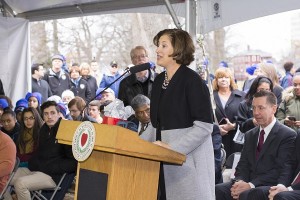 As he thanked the Worcester Tech students for their participation, he said that he had gotten a call from Mayor Petty about the day’s program. He learned that some of the Tech Eagles were going to be allowed to participate in the dedication ceremony. He replied that after the Patriots’ weekend loss to Philadelphia, the Worcester Tech mascot was the only sort of eagle that he liked.

Lt. Gov. Karen Polito began her remarks with a recognition that Mrs. Kraft chose to make her life about giving. She said later that the scholarships will “continue the legacy of Myra Kraft to support the community here in the heart of the Commonwealth. WPI and Worcester Tech will be able to help many more students to be able to achieve their dreams.”

She added, “The Kraft family continues to be a class act.”

When he left the podium, Kraft said he intends to be back to visit Worcester again soon. “I will be coming back to continuously traverse this bridge!”