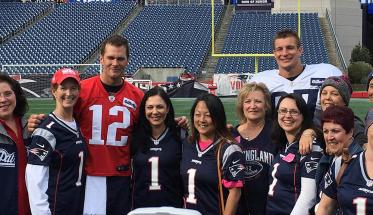 The car the New England Patriots sent pulled up to her home promptly at 7 a.m., and Ann McCarron jumped in, expecting a nice meal and maybe a little yoga as part of her Patriots Day of Pampering to honor breast cancer survivors.

What the 51-year-old associate athletic director at WPI got was one of the best days of her difficult year, and an experience she says she will never forget.

As one surprise after another unfolded, McCarron says she was given the gift of having one entire day where there was so much laughter, so much pampering, relaxing, and camaraderie that she completely forgot about her breast cancer.

“It was just phenomenal,” she says.

Forgetting about her diagnosis has been difficult for McCarron since the beginning of the year, when doctors discovered that the cancer first diagnosed in 2014 had spread to her liver.

The cancer was discovered early, at Stage 1, after a routine mammogram, she says. And after surgery and chemotherapy she was hopeful for a successful outcome.

Her breast cancer is typed as triple negative—however, a particularly difficult form to treat—and when it came back, doctors told her the disease can no longer be cured, but can be managed with treatment.

“But what it has done for me is changed the philosophy of my life. I now cherish each moment of each day, and really try and live in the moment,” she says. 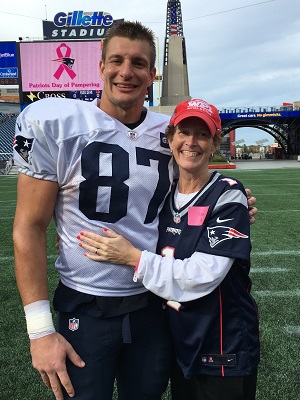 McCarron took that philosophy along with her on the ride to Foxborough on Oct. 14, where she and the others were met by former Patriots linebacker and Hall-of-Famer Andre Tippett, now the team’s executive director of community affairs.

The group was served a “healthy” breakfast of fruit, yogurt, and granola in the stadium club, and then treated to a yoga class and massage.

“We knew that was part of the day,” she recalls.

They didn’t know all the other meticulously planned surprises that were coming, though.

McCarron says she had opened an email from Nicola Deary, community manager at Making Strides Against Breast Cancer, in early October indicating that she had been selected for the day of pampering.

She says she was likely identified because she has been a regular participant in the Making Strides for Breast Cancer Worcester walk, and because the kick-off this year had been at WPI, where she had met Deary.

“She remembered me,” McCarron says.

She received a care package in the mail from the Patriots shortly after receiving the email, with T-shirts, hats, pins, a yearbook, programs, and an official invitation from the team.

“All we knew was we’d be picked up by a driver, and pampered,” she says.

After yoga there was a massage and a manicure, and sessions with a Reiki practitioner and a nutritionist.

Then there was a lunch of sandwiches with team owner Robert Kraft.

“He personally invited us to the game that Sunday with a guest,” she said. 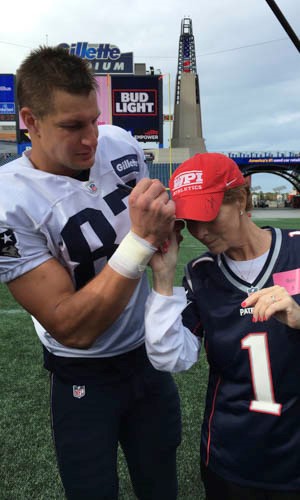 They ended up going onto the field before the game against the Cincinnati Bengals, quarterback Tom Brady’s first game back from serving a four-game league suspension.

“There were 150 survivors and our supporters, so 300 of us on the field making a big pink ribbon on the field,” she says.

“I really can’t thank the Patriots enough for the support I felt,” she says.

McCarron said she wore her WPI hat through the day, and was immediately recognized by Kraft, who remembered the project by WPI and Worcester Technical High School students to build the Myra Hiatt Kraft Memorial Footbridge at Elm Park in Worcester.

“I was really proud to be representing WPI,” she says.

After lunch they went to Muse Paint Bar at Patriots Place, where despite what she calls her limited artistic talent, McCarron and the group laughed away a couple hours at a painting lesson.

At each stop there was a professional photographer capturing each moment, she says.

“Another surprise in itself,” McCarron says.

For the lifelong Patriots fan, walking through the tunnel and onto the field was a thrill. “Absolutely exhilarating!” she exclaims.

But there was more.

The women were presented with Patriots #1 game jerseys with their names on the back, and a group photo was flashed on the Jumbotron.

“And then, all of sudden, Gronk and Tom Brady come running through the tunnel to greet us,” McCarron says.

“They were so nice, really thoughtful, and really caring,” she says.

There was one more gift, an Alex & Ani bracelet, before the car arrived to take her home.

“By 7:30 that night there was a video and photo album from the day sent to our email,” she says.

“I’m looking at some of the photos on my phone right now, and just thinking about what an extraordinary day it was,” she says. “This is a gift that I will cherish.”

The New England Patriots also covered this story; visit their website to learn more about the day, and check out a video and photo gallery.