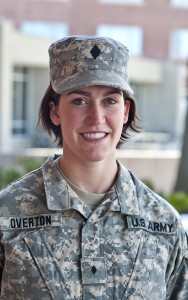 As a high school student at Tantasqua Regional High School fascinated by biology and devoted to learning, Marlisa Cardoso Overton dreamed of attending WPI. But she worried how she would afford it.

That’s when her uncle stepped in and offered to pay her tuition for all four years. Her Uncle Sam, to be specific.

While in high school, she learned about the Reserve Officers’ Training Corps, or ROTC, program. Intrigued, she applied and was interviewed by officers involved with the program. Different levels of scholarships are offered and she earned the top honor: The ROTC would pay all four years of undergraduate tuition.

In exchange, she would agree to serve one year in the Army for each year of scholarship, or four years, in her case. When she graduates from WPI in May, she will be commissioned as a second lieutenant in the Army, where she plans to join the active duty medical services corps. She will likely become a platoon leader of about 40 medics, with plans to enroll in the Army’s physician’s assistant program.

For Overton, a small-town girl from Brimfield who said she “hasn’t been that far from home’’ in her life, the future offers limitless opportunities.  “I’m looking forward to the chance to travel,’’ she says. “I think there are a lot of good opportunities for me ahead.’’ 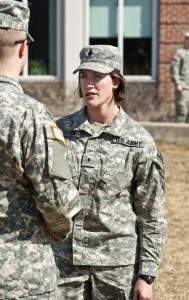 Before she is even commissioned, she has already known impressive success in her military career. She is ranked 12th among 6,000 ROTC college cadets nationally, and just this week was awarded the Pallas Athene Award, which since 1983 has been presented annually by the Women’s Army Corps Veterans’ Association to outstanding Army Senior ROTC Program women cadets from each of the four ROTC regions.

That ranking was announced at the Leadership Development Assessment Course, which she and her fellow ROTC college cadets attended last summer, the summer after their junior year.

Cadets are ranked based on their performance at the leadership course and in ROTC overall, academic ranking, extracurricular activities and leadership abilities.

Receiving the honor was “unreal,’’ she says. “I still can’t believe it, to be honest. I’ve always prided myself on my hard work and academic achievements, but who knew it would pay off so well? I honestly couldn’t have done it without my awesome support group.’’

That support group includes her family, friends, fellow cadets, and “cadre,’’ the ROTC term for instructors and support personnel. “We have an awesome cadre,’’ she says. “I don’t think I would have done as well without their expertise.’’

Serving as an ROTC cadet in college adds an extra level of responsibility to an already demanding WPI schedule. In addition to the traditional course work, she took a class each year aimed at preparing cadets for the summer leadership course after their junior year and for their post-college commissioning as Army officers. There is also a thrice-weekly physical education requirement, starting at “0500 hours,’’ or 5 a.m. in non-military terms, on Mondays, Wednesdays, and Fridays.

She also participates on a Ranger Challenge Team, which she describes as “a varsity sport for ROTC.’’ Teams of 10 cadets compete in physical challenges such as assembling and disassembling weapons, marksmanship, building rope bridges, and navigational skills testing.

These challenges test cadets’ physical and mental toughness, she says, and, above all else, their sense of teamwork. In the military, the ability to work as a unit can literally save lives, she says. Teamwork is a “big aspect’’ of ROTC, she says. “If you can’t work as a team, there will be no success for you.’’

All of this is in addition to a full course load for her major in biomedical engineering. She has earned a consistent grade point average of 4.0. 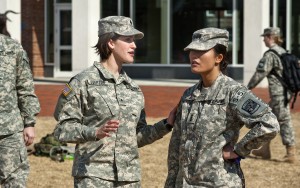 And she is no stranger to a personal life: This past New Year’s Eve, she married former classmate Greg Overton, who graduated last year. He attended the Air Force ROTC program and now works at the Pentagon in Washington, D.C.

Making time for her new husband and her friends was crucial to her success, she says. “It all comes down to being able to keep a schedule,’’ and to start on assignments quickly to keep pace, she says. Her relationships with her husband and friends serves as a much-needed “break … to try to refresh.’’

With her ROTC years nearing an end, she calls the decision to participate “the best decision I’ve made.’’

ROTC “made me a little more willing to take risks,’’ she says. “Overall I’m a much more motivated and determined person. I always want to do my best and be the best I can be.’’