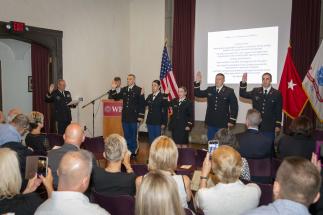 Injuries and other complications kept these cadets from completing their mandatory six-week leadership assessment at Fort Knox, Ky., in time for the traditional commissioning ceremony in May. 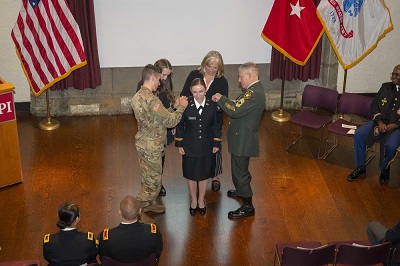 “The ROTC program is a leadership program first and foremost,” said Army Capt. Mark Liarikos, assistant professor of military science at WPI. “One of the big things they have to do to is finish Advanced Camp at Fort Knox, Kentucky. It is one of the most challenging things you can do. They are in the field dealing with thunderstorms and hot conditions in the South in July or August. It is grueling.”

During the ceremony, second lieutenants Rachel Murphy, Connor Sakowich, and Justin Silkey of WPI, Kyle Leblanc of the UMassLowell, and Laura Lopez of Holy Cross, took their oath and were presented with their commissioning certificates. Then, the gold bar denoting 2nd lieutenant was pinned on their uniforms and they exchanged their “first salutes” as U.S. Army officers.

“You’ve completed countless hours of training,” he said. “You’ve successfully passed many tests of your intellectual abilities, your physical readiness, your leadership skills, and even your character. You had the determination, the talent, and the grit to arrive at this milestone, and so I speak for all of us here tonight when I say, 'Job well done!'”

Smith told the cadets that they will be entrusted with leadership of the nation’s greatest treasures—young men and women, who, like them, pledged to defend the U.S. with their lives.

“Because of your rank and their training, they will follow your orders, but you won’t really lead them until you earn their trust and respect. You will be challenged to place the welfare of your soldiers above your own well-being. And 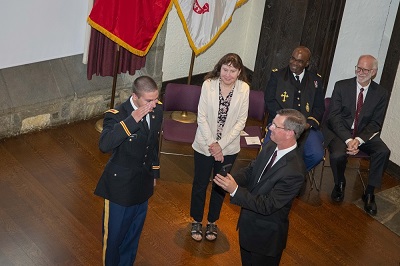 you may be called to even provide for their safety first while endangering yourselves. But, if you can do these things, you will be trusted, respected, and perhaps even loved by your soldiers. The safety and security of our nation depends on your ability to become a leader and lead with courage, wisdom, and fidelity to your oath.”

Lt. Col. Adam Heppe, head of WPI Military Science, pointed out that the cadets had dedicated countless hours to the program while simultaneously carrying a full academic workload—with some playing varsity sports, and others working part- or full-time jobs.

“What makes these cadets unique and why we all are here on this September evening is that at some point their ROTC journey was derailed by injury,” Heppe said. “From an ACL tear on the football field, to an unfortunate encounter with a log splitter, these cadets literally had to battle back from their injuries to earn their commission. Ladies and gentlemen, we call this grit and this attribute is exactly what we look for in our future leaders.

“You are joining a prestigious group of officers, warriors, and leaders,” he said to the newly minted officers. “Your commitment to excellence will serve you well as you embark upon your next great challenge.”

Sakowich,’19, a civil engineering major from Salem, Mass., will report to the Infantry Basic Officer Leadership Course at Fort Benning, Ga. After the 19-week course, he will train at the U.S. Army Ranger School and Airborne School. He received his first salute from his friend Cpl. Jake Zwart and was pinned by his parents, Julie and Rich Sakowich, and his girlfriend, Victoria Nassar.

“It was a great feeling to finally be pinned and receive my first salute,” Sakowich said. “It was tough watching the rest of my class commission in May, but perseverance and patience prevailed and it was an awesome moment.” 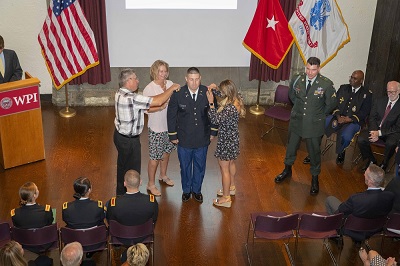 Silkey ’19, an electrical and computer engineering major from Hubbardston, Mass., will report to the 101st Engineer Battalion of the Massachusetts Army National Guard. In May 2020 he will report to the Engineer Basic Officer Leadership Course (EBOLC) at Fort Leonard Wood, Mo. When finished training, he will come back to Massachusetts and begin his time as an engineer platoon leader.

Silkey was pinned by his parents, Heidi and Carl Silkey, and received his first salute via Facetime from his older brother, Spec. Brendan Silkey, who could not attend the ceremony. He credits WPI’s project-based learning model for preparing him for his military career and beyond. “WPI, in more ways than one, prepared me for the next phase in my life as it focuses on project-based learning, which allowed me to work and communicate with people that I would not have otherwise,” he said. “This, in turn, I believe, helped me fine-tune my leadership skills, which will be helpful in both the military and the private sector in the future.”

Murphy ’18, of Mendon, majored in computational biology at WPI and was commissioned as a second lieutenant in the Army Signal Corps. She was pinned by her parents, Patrice and  MSG Robert Murphy, Ret., her sister, Robinsage, and her brother, Rutger. She received her first salute from her father.