Fifth Annual Clothesline Project and Take Back the Night 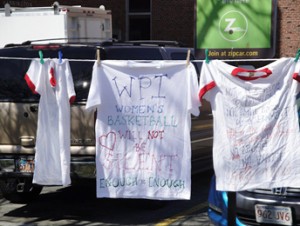 For the fifth year in a row, two groups from WPI will spotlight issues of sexual assault and violence with the Clothesline Project and Take Back the Night events on Thursday, April 3, on the Quad.

Sponsored by SAVE (Sexual Assault and Violence Education) Committee and SPARC (Students Preventing Abuse and Rape in Our Community), the two events include speakers, information, free food, and even raffle tickets for donated prizes. With the tagline “Break the Silence, End the Violence,” the events are designed to bring awareness to very difficult topics.

“It’s so important to break the silence and to break the stigma around this,” says Erica Tolles, associate director of the Student Development and Counseling Center and chairperson of SAVE. “These can be uncomfortable conversations and emotional conversations. We are saying we aren’t going to be silent.”

Beginning at 11 am, community members from WPI and Worcester can design a T-shirt for free in honor of anyone who has been impacted by sexual and domestic violence. The Clothesline Project is a grassroots idea begun in 1990 on Cape Cod to raise awareness about violence against women and to empower survivors and their loved ones.

Sarah Monteith, co-president of SPARC, says students can look for sexual assault awareness information during the week leading up to the event day, and there will be raffle tickets for sale, as well. “[This helps] to grow our community into something that may not be free of these issues,” she says, “but that understands what to do if they occur, and how to prevent them when we can. We can do all the trainings we want with people, but Take Back the Night has the powerful effect of making these things that seem so foreign to many so very real.”

“I hope this event can empower the survivors and those who love them alike.”

When WPI began Clothesline Project events, they had just a handful of T-shirts. Each year the collection grows and now is well over 100, says Tolles, who notes she hopes to add at least another 15 to 20 T-shirts this year. “They are very personal,” says Tolles, “and they can be in support of someone, in memory of someone, or just to speak out.” Some T-shirts speak to perpetrators of violence, directly addressing them and their actions. The groups will provide resources and information about the issues, as well.

At 5 pm, students may attend a free BBQ before Take Back the Night begins at 6 o’clock. Take Back the Night will include speakers from the community as well as students who will talk about violence. An open mic time will follow for anyone in the audience who wants to speak about violence in their own lives or the community. Past open mics have included musical and dance performances and poetry readings. The night will conclude with a candlelight vigil and a moment of silence.

“This is amazing,” says Tolles, who calls this an emotional and moving event. Kate Gillis, a member of SPARC, came to Take Back the Night Last year and was so moved that it galvanized her to do more. “It was so powerful,” says Gillis of the event. “Lots of people don’t recognize that this is a big problem on college campuses. Some people assume sexual assault happens, but won’t happen here, or they think it won’t happen to them or that it hasn’t happened to anyone they know.”

“The Clothesline Project and Take Back the Night is the start of a movement where we come together to give each other courage and understand who we each are in the hopes for a better tomorrow,” says Monteith. “Together we can do extraordinary things. I hope this event can empower the survivors and those who love them alike.”

In case of rain, the events will take place in Riley Commons. For more information, visit  facebook.com/events/547734935344297 or email Kate Gillis at kagillis@wpi.edu.