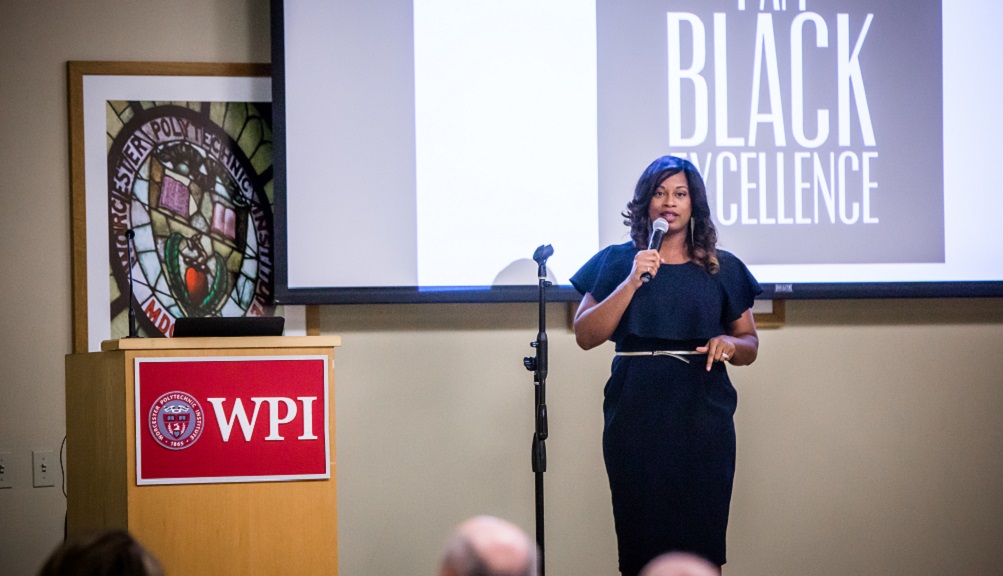 Mentor, advisor, and professor at the University of Cincinnati Whitney Gaskins played a game of “two truths and a lie” with the members of the audience during her keynote at the Black History Month Dinner last week. She shared three stories that she said altered her life, and then asked them to choose which two stories were true.

Gaskins, a biomedical engineer who focuses on engineering education, gives motivational speeches about stereotype threat in the classroom, in the workforce, and in the daily lives of people of color.

Sponsored by the Office of Multicultural Affairs and the National Society of Black Engineers, the event in the Rubin Campus Center Odeum also celebrated the outstanding achievements of black Americans with an evening of jazz and a performance by the WPI Step Team.

Placed on the dinner tables were photos and biographies of great black leaders, outlining their contributions.

After delivering the opening remarks, Charlana Simmons, director of the Office of Multicultural Affairs, led the audience in singing the Black National Anthem before Gaskins delivered the keynote.

“Black excellence is black history,” said Gaskins, who is sometimes referred to as the “Princess of STEM.”

She described herself as an “empowerment enthusiast” who advocates exposing young students in grades K-12 to STEM so they can “be an engineer like me.”

Gaskins's first story took place when she was 5 years old, the only black child at a new school, she said. She was nervous because no one “looked like” her as they did when she went to preschool. She was excited on art day (her mom being an art teacher) and she was eager to make papier maché with classmates. She said she asked her teacher permission to go to the bathroom and when young Gaskins went to wash her hands, the teacher told her “no.” Gaskins asked again and was told no, and when she persisted, she said her teacher locked her in a closet for the entire day, where she soiled her pants. She said she was finally discovered crying alone in the closet when her sister came looking for her to get on the bus at the end of the day.

The second story was about her father—a physics teacher and her best friend. Gaskins was away at college when she said she received a call from her mother who told her that her father was sick in the hospital back home in Cincinnati. When she got to the hospital, she found out her father had brain cancer that doctors had been trying, unsuccessfully, to treat for more than a year. She said she knew she would have to leave school to get a job to help take care of her family financially, but just before her father passed away, she crawled into his hospital bed with him and he made her promise not to drop out of school. Though she said her father never cried, one tear rolled down his cheek as he begged her not to drop out. She said she promised him she wouldn’t.

“People think black history is just about pain and suffering, but it is just as much about joy, celebration, and excellence … showing who we are and the pride we have and where we come from.” -Whitney Gaskins

Her last story was about a professor at the University of Cincinnati's Lindner College of Business, where she was working to obtain her MBA in quantitative analysis, who told her, “I don’t think you’ll make it here. We don’t get a lot of students who look like you,” she said. After that, she was failing, but said she discovered when talking with a fellow student receiving A's and B's that although she was providing the same answers, she was receiving failing grades. When she questioned the professor, she said he told her he was not racist and had no issue with other students of color. Gaskins said the professor told her to “get on the bus and take care of your kids and don’t talk to me,” even though she didn’t have any children. She filed a grievance and switched classes, but the professor wasn’t fired, she said.

As the audience tried to decide which of the two stories she shared were true, Gaskins told them that all three were.

“I tell these stories because I am black excellence,” she said. “So many times things happen in your life. Don’t let them get you down. Defeat them and rise up. I stand on the shoulders of my ancestors.”

Gaskins, who earned her PhD before she was 30, said it is “easy to forget where you come from.”

“People think black history is 1968 and before, but we’re making history every day, walking these halls, doing research, working in industry,” she said. “These pioneers you have on your tables, Obama, Angela Davis … you’re capable of the same things, too. One day you’ll see your picture on that table. With the adversity I went through, you can’t tell me you won’t be here, too, and one day I’ll hear the story about your life.”

She told them to "just be great" and to not settle for mediocre.

“We are what we repeatedly do. Excellence is not an act, but a habit,” she said. “Who wants to be mediocre? Being excellent is a great feeling. I live and breathe to be excellent every day. I may not be successful at it every day. Sometimes I give myself a D, but other days I give myself an A-plus.”

She also encouraged them look for support that may benefit them and build up their support systems.

“If you didn’t learn anything from Black Panther, know that you should trust black women. Black women are strong,” she said. “People think black history is just about pain and suffering, but it is just as much about joy, celebration, and excellence … showing who we are and the pride we have and where we come from.”

The evening ended with an outstanding performance by the WPI Steppers, formerly known as the Crimson Steppers, who had taken a year off, said club president Rita Bagala, a senior majoring in civil engineering.

Metasebia Dejene ’20 started the performance a cappella with a song she said she wrote for step.

“Now we’re back with more moves and better than ever,” the group said. “Step is made of strength and power, and that’s what’s in our blood.”

The eight women on the step team ended with a performance stepping to Beyonce’s “Freedom,” considered a protest anthem against police brutality and killings with a message of people living together in peace and equality for all.