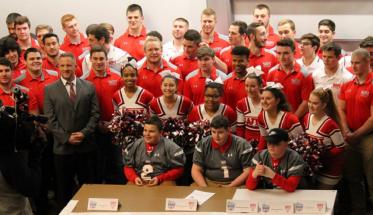 In his 13 years, Keegan Concannon has had his share of eventful days. Last Wednesday would have to rank among the tops.

Signing a contract in front of family and friends in Upper Perreault Hall of Fuller Labs, he was formally “drafted” and celebrated as the newest official member of the WPI football team.

WPI assistant football coach Scott Sperone opened the draft proceedings by saying that the team was looking for someone who had “a desire for success, among other things.” And they wanted to pick someone who had already shown “strength in his life.” The cheerleaders, football players, Pep Band, mascot Gompei, friends, and family then filled the room with music, cheering, and multiple standing ovations as Keegan's selection in the first round of the draft was announced. 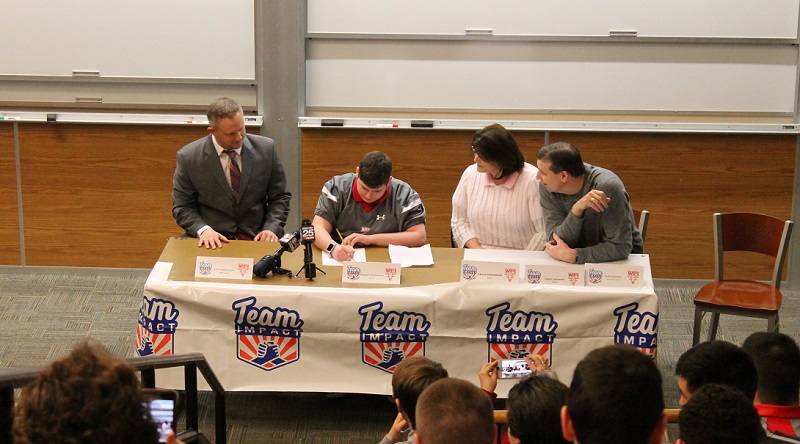 Keegan signs on to the WPI football team.

Keegan's mother, Laura, explained his difficult path to this point. From the serious health issues he has bravely faced from birth, to his diagnosis of common variable immune deficiency—a rare immunodeficiency disorder—to keeping up with his schoolwork, his life has been fraught with struggle.

His body has never been able to defend itself from infection. He is regularly fighting upper respiratory infections, tonsillitis, sinus infections, and nasal and ear growths. The bones in his ears are regularly at risk, threatening his hearing. The regular home infusions, hospitalizations, and more than a dozen surgeries, have limited his opportunities to socialize or have a typical educational experience. Exposure to an incurable infection is a constant threat. All these issues have resulted in Keegan's missing about a third of his school days each year.

This year, things have started to turn around. Laura said that their family's experiences with his new school superintendent, Marco Rodrigues, have been amazing. Rodrigues sat with family members on his first day in office, took the time to watch a video presentation that Keegan had produced, and then took it upon himself to learn even more about his condition. He has welcomed the opportunity to continue the eighth grader's education by thinking outside the conventional box. 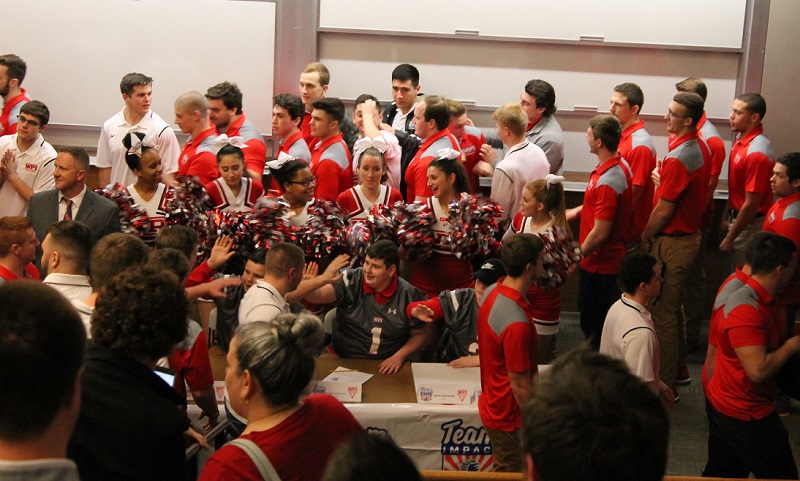 The Grahamtastic Connections foundation has provided Keegan with a laptop computer and a VGo robotic telepresence to help provide two-way remote communications with the people in his classroom. One of his former teachers presently acts as his home tutor. The new school administration has welcomed this unorthodox, though effective, combination method of learning.

Laura also appreciates the work that Team IMPACT did to make this sports collaboration happen. [Team IMPACT is a national nonprofit headquartered in Boston that facilitates connections between children facing serious or chronic illnesses with college athletic teams to form lifelong bonds, creating life-changing outcomes.] Since 2011 Team IMPACT has matched more than 1,400 children with more than 500 colleges and universities in 47 states, reaching over 35,000 participating student-athletes. The organization uses a number of criteria to match sports teams and children. Keegan was already a football player, having played defensive lineman for his Quinn Middle School team, so he had an understanding of the requirements of team participation.

Coach Sperone explained that the collaboration between the team and the youngster is beneficial for both sides. He says that 10 or 15 players generally volunteer to take the lead in the interactions, attending movies, basketball games, or hockey games together, for example. Taking the child to various events outside of football improves social possibilities for the child, but it also lets the student-athletes appreciate the difficulties of people who are not as fortunate as themselves. The players are rewarded by learning things about overcoming obstacles and “strengths that can develop outside of what they see in the weight room.” He says that the players can get even more of a positive impact from the relationship than the child does. 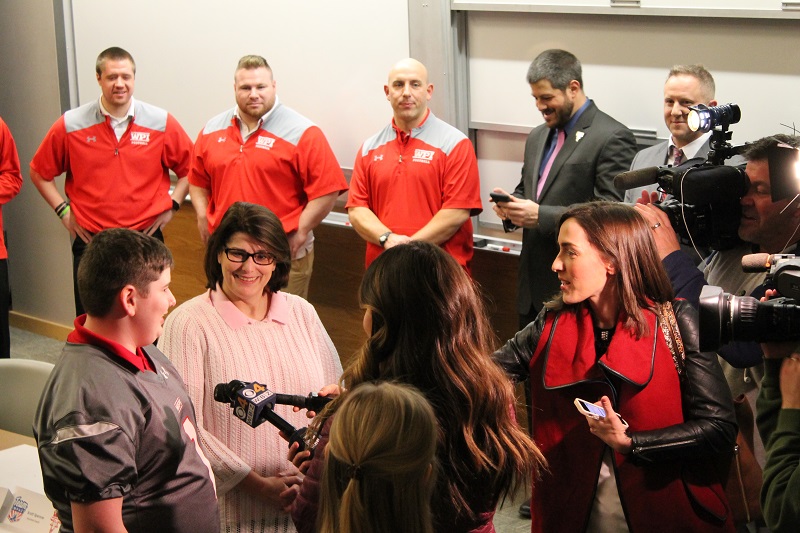 Keegan is interviewed by Channel 4 and
Worcester News Tonight.

For several years, WPI head football coach Chris Robertson has seen the mutual rewards that these collaborations can bring, having spearheaded the effort for the football players to give back to several communities that are in need of positive leadership. From their interactions with pediatric cancer patients to tutoring and playing with elementary kids in the inner city, his players have learned that being a role model is part of the privilege of being a student-athlete at WPI. Robertson says that other WPI athletic teams are in line to join the movement. The crew and baseball teams are planning similar programs for later this year.

“Being on the WPI team has been an uplifting component of his life!" Laura said to the crowd. "We are forever thankful.”

Then, the Pep Band struck up the WPI fight song, cheerleaders hollered and cheered one more time, and all the football players ran past Keegan’s seat at the front of the auditorium and individually gave him a high five, as if their actions would formally seal the agreement.

Keegan closed the presentation proudly wearing his Number 1 WPI football jersey and standing between his two buddies, Ryan Yeats and Ethan Buschy, who were chosen in the second round of the same draft. He addressed the assembled supporters saying, “With my parents and this great team behind me, I know that there is nothing I cannot do!”