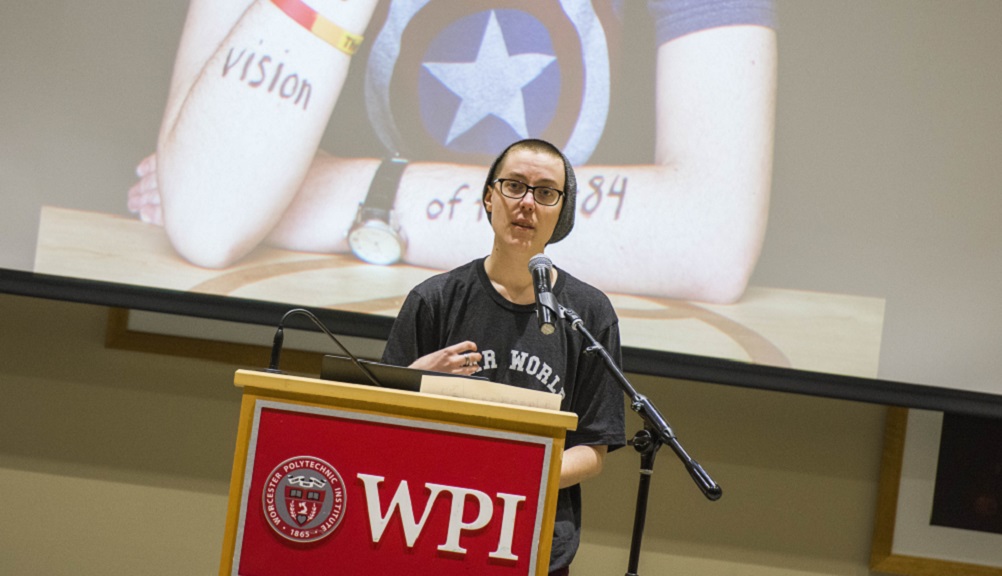 Writing a thought in 280 characters on Twitter can be tough.

That’s nothing, though, for those who attended an event this week featuring Dear World, an internationally renowned portrait and storytelling project. Participants were able to summarize a part of their life story on their skin. In one line.

Dear World, which has been featured on USA Today, NBC, CNN, and Buzzfeed, visited campus on March 20 to present its live show and celebrate the personal stories of WPI’s community members.

“Dear World provides an opportunity to ask community members to share experiences that have shaped their lives in some way,” says Christine Sharry, director of student activities. “It’s a special program that celebrates differences, but also highlights pieces of our community fabric that bring us together.”

About 180 students, faculty, and staff participated in the event, which included sitting in on one of the two Dear World workshops during the day. Led by organization leaders, the workshops focused on writing exercises designed to encourage people to think about key themes and memories that influenced their lives. Participants then partnered up and shared their stories out loud, and collaborated on which significant handful of words would be written on their skin.

Once the words were written, participants were photographed individually; those photos were then featured in a slideshow during the “reveal” portion of the event, which took place in the Rubin Campus Center Odeum later that evening.

During the reveal, two students stepped on stage to share their Dear World portraits and tell their stories to a full audience:

• Harsh Rana ’19, a computer science major, stood under the photo of himself with the words “There’s only food for 3” written in black ink on his arms. He then recounted his story: After his parents divorced, he and his two siblings lived with his father in India. Every night, Rana and his brother and sister waited for their father to come home from his job as a surgeon to eat dinner. One night, after coming home, Rana’s father set only three plates for dinner, and gave one to each of his children. Rana and his siblings saw that their father did not have a plate, and asked why. “There’s only food for three,” he replied.

Rana told the audience, “My father broke down. He was the strongest man I knew. I got him a plate, and we shared more than food that night.”

• Gwyneth Zelmanow ’21, an electrical engineering major, shared why she had the phrase “So I bought my 9 hour bus ticket” inked on her arms. She said she grew up in Maine, and always loved and felt safe at school. The same sense of security followed her through to WPI, until the high school in Maine from which she graduated received a threat that it would be “shot up.”

“It was the day after the Parkland shootings happened,” Zelmanow said, referring to the mass shooting at Marjory Stoneman Douglas High School in Parkland, Fla., last month, in which 17 people were killed.

“I was afraid for my brothers [who now attend the school in Maine]. I cried myself to sleep for a week," she said. "I knew I had to do something, so I bought my nine-hour bus ticket to D.C. [for the March for Our Lives]. … You’re never too young for your voice to be heard.”

Between the WPI students’ stories, Cassandra Corrales, a program lead and storyteller for Dear World, showed the audience videos of other stories the program captured—one about the daughters of the late ESPN sportscaster Stuart Scott, who died from cancer in 2015; one about the first responding officers to the scene of the Pulse nightclub shootings in Orlando, Fla., in 2016; and one about 86 former child slaves in India.

This is a “platform for people to share their stories, to remind us of the value in stories, and that everyone has a story,” Corrales said. “We all have layers to share.”

The reveal ended with a slideshow of the 132 unique portraits of WPI community members who attended the Dear World workshop, and bared their one-line stories on their skin. Community members were encouraged to ask the people in each photo about their story, and to get to know them.

“I hope that students and all our community members appreciated the opportunity to share a story that is special to them," says Sharry, "but also that people continue to exchange and share their stories with others. The practice of this extends beyond just a one-hour program on campus, but rather provides an opportunity for continuous dialogue, sharing, and understanding.

“I was inspired and touched by the stories I heard," she continues. "The program confirmed for me that the experiences that have shaped our community members is what helps make WPI such a special place.”