With only eight days left in the countdown to President Laurie Leshin’s inauguration, WPI is celebrating trick-or-treat style. 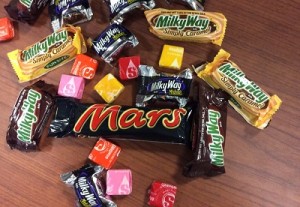 Be sure to stop by the Rubin Campus Center today to pick up a handful of space-themed candy, including Mars bars, Starbursts, and Milky Ways. The celestial theme honors President Leshin’s (@LaurieofMars) background as a geochemist and space scientist, including her impressive career at NASA.

And, as director of development communications Judy Jaeger notes, some of the confections were nearly out of this world: Because Mars bars aren’t sold in the U.S. anymore, WPI had to go outside the country to obtain them.

Which gives you all the more reason to hurry over to the giveaway, which starts at 11 a.m., and lasts until all the treats have been given out.

And if you’re planning to head out to the big game against Sarah Lawrence on Saturday? During halftime, the Pep Band will give a special rousing performance with an inaugural twist: Their show will feature the WPI Alma Mater, as well as special formations in the number 16 to honor Leshin, the 16th president of WPI.

The inauguration – which coincides with WPI’s 150th anniversary – embraces both the past and the future with the sesquicentennial theme of #imaginemore. Be sure to keep an eye out as the countdown continues.

“There’s a lot coming up that’s exciting, that the community will want to be a part of,” says Jaeger.