• In 10 days, WPI will inaugurate Laurie Leshin as our 16th president. The Inauguration also kicks off the university’s 150th anniversary celebration. To set the stage for two such amazing milestone celebrations, a Countdown begins today, and so does the fun. 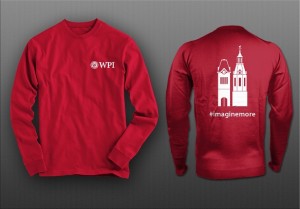 The Countdown begins today at 11 a.m. at the
Rubin Campus Center, with this handsome
T-shirt being given away.

The Countdown is a nod to President Leshin’s time at NASA, but it’s also a fun way to build anticipation for what promises to be an amazing Inauguration Celebration. It’s also a thoughtful way to mark the university’s “launch” into the next 150 years with an approach that embraces both the past and the future.

The Inauguration has been a community-wide planning effort involving trustees, students, faculty, staff, and alumni, and so the main events—and all of the festivities leading up to it—have been thoughtfully planned with the entire WPI community in mind.

Building upon the sesquicentennial theme of #imaginemore, this Countdown will manifest in three distinct ways:

Countdown begins today at 11 a.m. with a T-shirt giveaway at the Rubin Campus Center.

Other promotions this week will include a space-themed candy giveaway on Halloween (also to begin at 11 a.m. at the Rubin Campus Center), and at Saturday’s football game, the WPI Pep Band have a special surprise in store.

Next week will include the premier of a cool new video, and attendees of Fall Fest (held in Morgan Wedge) will have an opportunity to receive some very cool crimson and gray fleece scarves that have WPI “etched” into the fabric using a brand new technology.

Other surprises are in store, and it should be noted that supplies are limited and all items are offered on a first-come, first-served basis.