Ciaraldi’s Passion for Storytelling and Writing Leads to the Stage

Fortunately for the WPI community and the Worcester community-at-large, computer science and robotics engineering professor Mike Ciaraldi’s storyteller dad passed his gift on to his son.

Ciaraldi majored in physics at Cornell and obtained two master’s degrees in computer science at Rochester Institute of Technology and the University of Rochester. He kept his literary talents relatively hidden for years while excelling in the computer science field.

“My dad was a storyteller,” he says. “He was always telling jokes and stories to people and I think I inherited it from him.” 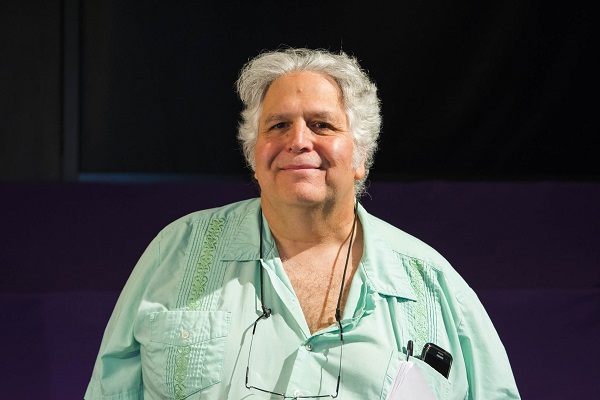 Debuting in St. Joseph's Christmas pageant in 5th grade more than 50 years earlier, Ciaraldi would finally give in to his passion and write his first play in 2001.

“When I was young, I always had an interest in live theatre,” says the 65-year-old professor, who has worked on several competition-winning projects with WPI’s robotics team. “I remember back in high school seeing a professional performance of Mary, Mary. It came by in a touring company in my hometown of Rochester, N.Y. Before starting at WPI, I was living in the area and I would come to New Voices and other plays. When I started working here, one day I was watching a New Voices performance and thought, ‘I could do that.’”

That was in April 2001. The following Christmas season, Ciaraldi recalls, he boarded a plane to visit his parents in Florida and started writing his first play on his laptop, called First Date. He had half of it written before landing, and completed it in the next day or so, submitting the play for performance when he returned home. It was accepted and a performance was produced by WPI's New Voices  (the nation's longest continuously running collegiate new and original play festival), now celebrating its 35th year.

Dozens of plays later, he is running WPI’s Playwrights Workshop, designed as a practicum that students typically take as the final course to fulfill their Humanities and Arts requirement. By the end of the course, each student is expected to produce a play suitable for New Voices.

Ciaraldi recently attended the Bouchercon convention of mystery writers and is writing with Alpha Psi Omega’s “Show in 24 Hours.” He also writes short stories, one of which was published two years ago in the Alfred Hitchcock Mystery Magazine. He says he would like to eventually self-publish a book of his short plays.

“With a straight face, I can actually call myself a professional writer because I got 25 whole dollars,” he says. “I’ve never been shy about speaking in public and being a professor fits that well. Being at WPI is perfect because there are so many students who are so bright and talented and it never gets dull.”

Ciaraldi is also doing a little stand-up comedy these days.

“Every year we [Computer Science] hold a coffeehouse, and a few years ago some students asked me to participate,” he says. “I told them I don’t sing or play an instrument and they said, ‘No. Tell jokes.’ For four years I’ve been doing stand-up comedy at the coffeehouse.”

“Being at WPI is perfect because there are so many students who are so bright and talented and it never gets dull.” -Mike Ciaraldi

Those interested can catch Ciaraldi at Alpha Psi Omega’s 15th annual “Show in 24 Hours,” Saturday, Dec. 9 at 7 p.m. in the Little Theatre on campus.

All teams—usually groups of 2 to 4—participating in the event will meet the evening before the show for dinner and then the playwrights will spend all night writing, he says. "Each writing team gets matched with a director, then chooses its cast from the participants who want to appear on stage. Each team writes all night, while another group is building the set."

“On Saturday morning, we turn [the plays] in and spend all day Saturday rehearsing for the show Saturday night,” he explains. “This is the eighth year I’ve participated in that. We don’t know who our writing partners will be ahead of time, and we’re not supposed to think too much ahead of time what we’re going to write about. One year, we did a play about the downfall of the Roman Empire—caused by zombies. Three years ago, we did a musical about the Hundred Years’ War and wrote new songs, including one about the Black Death to the tune of ‘I Will Survive.’”

The plays written overnight—about five, lasting roughly 20 minutes each—will be performed in the “Show in 24 Hours,” he says. The event is free and open to the public. Donations are accepted. Visit Masque's website for more information.