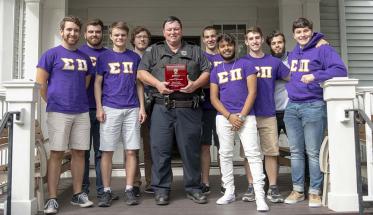 Officer Robert Vandal received the Dr. Robert L. Burns Award for his work as the advisor to the WPI chapter of Sigma Pi

Officer Robert Vandal has been keeping the peace for four decades, both on and off campus. Along the way, he’s made the rounds at WPI, giving public safety talks and presenting risk management sessions to students.

What he didn’t expect was to land a role that officers don’t normally play—advisor to a college fraternity. 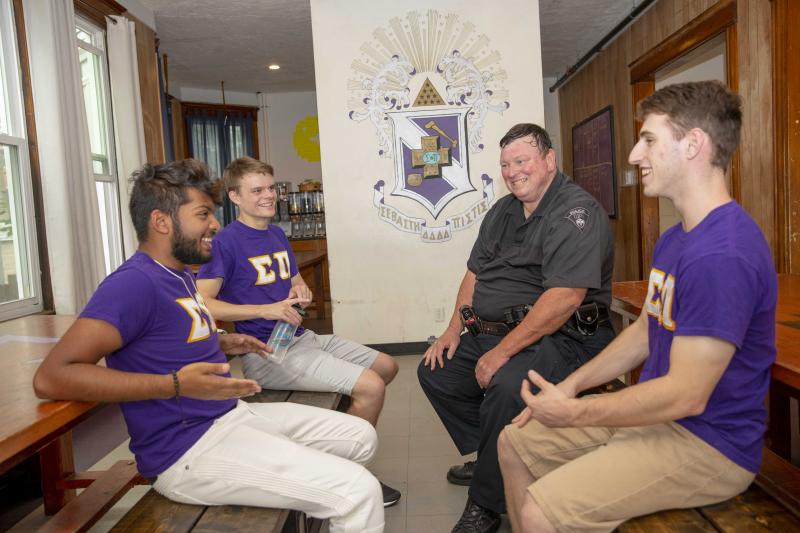 Officer Vandal has served as Sigma Pi's advisor
for the past 14 years.

For the past 14 years, Vandal has served as the advisor to WPI fraternity Sigma Pi. Recently, he received the Dr. Robert L. Burns Award, a biennial award given to a fraternity advisor who increases and supports scholarship and/or enhances university relations, and who has a close relationship with his campus chapter. Recipients are chosen based on nominations submitted by participating fraternity chapters. Vandal, who was selected from among 100 nominees, received the award during the Sigma Pi Convocation ceremony at Niagara Falls earlier this summer.

For Vandal, it’s been a whirlwind.

“I always wonder, am I doing this right?” he says. “After receiving this award, I think I must be doing something right.”

Vandal’s relationship with WPI’s fraternities started in 2003, when he acted as a liaison for campus Greek Life, giving safety talks and risk management training to every campus chapter. One night in 2004, two members of Sigma Pi approached him.

“They needed someone to name as a placeholder advisor until they found a permanent one,” Vandal said. “I didn’t know if this was something a police officer could even do. I checked with Chief (Cheryl) Martunas and with the fraternities to see if there was a template officers had to follow in order to serve as an advisor. We didn’t find anything that said I couldn’t do it. So, I agreed to try it for a year.”

Then, that year grew into five years. In 2013, Vandal became a full-fledged brother of Sigma Pi, after going through the same list of checks and balances to make sure this was possible for an officer.

“Chief Martunas knew I wanted to do this, and the dean of students signed off on it,” Vandal said. “They gave their blessing, and I became a brother.”

"The whole ride keeps getting better and better."

Receiving the Dr. Robert L. Burns Award and visiting Niagara Falls was a highlight of his career, and Vandal says he plans to keep advising Sigma Pi until he retires.

“There are other things to accomplish,” he says. “I always look for walls. Once the walls overcome their usefulness, it’s time to knock them down.”

The most rewarding part of this job, he says, is being able to nurture a positive relationship with WPI students, especially one between an officer and fraternity members.

“It’s a magical place, to be at WPI,” Vandal says. “To think, I’ve been an officer for forty years and there are kids on campus who are forty years younger than me; they get to see the relationship students have with WPI police officers. It’s heartwarming.”

This article is part of the Daily Herd's Community Spotlight series, highlighting different members of the WPI community and their invaluable work across campus. To nominate a staff member for this series, email dailyherd@wpi.edu.