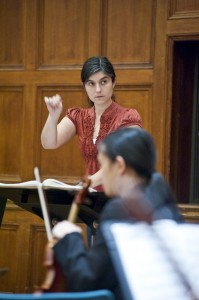 As an undergrad at WPI, Samantha McGill was an active student and music filled her calendar of extracurricular activities. She played flute and piccolo in the Concert Band, Symphony, and Pit Orchestras, and was the head drum major in the WPI Pep Band.

Fortunately for her and all concerned, McGill’s involvement with music at WPI has continued long after graduation. Today, she is the assistant director of the Concert Band.

McGill, or “Sam,” as she is more commonly called in the rehearsal rooms at Alden Hall, took time out from her busy schedule to recall her path in becoming the A.D. She has been involved with the WPI music department for nearly a decade.

“I completed my sufficiency in music by researching and documenting the instrumental history of WPI [which dates back to the school’s founding],” she says. “I began to pursue a minor in music as well, with a focus on conducting.”

McGill graduated from WPI in 2009 with a degree in management engineering, with a biomedical engineering concentration and a minor in music.

It was during the end of her sophomore year, that the director, Professor Douglas Weeks, designated McGill as the student conductor to the Concert Band.

“Sam is a wonderful, naturally gifted conductor with whom I am fortunate to be able to work,” he says. “As the music program has grown [90 in the Concert Band and 80 in the Orchestra], the additional assistance has been invaluable, not just with the actual conducting, but in the planning, rehearsing, and execution of programs.”

“As a student she studied conducting and picked up the skills very quickly, truly a natural,” he says. “She can easily read and interpret a score. Not only that, and what has always impressed me, she has complete control of a large ensemble. Without that control, no matter how skilled the musician, it would not be possible to convey the musical concepts to the ensemble and shape them into musical entities. She has consistently grown as a musician and has repeatedly demonstrated her skill at conducting very demanding and complex works.”

In her professional life, McGill is the senior business and technology analyst at the College of the Holy Cross in the Alumni Relations Department. This past summer, she was offered the position as adjunct instructor, assistant director of the Concert Band by WPI. “Which is extremely exciting,” she adds, “I have dealt with programming, music acquisitions, lessons, sectionals, running rehearsals, and working with the students.”

In her capacity as A.D. McGill says she sees her role as “one of teacher, conductor, and coach. As a conductor, I want to bring the best out of the group as I possibly can. The coach aspect comes in as we practice all the time and we work on technique and we try to bring our students to that next level.”

Student and Concert Band member, Emily Cambrola says, “Sam McGill is an awesome conductor and I admire what she does. I love how she brings lots of fresh new ideas to the table and I am enjoying working with her. I am so proud to call her one of my directors for the Symphonic Association and I look forward to working with her more in the future.”

For the upcoming Parents Day concert, Saturday, Nov. 9, at 4 p.m., McGill will be conducting the WPI Concert Band in performances of the Overture to Candide by Leonard Bernstein, and River of Life by Steven Reineke.