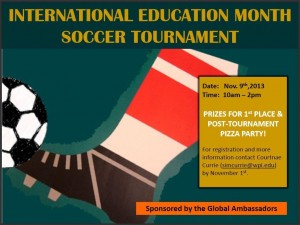 In recognition of International Education Month, WPI’s Global Projects Program (GPP) will sponsor a soccer tournament Saturday, Nov. 9, from 10 am to 2 pm on the parking garage fields.

Eight teams are participating in the single-elimination competition. The championship game is expected to get under way at approximately 12:30 pm.
The tournament grew out of informal soccer games that had been coordinated with previous International Education Month observances, explains Erin Koontz, assistant director of GPP. “Pick-up games have been organized in years past during International Education Month. The GPP wanted to get involved in a bigger way this year and decided to take this event on to boost visibility and up the ante for the tournament.”

Teams will be competing for prizes and, win or lose, will be invited to a post-tournament pizza party.
Koontz calls this the kickoff of what will be an annual event organized and hosted by GPP. Registration for participating teams closed Wednesday, but Koontz says the tournament will be fun to watch and encourages the WPI community to come out and enjoy the competition.

Soccer is just one part of the celebration, notes Koontz. The month-long observation began November 4 with an “unveiling of the flags” in the Campus Center and will conclude December 3 with an Indonesian midnight breakfast. A variety of additional events―including educational, sporting, food, and entertainment programs―will also take place. A full listing of events can be found here. [http://wp.wpi.edu/international/files/2013/11/Poster-of-Events-13.jpg]