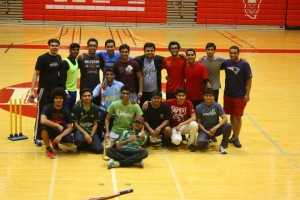 • When Muyeed Hoque, former president of WPI’s Cricket Club, tries to describe the intricacies of the sport, he sums it up quickly. “It’s like baseball,” he says, “but with a thousand more rules.”

The complicated and extensive rules only add to the allure of this technical game, says the senior industrial engineering and management and information systems double major, and makes it a great match for WPI. “It’s a complicated game,” Hoque says. “And it’s a smart game. You have to think a lot.”

Although not well known in this country, cricket, Hoque says, is the game he grew up playing as a child in Bangladesh. A premiere sport in many southeast Asian countries like India and Pakistan, but also in England, Australia, and South Africa, WPI’s cricket players enjoy playing against each other every week during the school year. “It’s more or less like baseball,” says Ehtisham Abid, the current club president. “But there are lots of techniques you can use, even with the bat. Cricket has more excitement.”

The Cricket Club has been a WPI staple for at least a decade, says Abid. With nearly 60 total members (all male), the club is gearing up to be bigger and more competitive come fall. Last year the club joined the intercollegiate American College Cricket league, says Abid, which will allow them to play in official matches against other college and university teams.

For years, standing Saturday night matches were held between student teams, which culminated in a popular and anticipated D-Term tournament. Although the players liked the friendly, but intense, competition of fellow WPI students, playing against other schools will help get WPI’s name out as serious cricket competitors. Because the team practices indoors and doesn’t have regulation-level pads and equipment, they implement certain restrictions for safety purposes (like playing with a taped up tennis ball instead of the extremely hard cricket ball used in matches).

“We have a pretty good team,” says Abid. “All the people from other countries have played before coming to WPI.” As the new president, Abid has several goals in mind to move the club into the forefront. He wants the club to get an official WPI faculty advisor and to become eligible for funding from the SGA. Another way to introduce students to cricket’s charms, he says, is to offer it as a PE credit like many other clubs are able to do.

Cricket newbies do have some adjustments to make. “A proper cricket game lasts nine hours,” says Hoque. But with the recent introduction of a shorter form game that lasts about four hours, more people are watching the game. Purists, who even play days-long games, don’t always like the short form as they say much of the technique is lost in a shorter game, but cricket novices, whether in the audience or on the court, like the faster game.

Both Abid and Hoque miss the excitement of cricket tournaments back home—especially during the recent Cricket World Cup—and like the familiarity of playing the game. “Life here is so different from back home,” says Hoque. “It’s nice to have that here.”

When students return to campus after the summer, they can join in on the practice sessions to learn. Teams will then be picked for the experienced matches.

“We are really trying to improve all that and to take WPI to different schools,” says Abid. “We have decent players who can make a mark.”

For more information, check out the Cricket Club’s Facebook page.