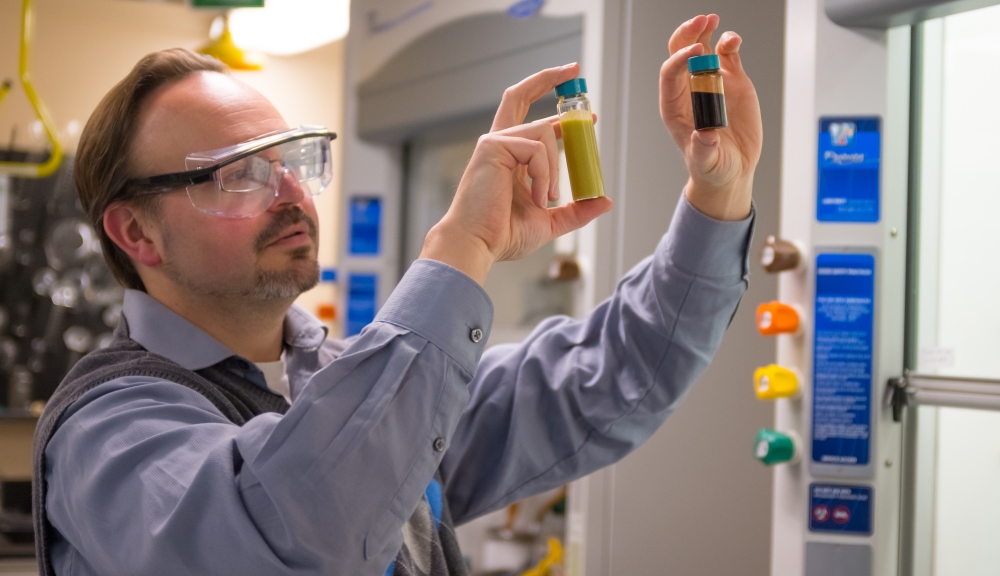 In a paper in the journal Energies, chemical engineers at WPI describe a method for improving a process that transforms waste food into biofuel, helping tackle three global problems: billions of tons of wasted food, our continuing dependence on petroleum, and water waste

Funded by a U.S. Department of Energy grant, a team of researchers at Worcester Polytechnic Institute (WPI) is creating a better way to convert waste food into biofuels that are environmentally friendly, a project that would have an impact on global problems like crude oil dependence, food waste, and water pollution.

Using food waste to create biofuels is not new, but processes developed thus far, which are cumbersome and expensive, have not caught on. In a paper published in the open-access journal Energies, Michael Timko, associate professor of chemical engineering, reports on work by a team of colleagues to significantly improve the yield of oil from the waste food conversion process while also improving efficiencies.

“People have been working for decades to make fuels that compete with petroleum,” Timko said. “We’re looking to reduce our reliance on crude oil, a depleting resource that contributes to climate change. If we can do that using something that would otherwise continue filing our municipal landfills, that’s two ways we’d be benefitting our environment. This probably isn’t enough to make the process economically feasible yet, but it’s a step in the right direction.”

Timko said his process described in the new paper, which was funded by a one-year, $168,373 SBIR grant from the U.S. Department of Energy, could become an economical way to transform food that has spoiled or is being otherwise discarded into biofuel to power schools, restaurants, grocery stores, and even entire communities. He said he envisions reactors that would permit businesses and institutions that sell or serve food to process their waste to generate a liquid fuel they could use to generate power, saving money and helping the environment. And, he said, by keeping waste food out of landfills, where it decomposes to produce greenhouse gases and water pollution, the process will have significant environmental benefits.

About a third of all food produced for human consumption is lost or wasted—about 1.3 billion tons per year, or a loss of approximately $161 billion, according to the Food and Agriculture Organization of the United Nations. Thirty million tons is wasted each year in the U.S. alone.

Scientists have known for decades how to make liquid and gaseous fuels from waste food, using various processes and with varying success. A newer process, hydrothermal liquefaction, is a promising alternative, but the others, has drawbacks. Through this process, wet biomass (like waste food) is placed in a pressure cooker–like reactor and exposed to high temperatures and pressures. Under these conditions, hydrocarbons in the biomass break down to produce a biofuel similar to crude oil.

The problem is that a significant fraction of the organic compounds produced, including acids and alcohols, end up in the water phase produced by the reaction and are not converted to biofuel. The waste water can be processed further to produce more usable oil or treated to make it clean enough to discharge, but either option adds considerable cost and uses additional energy.

“Our challenge is making a fuel that is economical when compared to petroleum-based fuels,” Timko said. “In fact, our biofuel has to be cheaper than oil because that industry has 80 to 100 years of momentum and a massive infrastructure behind it.”

Timko and his team decided to add catalysts to the liquefaction reaction to see if they could reduce the amount of carbon compounds lost to the water phase and increase the yield of oil, thus making the process more efficient and economical. They experimented with two types of compounds: sodium carbonate (Na2Co3), a homogeneous catalyst, and a group of heterogeneous catalyst known as cerium-zirconium mixed oxides (CeZrOx).

In ongoing research, the team is investigating other potential catalysts, including red mud—a waste created during the production of aluminum, which is inexpensive, stable, and reliable.

Alex Maag, a WPI graduate student in chemical engineering, coordinated the lab experiments for the project and oversaw the contributions of a Major Qualifying Project (MQP) team: senior chemical engineering majors Maria Bailey, Jeremy Hemingway, and Nick Carabillo. (The MQP is a professional-level design or research experience that all WPI undergraduates must complete.) Maag is a co-author on the Energies paper, along with Timko, Geoffrey Tompsett, assistant research professor of chemical engineering, and Alex Paulsen, Ted Amundsen, and Paul Yelvington of Mainstream Engineering Corporation in Rockledge, Fla.

“By using something that otherwise would go in our landfills,” said Maag, “contributing to the production of methane, a greenhouse gas, as well as water pollution and erosion, we’ll be able to reduce our reliance on crude oil, a diminishing resource that contributes to climate change. We’re solving two issues at once.”