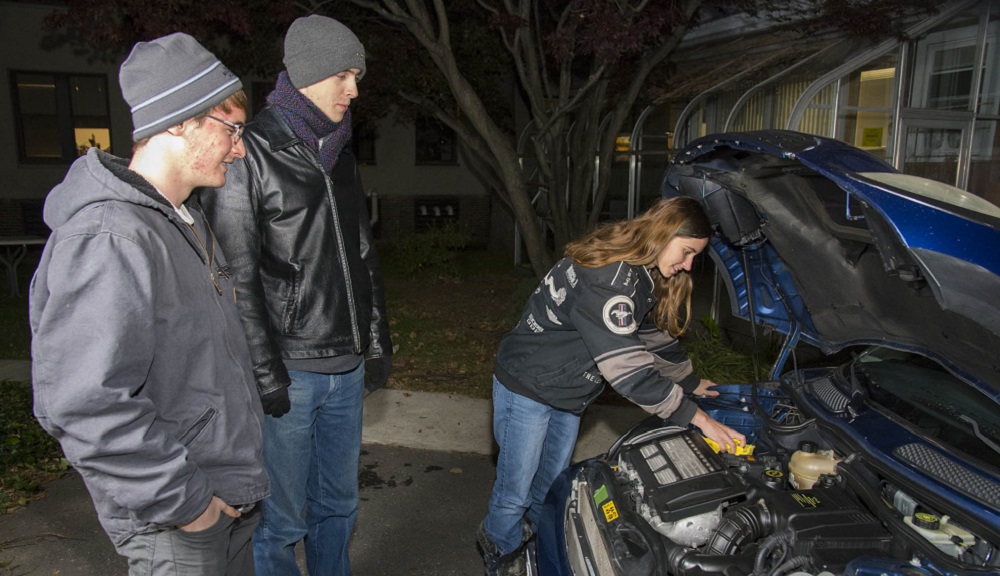 Are you interested in go-karts, drifting, rallying—or even all three?

Want to find people who will appreciate all the care and detail you’ve put into restoring your 1967 Chevy Impala?

Great—they are ready and more than willing to admire your handiwork with you.

They are the students in WPI’s Motorsports Club. Ladies and gentlemen, start your engines!

From repairing and upgrading vehicles to learning more about the inner workings of engines or suspensions, all with like-minded people sharing the same passions, the Motorsports Club is the place to be for WPI students who are interested in any form of motorsports. The club maintains a garage that is used by members for personal vehicle projects and maintenance; it also serves as home base.

“We’ve got a wide spread of members with different interests and types of vehicles,” says club president Alex Hard ’19. He’s been part of the club since he stumbled upon it at the Activities Fair in his first year; he was soon elected vice-president, and is now in his second year as president. “It’s great to see how the club has grown.”

And grown it has: every year the club hosts a variety of events, seminars, and activities for its members as well as other car enthusiasts—from go-karting trips and seminars on the inner workings of cars to a car show (to be held in D-term) and Dyno Day.

While it might sound like something inspired by Jurassic Park, the Dyno Day annual event is Hard’s favorite memory as a club member. The club partners with a local performance shop that has a dynamometer (a device that measures the power of a car), and sees how the members’ respective vehicles stack up against each other.

“You’re able to bring personal vehicles—from sports cars to minivans—and see how much power they make, as well as see the difference from any modifications the member had made in the past year,” he explains.

There are several different kinds of motorsports, but for Hard, narrowing down his favorite is easy: rallying, where modified street cars race on dirt roads through the woods with only paper notes to guide them. “It’s very exciting to watch, he says.”

Interested in what the world of motorsports has to offer, but don’t know the difference between a catalytic converter and a spark plug?

Doesn’t matter—the Motorsports Club prides itself on being a welcoming environment for anyone interested in cars, no matter their level of expertise. Students who’d like to learn more and stop by the garage themselves may email the club for more information.

This is the fourth of the "WPI's Got What?" series, highlighting the variety of clubs and organizations at WPI. Check out other clubs that have been profiled as part of the series: