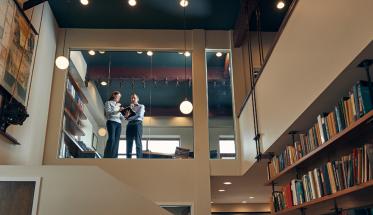 It took Nick Tsapatsaris ’86 (CE), ’87 (MS SE), 15 years, two master’s degrees, and a professional license to achieve his career goal of designing and constructing buildings. So when he learned that WPI’s Architectural Engineering program would have gotten him there faster, he was eager to throw his support behind it.

He and his wife, Stacey, have committed $50,000 to endow the Nicholas and Stacey Tsapatsaris Architectural Engineering Fund. The fund will enable the university to better develop innovative programs, more competitively attract motivated students, and successfully seek and retain a world-class architectural engineering faculty.

Nick is also a member of WPI’s Architectural Engineering Advisory Board and the Engineering Dean’s Council. 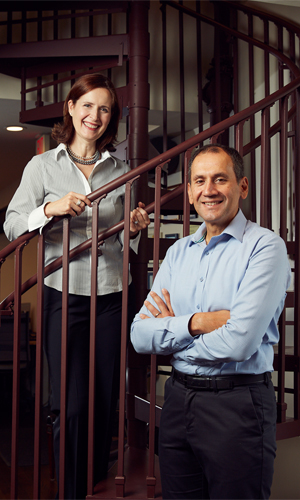 “The spot where I am in life right now is exactly where this particular program would have taken me to in 1986,” he says. “Perhaps that education then would have saved me a decade’s worth of additional education.”

WPI created its architectural engineering program in 2012. It’s the only one of its kind in New England and one of only 20 in the country. Nick says it equips students to become the field’s “decathletes,” proficient in every aspect of building and design.

“The future of what we do is to be a decathlete of the process," he says, "to be knowledgeable about a variety of different things that happen when you build a building.”

Their own firm, Tsapatsaris & Associates in Ridgewood, N.J., handles all phases of a building’s lifecycle. Nick leads the architecture, engineering, construction, and development, while Stacey fulfills the crucial role of marketing, leasing, and asset management. Last year their firm won a New Jersey Smart Growth Award for its adaptive reuse of the century-old Guenther Mill building in the town of Dover.

Nick’s interest in building and design began in Greece, where he grew up. He came to the United States to attend WPI, which promised a route to his professional goals. “My dream program at the time was at WPI," he says, "but had there been the architectural degree program, it would have been a super dream.”

He majored in civil engineering, then stayed on to earn a master’s in structural engineering. He received a second master’s, this time in real estate development, from MIT. Roughly 15 years after leaving WPI, he became a licensed architect.

Nick lost touch with his alma mater during the years he spent building his firm, raising three daughters with Stacey, and competing in Iron Man competitions (he may be a decathlete professionally, but he’s a triathlete on the race course). Then, a few years ago, he met President Laurie Leshin at an alumni event in New York City. Her long-term vision for WPI resonated with him, he says. When he learned about the university’s architectural engineering program, he knew he wanted to become involved.

“That’s what reengaged me,” he says. The firm has since hired WPI graduates, who bring more than technical proficiency to the job. “They also understand why they’re doing it in the broader context of society. That’s important.”

Their own office in the 105-year-old theatre he refurbished serves as both an exhibit of his work and a metaphor for his approach. It’s in the former fly loft­—the space above the stage where the crew would operate the curtain, scenery, lights, and equipment. The office is sleek and modern, but the Tsapatsarises preserved the iron beams, pulleys, and cables as a reminder of the various and often hidden functions that go into any successful project.

“If I had to show an aspiring student what I do, my office is a pretty good example,” he says.  “The architectural engineering program is what would train somebody for something like this.”