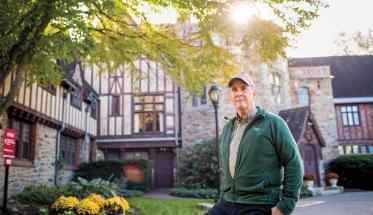 MIKE ABRAMS ’77 strikes one as a person who believes in possibilities. It’s one of the reasons he ended up at WPI.

Abrams had dreamed of a career in science or engineering since childhood. His parents said he could go to college wherever he could get enough funding to supplement family finances to attend. But he wanted something with more possibilities—more potential. Someplace where he could choose his own path.

“The WPI Plan was why I chose to go to WPI, and it did not disappoint,” he says. “You learned how to learn, and you weren’t intimidated by things you didn’t know.”

When the mathematical sciences major wasn’t in class, studying, or with friends, he was working to help pay for his education, which was partly funded by his parents and partly by scholarships. The rest he financed with part-time jobs during the school year and full-time summer employment.

After graduating from WPI (with high distinction) and marrying Nancy, his high-school sweetheart, Abrams continued to follow the threads of possibility. Never afraid to try something new and see where it might lead, he began his career with a brief stint in sewing machine repair and eventually found his way to becoming an electrical engineer in the oil and gas instrumentation industry. Along the way, he earned an associate’s degree in electronics engineering and then a master’s degree in electrical engineering. Before retiring, he had become an independent consultant in the oil and gas industry.

Through all that time—even living far from the Hill—Abrams carried a fondness for WPI and for Worcester. “The university became a part of me,” he says.

He has stayed connected to WPI over the years by attending his class reunions and volunteering for the university in various capacities. He served on the Alumni Association Board of Directors from 2011 to 2015, and then as treasurer of the Association for two years.

Abrams has also given back financially, donating almost every year since graduation; he and Nancy are members of the President’s Circle, WPI’s leadership annual donors.

“I couldn’t have come to WPI without scholarships and loans,” he recalls. “I know it has influenced my giving to WPI over the years.”

Recently, when traveling back to campus for meetings and other activities, Abrams noticed a lack of space for alumni to work, meet colleagues, and generally organize their day while visiting the campus. He also recalled the less-than-optimal video conferencing for the Alumni Association Board meetings. He noticed, and wanted to do something about it. He saw great possibilities in Higgins House.

“What better place for an Alumni Center, and what a great thing for WPI to have,” says Abrams.

Mike and Nancy recently made a commitment to renovate and update this iconic WPI building into the Alumni Center at Higgins House, which was celebrated during Alumni Weekend. Now upon entering through the ornately carved wooden doors, alumni will find easy access to a campus phone and a display of the day’s campus events, among other resources. The traditional library has been brought into the 21st century as a virtual meeting room with a focus on remote conferencing, making it ideal for Alumni Association Board of Directors meetings.

Thanks to a gift from the Alumni Association that was inspired by the Abrams’ support, the conference room upstairs has been converted into an Alumni Lounge, featuring ample seating and work spaces, easy Wi-Fi access, plenty of outlets for using and charging digital devices, and books written about WPI and by WPI faculty and staff. The renovation also includes refurbishing the Great Hall, which is used throughout the year for such alumni events as Tech Old Timers, Alumni Weekend, and Homecoming, as well as many other campus events.

For the university, the overall aim of the project is to improve the alumni experience on campus, and honor the value placed upon the alumni relationship. For Abrams, the renovation goes beyond just a new look.

“It will be a home, a place to be comfortable on campus,” he says. “It will be beneficial to everyone.” 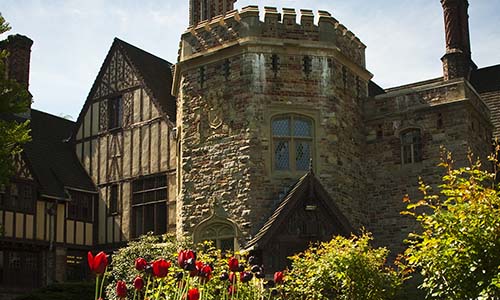 From hidden doors to early Renaissance song lyrics, there's more than meets the eye at Higgins House. Go behind the scenes in the Daily Herd.