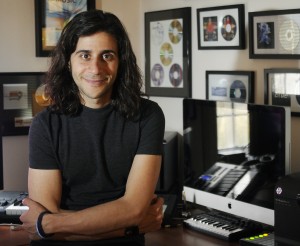 Manzo, along with his brother Dan, a prospective WPI graduate student, recently filed a patent for a music education video game they are creating with a working title of “Before Heaven.” The interactive, 3-D role-playing game teaches users musical concepts such as scales, chords, composition, and performance in an informal manner. It’s a “natural evolution,” of Manzo’s work using music technology with a number of groups—including individuals with special needs and disabilities as well as people with no musical backgrounds.

“Instead of using apps and controls, I thought, why not design a virtual reality game that lets the user go around and learn about musical things?” he recalls of how the project began.

V.J. says that he and Dan tinkered with story ideas, and came up with a plot for the game that involves characters taking part in a musical tournament. As the main character travels around competitively, he learns about being a musician. The game is strictly G-rated without violence, profane language, or “smashing of guitars,” he laughs.

“Side quests in the game will feature social media components, which will be appealing to a younger crowd,” Manzo says. “Users will form their own bands and be able to tell others where they can go to check out where they are playing at venues inside the game. This will allow a lot of people who don’t have musical skills to have something to call their own.”

Students have already embraced the project, according to the brothers. V.J., who began teaching at WPI in 2012, made it possible, but not mandatory, for students to focus on a game environment in his practicum course in music technology. Others have chosen to participate for their IQP or independent study projects. 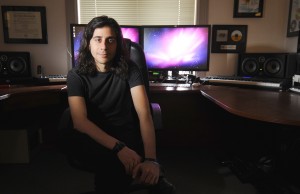 The option was met with total enthusiasm from students, with all of them choosing to enter the gaming realm. “I’ve had some kids come by after class because they want to talk more about it,” he says. “They ask about how it can influence culture or learning styles. We’ve had so many conversations.”

Dan sat in on a class as a guest and says he got to see activity at a high level. He is impressed by the fact that students bring their particular skills—whether 3-D modeling, computer programming, writing, music—to the table.

“The focus is on how interactive music can be expressed, says Dan. “I think including all kids in the process is beneficial because it makes them feel part of something. Their own success comes in just working on it.

“WPI has been more than helpful and great,” he adds, noting that he hopes to become a graduate student in interactive media game development in spring 2014.

V.J. describes himself growing up as a nerd who took up guitar at age 12 and loved older rock and roll music while his peers enjoyed rap.

Dan took up the drums at age 5 and has also played in bands and enjoys incorporating synchronized lights and video into band settings. He received his bachelor’s degree at New Jersey Institute of Technology in information technology/applications science.

The brothers point out that their strengths complement each other through the creative process—V.J. is more of a music expert with technology skills and Dan more the technical wizard with musical abilities. Likewise, WPI students with a wide range of interests are each bringing unique talents to a larger whole.

Although the next step is to have a prototype in place by December, the brothers are not prepared to rush the project and prefer to let it evolve until it is ready.

“This [project] is a way to bring the arts, technology, and education all together for a real purpose,” Manzo says. “It’s more than an activity to show off creativity. People can write a piece of music using this mechanism of technology; it’s an artistic gesture that remains forever.”