WPI’s newest residence, Faraday Hall, which opened in August 2013, was recognized by a state building construction association last week for its accelerated design and construction, LEED certification, safety record, and reuse of brownfields. AGC of Massachusetts awarded Faraday a Merit Award during a gala at the Intercontinental Hotel in Boston on Oct. 8. 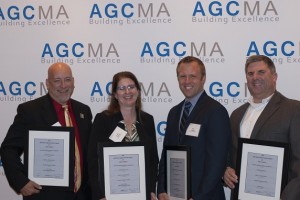 Accepting the award on behalf of WPI was Fred DiMauro, assistant vice president for facilities, along with Brett Lambert of ADD Inc., the primary designer; Elizabeth Brosnan of Daniel O’Connell’s Sons, contractor; and Jeffrey Lussier of KV Associates, who acted as owner’s representative.

Regarding the award, DiMauro says, “It was indeed quite an accomplishment; very fast-paced, but not sacrificing quality, sustainability, or creativity. We ended up with a quality building, on time and on budget; an exciting residence hall inside and out for WPI’s student body in a growing neighborhood at Gateway Park.”

The $38 million, 89,000-square-foot Faraday Street residence hall is situated between Grove and Lancaster streets, on the site of an old manufacturing building that was demolished several years ago. The new building, which houses 258, features air-conditioning, tech suites, a game room, and full wireless access. Faraday Hall’s design celebrates the work of Michael Faraday, a 19th Century British scientist, chemist, physicist, and philosopher. 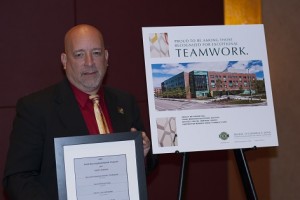 AGC of Massachusetts is a professional construction association representing firms that provide building construction services for commercial and institutional clients in the Commonwealth. Begun in 1935, the Association offers valuable management education, safety training, and advocacy for its members and the industry at large.

During the awards presentation, Peter Kuttner, president of Cambridge Seven Associates, acting as emcee, read the competition’s jury remarks on the Faraday construction project: “It’s a great quality of work, due to intense collaboration. It allowed the team to overcome several obstacles and challenges, not the least of which was an unbelievable schedule.”

Faraday Hall was conceived, designed, permitted, built, and ready for occupancy in 16 months, despite two early snowstorms and Hurricane Sandy. 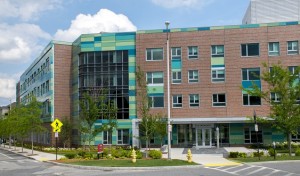 With Faraday’s student residents, the total living in WPI residence halls and school-run apartments is now just over 2,000 undergraduates.