WPI graduates continue to see a consistent, significant return on their educational investment, according to a recent outcomes report from the Career Development Center (CDC).

Class of 2015 graduates—bachelor’s and advanced degrees combined—have experienced a 91.7 percent success rate since receiving their diplomas. These graduates are employed, entering graduate school, serving in the military, or participating in a volunteer service program.

“The overall results this year are remarkable, and similar to recent years,” says CDC executive director Steve Koppi. “I think it’s a sign of the kind of education students get at WPI, the result of the hard work of the CDC, the result of students really taking risks and being savvy job seekers.”

Koppi stresses the particular significance and accuracy of the report because the numbers are based on a high “knowledge rate”—that is, WPI has been able to determine the whereabouts and status of 85 percent of the 2015 graduating class, or 1,420 out of 1,671 graduates.

Also of note this year is an increase in the average starting salary for WPI bachelor’s degree graduates—that grew by nearly 7 percent over 2014 to $66,805 in 2015.

Koppi credits this in part to recent targeted efforts by the CDC to enhance students’ job-seeking skills. The center recently began offering workshops on job offer negotiation, and also became a “Start Smart” campus, which is an initiative of the American Association of University Women to close the gender pay gap.

Some degree programs, such as environmental engineering, and bioinformatics and computational biology, saw success rates of 100 percent for their 2015 graduates. 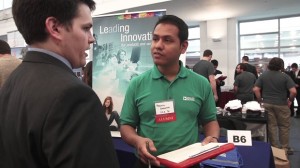 The report is based on a variety of sources, including surveys of students and graduates, as well as feedback from faculty and staff, phone campaigns, and research via social media.

Other degree programs with smaller numbers of students—environmental engineering, for example, or bioinformatics and computational biology—saw success rates of 100 percent for their 2015 graduates.

WPI graduates are employed at more than 500 local and national companies, and/or are advancing their education at more than 50 universities around the world.

“WPI is very highly ranked in terms of return on investment,” says Koppi, also pointing to the college’s top-20 ranking in the 2015 Princeton Review for both “Best Career Placement” and “Top Internship Opportunities.”

The information in the outcomes report—which WPI has been conducting since at least 1956, based on archived records, according to Koppi—ultimately provides myriad benefits for students, the college at large, and employers.

“It’s extremely helpful for current students to know what employers are hiring, what average salaries are,” he says. “It’s just really valuable information for their career planning and negotiations.”

Meanwhile, it helps employers to benchmark—and tweak, if necessary—their recruitment activities, and assists the CDC with shaping and shifting its employer outreach strategy.

Ultimately, though, Koppi credits the hard work of alumni in their own success. “We’re really proud of the students,” he says. “This reflects their drive and their achievements.”