Not even thunder and lightning could stop a well-loved WPI tradition for welcoming new students from taking place last Wednesday night. In fact, this year’s event saw one of the largest turnouts ever, as faculty got in on the action for the first time.

For the past several decades, WPI has marked the end of New Student Orientation with the crossing of Earle Bridge, a tradition in which first year students walk from Alden Hall to Boynton Hall. The crossing symbolizes the new students’ entry into the WPI community and is remembered four years later, when graduating seniors cross the bridge again from Boynton toward the Quad to receive their diplomas.

Previously, faculty have only participated at Commencement, lining the bridge as the students march to receive their diplomas. “The bridge crossing is always a highlight of Commencement for the faculty,” said Art Heinricher. “When they heard about the crossing at NSO, many wanted to expand the tradition and line the bridge to welcome the first years.”

“We always hear students talking about how wonderful this event is, so it’s nice that faculty can now be part of it.” —Professor John Sullivan

About two dozen faculty members showed up for Wednesday’s event, many dressed in their own caps and gowns despite intermittent rainfall. They noted that they were there to support new students, and to check out a popular event that they had only ever heard about before.

“At graduation, we see the students cross the bridge to start the next phase of their lives—it’s just as special to see them start their chapter here at WPI,” said associate professor of electrical and computer engineering Alex Wyglinski.

ME professor John Sullivan added, “We always hear students talking about how wonderful this event is, so it’s nice that faculty can now be part of it—I think it’s great to make old traditions new.”

President Leshin led the pack of hundreds of students across the bridge. The crossing marked her first year at WPI as well, and she paused to take a selfie with the growing crowd of students. Though lightning continued to flash in the distance, the rain held off as the enthusiastic group began their way across the bridge. Any sounds of thunder were soon drowned out by cheers and chants from faculty and student members of the Student Alumni Association, who helped organize the event. 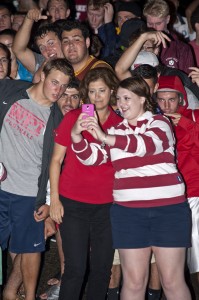 After she crossed, Leshin was given a WPI beanie and she joined the faculty members lined up on the bridge who were giving high fives to students. It took nearly half an hour for all of the students to cross—at which point the rain began to fall again.

In spite of the weather, the atmosphere was cheerful and energetic as the students headed for the Rubin Campus Center for an ice cream social. They were excited about getting to high five the president and faculty members, but they also recognized the significance of the event.

“It really makes me feel that is the start of something new, and I’m definitely looking forward to my future at WPI,” said Andrea Karduss ’18.

“I don’t know exactly what I’ll be doing four years from now,” said Camila DiFino ’18. “The next time I cross that bridge I’ll be at a completely different place in my life—it’ll be a whole new story.”