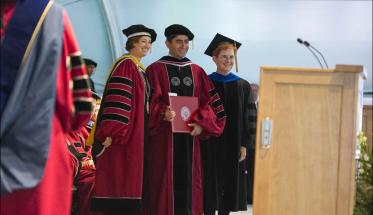 With a flourish of ritual and an almost palpable energy, nearly 800 master’s degree and PhD candidates received their diplomas in the first ceremony of WPI’s 149th commencement exercises. After years of challenging work, overcoming obstacles, and persevering through research that didn’t always go as planned, the graduates took time to reflect on all they accomplished and bask in the support of the WPI community.

Neil Heffernan, computer science professor and director of the Learning Sciences and Technologies program, who was named recipient of the 2017 Trustees’ Award for Outstanding Research and Creative Scholarship, served as the Honorary Marshal for Graduate Students, leading the processional of graduates and faculty from its starting point at the Earle Bridge. 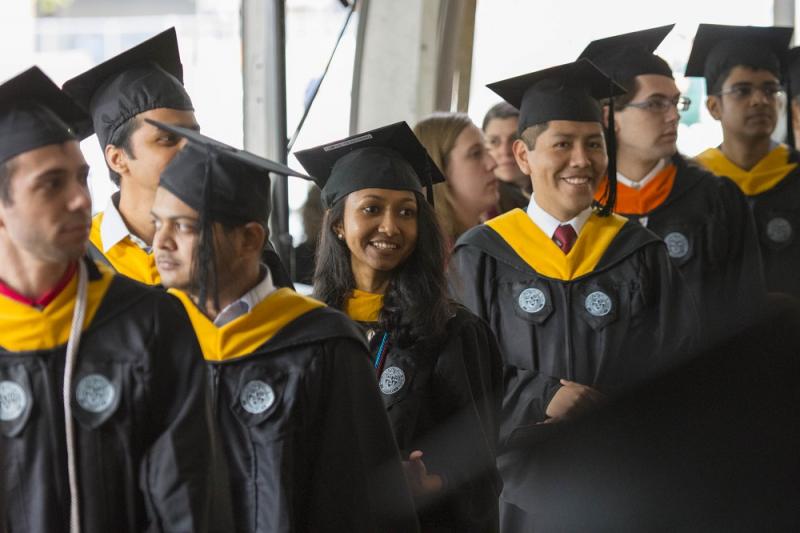 Graduates wait to receive their diplomas.

As the processional finished the traditional path through campus and across Earle Bridge, graduates took a left turn at the statue of Gompei, reaching up to give the bronze goat a pat on the rear before being seated in the tent on the Quad to hear welcoming remarks by WPI Board of Trustees Chairman Jack Mollen.

As President Laurie Leshin noted in her opening remarks, these graduate students are being honored with a fairly new tradition—their own commencement exercises. This year marks only the second time the graduate and undergraduate ceremonies have been distinct, which was implemented to reflect the growing stature of WPI’s graduate programs. The sheer numbers of graduates reflect the increasing popularity of the on-campus and online programs. This ceremony conferred 747 master’s degrees and a record-setting 46 doctoral degrees.

Two honorary doctorates were presented at the ceremony. Commencement keynote speaker Deborah Wince-Smith, president and CEO of the U.S. Council on Competitiveness, received a doctor of humane letters. Audrey Carlan, the first woman to receive a graduate degree from WPI, earned her master’s in physics in 1957 and returned to WPI to receive her doctor of science. 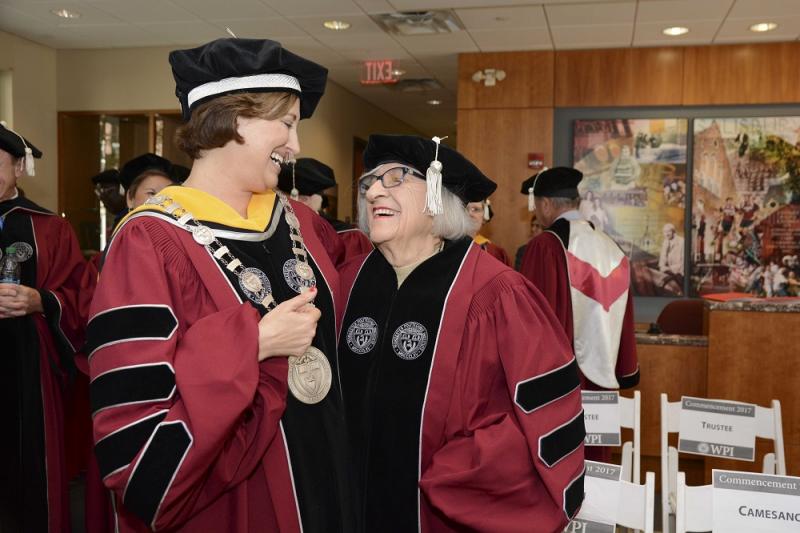 President Leshin (left) shares a laugh with Audrey Carlan,
honorary doctorate recipient and ​the first woman to
receive a graduate degree from WPI.

Carlan, who was greeted with a standing ovation, is also credited with completing the first computer science project at WPI. Her research included a project on the electromagnetic scattering properties of spheroids and she used the massive IBM 650 console. Carlan shared her recollections of being a woman at WPI 60 years ago where her professors barely blinked at her gender, and she had the opportunity to dive into the research and the learning she so loved. “The progress we have made is unimaginable, and we must not let the progress stop,” she said.

Carlan, a Brooklyn native, dedicated her speech to her late husband, Alan, whom she refers to as her “beshert,” or her soul mate, and with whom she completed the physics master’s program and shared 55 years of marriage. She chose not to walk across the stage at their 1957 graduation as she was weeks away from giving birth to the first of their three children. Her WPI experience was not without a few adjustments. “The professors didn’t care if I was not a male student,” she said. “One professor gave me a card to stick on the restrooms when it was needed. The card contained the word ‘Woman,’ and I was to knock first to make sure the coast was clear.”

The couple took WPI classes offered at the pioneering optical and eyewear company, American Optical. “In the American Optical lab, my husband Alan was working on evaporating silicon on sapphire and I was working on the IBM650 designing continuous vision lenses (now called progressive lenses).” Eventually they moved to California where Carlan still lives. In her return, Carlan says she “is happy to see the number of women who are eager to use their enthusiasm, creativity, and intelligence.” Carlan advised graduates to remain curious throughout their lifetimes. “Look at where we are today,” she said. “And the future? You are all the future. There is more to look forward to and you will be at the forefront of it all.” 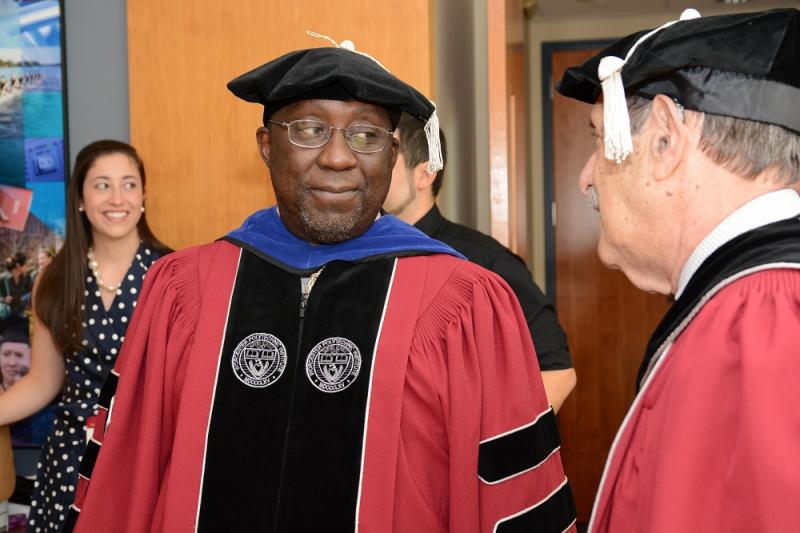 Professor and Dean of Engineering Winston Soboyejo
before the ceremony.

In her keynote remarks, Wince-Smith recalled a career that has included leadership positions in the administrations of three U.S. presidents, managing scientific exchange programs between U.S. universities and counterparts in former Eastern Bloc countries for the National Science Foundation, and sharing her expertise as a member for many corporate and nonprofit boards.

Giving praise to Worcester’s “entrepreneurs, risk takers, and disruptors,” Wince-Smith gave the graduates a quick rundown of the city’s remarkable history of innovation and of being first in everything from producing valentines to producing the first liquid-fueled rocket. Calling to mind images of “pulsating streets, crowded with thousands of workers,” Wince-Smith spoke of workers who lived in Worcester’s triple-deckers and ate at iconic dining cars on their way to jobs that fueled innovations like the monkey wrench, the envelope folding machine, and the power loom.

“The industrialists of 19th Century Worcester understood the competitive advantage of high value-added manufacturing in building a vibrant, prosperous city,” she said, noting that today’s new firms and industries can only thrive in an environment that welcomes innovation. “The story of Worcester captures the very essence of why innovation matters more than ever,” she said, noting the specialties of each of the graduates educated in technologies only imagined even 10 years ago. “You graduates now stand to be inheritors of this proud legacy.” 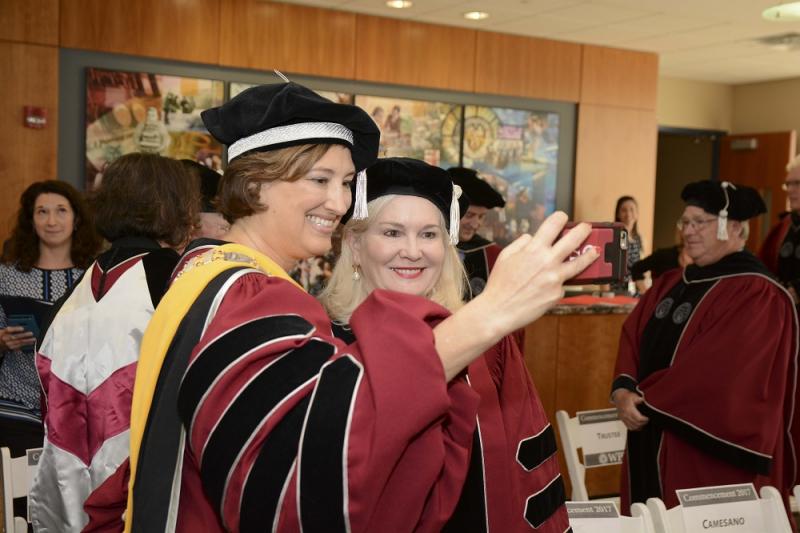 Reflecting on how the revolutions in science and technology and a veritable “data tsunami” are rewriting the rules of production and services and shaping the future, Wince-Smith said a new “age of Illumination” is being ushered in. She urged the graduates to take on the moral, ethical, and intellectual responsibilities their degrees confer. “As distinguished graduates of WPI, each and every one of you has an obligation to use your knowledge, your ingenuity, and your imagination to transform our world for the better and solve the great global challenges of our day,” she said.

President Leshin’s remarks echoed Wince-Smith’s sentiments about the thrill of science and being on the cusp of something greater than anyone imagined. “I hope you’ve all had the opportunity to experience the pure joy of discovery during your time here,” she said. “As my faculty colleagues seated on the stage here know, there’s nothing like it.”

But Leshin also cautioned the graduates of challenges to come, of times when they might stumble and even question if their decision to venture into the unknown was wise. Recalling her own research on chemical measurements in rare meteorites, Leshin said the painstaking, career-doubting work all led to one moment of unforgettable breakthrough.

“To this day, I can recall what it felt like to have my right index finger on the mouse button just before I clicked it to make the plot,” she said, remembering how her racing heart turned into elation as her data plot correlated two critical measurements. “That was a true moment of discovery,” she told the graduates. Leshin asked the graduates to stay connected to the WPI family as they ventured into the next steps of their lives. “I am struck most by the amazing potential for breaking new ground that I see here in front of me,” she told graduates. Without being able to see into the future, Leshin knew her instincts would prove correct. “In true WPI fashion, you will be groundbreakers. You will make an impact.” 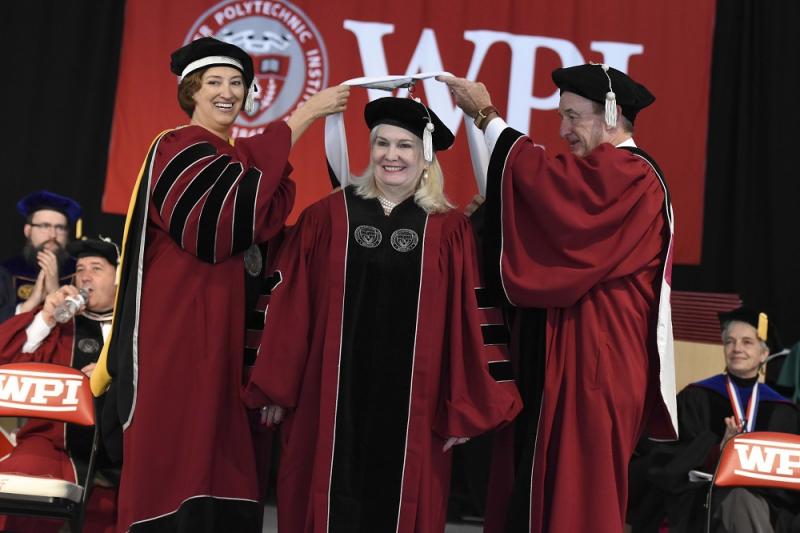 Student speaker Rodica Neamtu, who received her PhD in computer science and is a data mining researcher, has more than 15 years of higher ed teaching experience and will join the WPI faculty as an associate teaching professor. Neamtu, who came to WPI after the academic department in which she had taught for 14 years closed, told the graduates that in the face of so much change, they must persevere. “Like many of you,” she said, “I believe earning this degree is one of the hardest things I ever had to do. Like many of you, I returned to school later in life and I had to turn hardships into positive experiences.”

Neamtu thanked the advisors, faculty members, and those “who helped us turn setbacks into progress and hard work into accomplishments.” And she spurred the audience to a round of applause for the family and friends who encouraged graduates’ successes, even as these students were possibly “dealing with heartbreaking challenges, the kind that make you start all over, have to carve a new path in life, and re-invent yourself.” Overcoming the challenges, she says, is what has made each of them stronger and ready to “meet our futures tonight,” but not without first taking a well-deserved night off from tracking experiments or editing papers to savor their new membership as WPI alums. 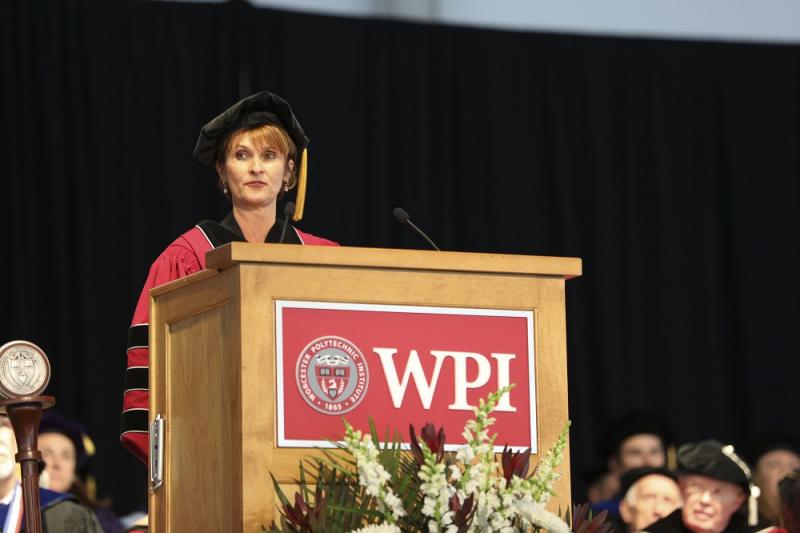 Following the ceremony, the graduates got together for photos with friends and family. Some talked about their next steps.

Mai Tomida will start a job in September in Singapore as a fire protection engineer. “I have some time off until then. I am planning to go back home to Egypt, and tour Africa, solo. That’s my plan for now,” she said.

“I did my undergrad here in chemical engineering. It was a very good experience. I had never been in the U.S. before, so this was my first time coming. It was an amazing experience. I met a lot of good people—friends, professors, mentors.”

Chandan Puttaswamy will continue his job in information technology at Vistaprint in Waltham. “I’m working almost a year now. They plan on hiring me,” he said. “It’s a pretty good job. I can pay off my fees and I was able to buy my dream car.

“It’s been amazing at WPI. The faculty here are really helpful and knowledgeable, especially in projects. We learned how to work with people of different cultures. That was a major part. Every project was helpful.”

WPI’s 2017 Undergraduate Commencement begins at 10 a.m. tomorrow on the Quad.