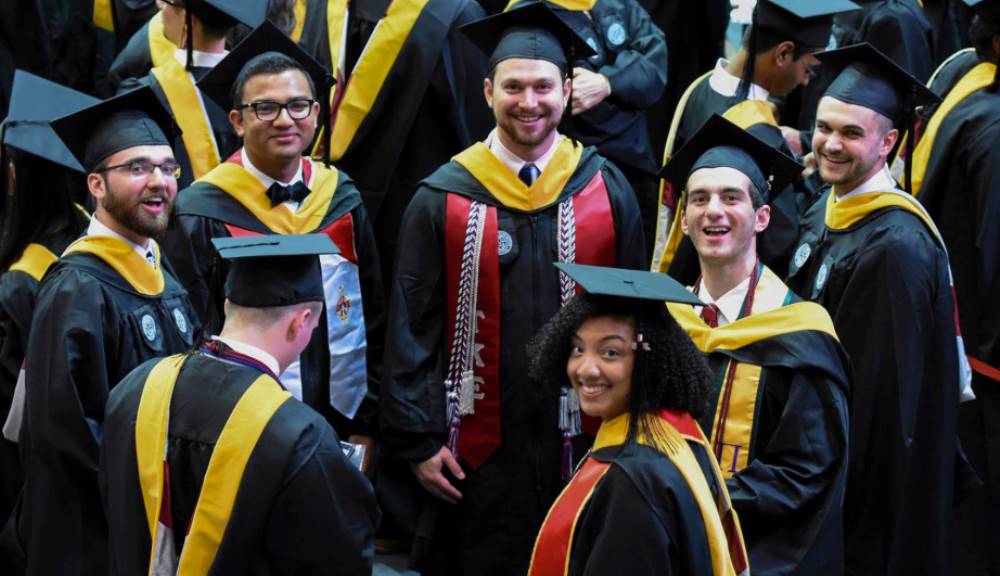 Described as a “risk-taker and glass-ceiling breaker,” McNutt is the first woman to serve as president of the NAS, a private, nonprofit institution established under a congressional charter signed by President Abraham Lincoln in 1863 that, with the National Academy of Engineering and the National Academy of Medicine, provides science, technology, and health policy advice to the federal government and other organizations. She was the first woman to serve as editor-in-chief of the journal Science since its founding in 1880.

McNutt opened her keynote address by repeating an anonymous quote: “If you can’t be a good example, then you will just have to be a horrible warning.” Her goal, she told the graduates, “is to have you learn from my mistake so you don’t have to repeat it.”

McNutt described a scenario early in her career when she was planning a major geophysical experiment in Nevada’s Lake Mead—an experiment that was four years in the making and required approval from, among other constituents, the local bass fishing community. Despite her methodical planning, her scientific acumen, and her attention to detail, McNutt failed to recognize until too late that, when speaking to the fishermen, she “sounded like everyone’s caricature of the out-of-touch nerdy scientist asking them to ‘trust me’ that my field experiments would have no adverse consequences on the bass fishing.”

“How could I have been so out of touch?” McNutt wondered, and concluded, “I was existing in a science bubble. I lived and worked and socialized with people who thought just like me. I was a victim of group think.”

It was a hard-learned lesson that she would use throughout her career. Some years later, as director of the U.S. Geological Survey, McNutt was sent to oversee a team of federal USGS scientists working alongside Department of Energy scientists and oil industry engineers to stop the ongoing crude oil spill from the catastrophic BP Deepwater Horizon oil rig explosion. She spoke of the challenge of bringing these diverse, independent groups together as a single team that could overcome their own “group think” and “solve a problem that had never before been confronted: controlling a raging gusher a mile deep in the Gulf of Mexico.” Under her leadership, the team remained focused on the shared goal despite their differences, she said, and quickly “developed never-before-used technologies to estimate the flow rate, contain the gusher, and seal the well. They got the job done.”

McNutt told the WPI graduates that, in her experience, people who will achieve the greatest successes are those who are able to “listen to the variety of viewpoints, learn from them, and build shared purpose.

“In a fractured world,” she concluded, “I’m counting on your teamwork to carry us through.”

In her remarks, President Leshin briefly noted the accomplishments of McNutt and Yee, who each found ways to break barriers and open doors for themselves and others. She predicted the Class of 2018 will do so, as well, “whether advancing new knowledge, or expanding your ideas of what is possible in your own life. In fact, many of you have already done so while you were here at WPI.”

To illustrate, Leshin told the stories of three of today’s graduates. Tyler Reese, who received the university’s first PhD in discrete mathematics, had to “break through a barrier that resided in his own mind,” Leshin said. He needed to cross over from thinking like an undergraduate to thinking like a graduate student. “Tyler said, ‘As graduate students, our role in the chain-of-knowledge is transformed. Our job is no longer merely to find the answers, but now we must ask the questions.’”

President Leshin also spoke about Lindsay Lozeau, who received a PhD in chemical engineering. Lozeau’s work on alternatives to antibiotics (an interest sparked by the death of a family member who died from a chronic wound infection) comes “at a time when some bacteria are becoming more and more resistant to antibiotics. This work has tremendous potential to make hospitals safer and patients healthier.”

“And finally, I want to give a shout out to our students who completed most or all of their studies online,” Leshin said, recognizing the growing population of students who study remotely through WPI’s online graduate programs. “Perhaps none more remote than Danielle Shephard, who traveled here from her home in Alaska to walk with her peers and receive her masters in power systems engineering.”

And as she does each year, Leshin told the graduates, “With your talent and your WPI education, we know that you will do well in your career, and do well for your families. My charge to you, Graduate Class of 2018, is that you also be sure to do good. For your community, for your nation, for the planet, and for all those who will follow in your footsteps.”

Zhang, who received a PhD in electrical and computer engineering, likened his journey at WPI to running a marathon. “It is a journey of perseverance,” he said, telling his fellow graduates, “we persevered by writing one more sentence for our paper before eating lunch; conducting one extra [lab] simulation before calling it a day; staying in the lab during Thanksgiving and Christmas…waking up at 4 a.m. before the moonset” to complete the work. Zhang, who came to WPI from China in 2011, spoke of the journey of both professional and personal discovery, and of finding the “true beauty of our fields” while overcoming challenges, fear, and doubt.

“I hope we all remember that the most beautiful part of this WPI marathon course is not crossing the finish line,” he concluded, “but is in relishing each step of this journey itself.”

After being presented an honorary doctor of engineering degree, Yee told the audience that he initially wondered why WPI bestowed such an honor upon him, noting that he felt prior honorees were “more accomplished” or had done more for the university. He concluded, however, that it was his persistence in following through on his passion for the last 40 years that garnered the honor. In fact, throughout his career, Yee has been a steady presence in WPI’s work in Hong Kong and China and has sponsored numerous projects at the Beijing Project Center. Now an emeritus member of the WPI Board of Trustees, he served on the board from 2000 to 2013 and on the President’s International Advisory Board from 1998 to 2006.

Yee, whose family immigrated to the United States from China, enrolled in 1970 and was among the first students to study under the WPI Plan, the university’s revolutionary new approach to education centered on a project-based curriculum. The Plan fit perfectly with Yee’s eagerness to roll up his sleeves and get to work. He graduated with a degree in mechanical engineering.

“Persistence for me involves an unwillingness to be complacent, and an appetite for new challenges,” Yee said. “My first job out of WPI was comfortable and full of expectation and promise, but I wanted more challenge, so I went to get my MBA. My first job out of business school was comfortable and promising, but I wanted more challenge, and I started my own company and grew it steadily.”

Yee founded Pacific Can Company in 1991. Now a leading aluminum can manufacturer in China, the firm has received numerous industry and economic development awards.

“To operate a business in any developing country, especially in China, is a multifaceted challenge,” he said. “Persistence is easy when it is paired with passion in trying to do the best and be successful. That passion was founded on the underlying belief that I could succeed and make a difference. It has taken me nearly a lifetime to distill this awareness. And perhaps you may find these concept—persistence and passion—helpful in your life, too.”

Since 2016, WPI has held two distinct exercises in the spring to celebrate the accomplishments of its undergraduate and graduate students, owing in part to the growth of its programs, particularly its graduate programs. This year WPI awarded a total of 764 master’s degrees and 65 PhDs, including its first PhD from the Foisie Business School. More than 980 students will receive bachelor’s degrees when the undergraduate commencement exercises are held on Saturday, May 12, at 10 a.m. The keynote will be delivered by Margot Lee Shetterly, author of the bestselling book Hidden Figures. Shetterly and Philip Ryan ‘65, former chairman of the Board of Trustees who served as interim president of WPI in 2013-14, will receive honorary degrees.

WPI will also host the ROTC Joint Commissioning Ceremony Friday, May 11, at noon, with speaker Robert Catalanotti, senior advisor to the Assistant Secretary of Defense for International Security Affairs and recently retired Major General. Twenty-five cadets will be commissioned.