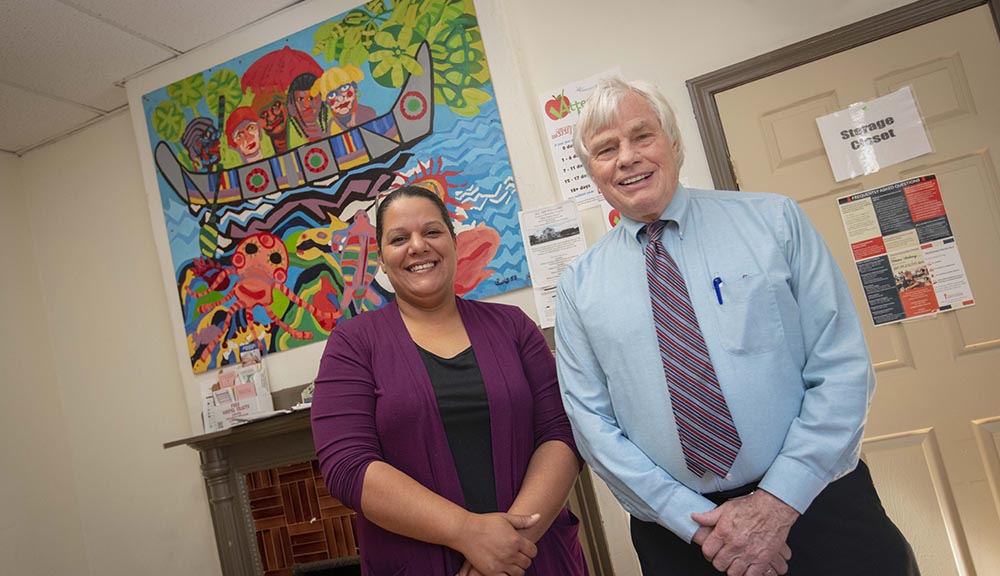 From holiday food drives to mentoring programs to student projects––including a recent Interactive Quality Project (IQP) aimed at making the facility more energy efficient––WPI has had a long-standing relationship with Friendly House, a multi-service center that works with families in inner-city Worcester.

A connection that began decades ago with the nonprofit’s founders––the Morgan family, whose long and deep connection to WPI began with the building of Washburn Shops and who remain among the university’s most generous benefactors––has grown under the longtime leadership of executive director Gordon Hargrove, who recalls walking the campus as a child. Now he’ll walk across the stage at the university’s undergraduate commencement ceremony on May 11, where he’ll receive an honorary doctor of humane letters degree.

“I was extremely surprised and then honored to think that was something WPI wanted to do,” he says. “It is one of most highly regarded institutions around the country and around the world. I’ve been involved with WPI from the very early days [of the relationship with Friendly House] and it is the culmination of years of working with WPI, students and instructors that somewhat completes the circle.”

Hargrove started working as a group leader at Friendly House in 1957, but was introduced to the WPI community as a child by his uncle, an instructor in the chemistry department. “As a youngster, I would go over to WPI out of curiosity,” he says. “But my first main contact was in the early 70s.” 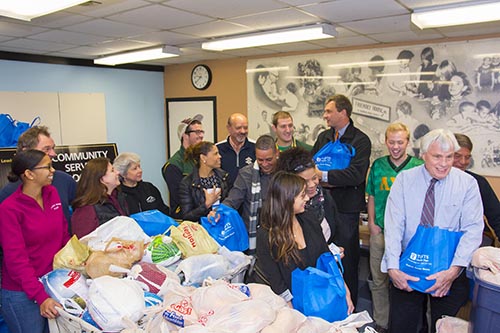 It was then he received a call from the WPI chapter of Lambda Chi Alpha (his fraternity during his college days) about collaborating on a program to donate food to those in need during the Thanksgiving holiday. In the decades since, this holiday food program has collected and distributed more than 10,000 bags of food and, in collaboration with other groups and organizations, has collected millions of pounds of food over the years.

“We are the largest holiday food distribution agency in the city,” says Hargrove, who will continue his relationship with Lambda Chi Alpha after he retires, serving as a chapter advisor. “For the holidays, we reach nearly 2,000 families––that’s 5 to 6 percent of the city of Worcester. It is one of our most important programs.”

About 40 years ago, a group of WPI students contacted Hargrove about designing the front yard and playground area of Friendly House for their IQP.

“[These students] worked hard on it and it turned into a great help to Friendly House,” he says. “The front yard had drop-offs and holes and they redesigned it and came up with infrastructure for the playground. At the time, it would have cost us more than $20,000 for the work. We used block grant money to complete it.”

Since then, there have been other student projects:

Hargrove says Friendly House plans to unveil the plans for the new building and expansion projects at its 100th anniversary celebration next year.

Teamwork at its Best

“This was an ideal project for WPI students,” says Roberts. “IQPs are intended to be projects at the intersection of society and technology and this project fit perfectly into that framework.  The students were able to learn about how Friendly House works, the social aspects of the home environment, and they addressed an issue that can easily be taken for granted coming from climate-controlled homes.”

Following a few months of project planning, preparation, and initial interviews, the group compiled several different options for improvements at the shelter based on varying costs, comfortability and efficiency, according to IQP team member Zach Uglevich ’20.

“In addition, our report supplies the state of the current condition of the house, a step-by-step plan for how we think Friendly House should implement the improvements, funding information, contractor contacts and quotes,” he says. “We wanted to make our recommendation process as easy and clear for Friendly House as possible. Our group greatly appreciates what Friendly House does to help the local community and we have enjoyed working with them.”

Roberts says the agency can use this information to raise funds for projects, and the students also researched grant opportunities that would support energy efficiency projects at housing agencies like Friendly House.

In addition, several IQP students, who are also members of WPI’s football team, facilitated a football program for children at the shelter outside of their project work.

Uglevich recruited football players and coaches for the Friendly House football program. “We played tag, football games, threw footballs and kicked field goals with the kids,” he says. “We also enjoyed some pizza afterwards with them. I think it was a great experience for the kids to meet some college athletes and get a taste of what college life is like. All of my IQP and football team members had fun playing, so it was a great experience for all.”

Along with food drives and student projects, there have been dozens of other collaborations between WPI and Friendly House during Hargrove’s tenure: