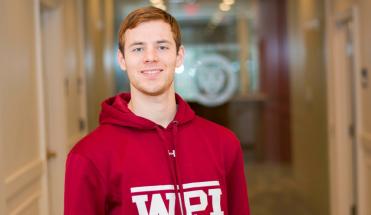 Brandon Clark ’18 was recently named a recipient of the Barry Goldwater Scholarship, becoming WPI’s 19th recipient of this prestigious award since 1994. The chemical engineering and electrical and computer engineering double major was also named an honorable mention last year.

“It’s very exciting to have some validation of the hard work,” says Clark, who also balances work with his fraternity, Tau Kappa Epsilon, and Engineers Without Borders. The two-fold application process involved an initial application to WPI for consideration, as one of only a few students who may apply for the national scholarship. Once that was approved, Clark needed to apply for the scholarship itself.

“It was a lot of work to do this scholarship,” says Clark, “and people ask why do this if I might not get it. But my thing is ‘Why not me?’ That’s what I have been trying to prove to myself.”

The prestigious scholarship was founded in 1986 in honor of former long-term U.S. Senator Barry Goldwater of Arizona. The scholarship, which offers up to $7,500 for current sophomores or juniors for the following academic year, is awarded to highly accomplished students who are planning research careers in the natural sciences, mathematics, or engineering fields. Students must be nominated for the award by their schools—they may not apply directly.

"Persistence and passion are what are required for successful research. Brandon has both in spades.” -Kristin Wobbe

According to Lucy Decher, executive administrator of the Barry Goldwater Scholarship Foundation, of the 1,286 nominees this year, 240 were chosen as scholars and 307 received honorable mentions. “Their stories are incredible,” says Decher, “and their passion at this tender age is breathtaking.”

Noting the compelling curiosity of the student winners, Decher says the scholarship expressly encourages the research-driven work being done by the students—“It’s the future we are supporting and encouraging.”

Clark says having the drive to succeed and find out new information is something within him. But he also knows that a scholarship won’t land in his lap just because of his excellent credentials. “The crux of it is being able to show you’re a good indicator of WPI’s pillars of theory and practice,” he says. “The real thing that shines through is convincing the reader you are interesting. It comes from doing things you are really passionate about.”

The Goldwater Scholarship is given to students who have a commitment to research and who are planning to have a research career. For Clark, a life without discovery and research is hard to imagine. “I’m interested in using my scientific ability to help the world in a concrete way,” he says.

As a WPI student, Clark sought out opportunities and experiences. Knowing he would benefit from personal and academic growth, he started early, betting his efforts would lead to payoffs like scholarships and opportunities later.

Kristin Wobbe, associate dean of undergraduate studies and associate professor of chemistry and biochemistry, notes Clark’s evident passion for research. “This passion led him to persist in asking faculty, as a first-year student, for research opportunities,” she says. “I’m sure he was ignored by some, turned down by others, but kept it up until he found a faculty member with space and time for him.” And, she says, he continued with research that isn’t always thrilling. “The same passion led to spending hours in the lab, and research is one of those areas that simply requires time. Much of the work is tedious, much repetitive; it’s easy to get frustrated and give up or just move on. Persistence and passion are what are required for successful research. Brandon has both in spades!”

Clark has already taken advantage of travel with beneficial components, including trips to Guatemala with Engineers Without Borders, and to Ghana over his sophomore year winter break to work on solar engineering. He conducted his IQP in Cape Town, South Africa, and spent last summer on a National Science Foundation opportunity at Columbia University. Connections made there led to recent conference presentations at Stanford and at the Material Research Society professional conference. All these experiences helped him narrow down his potential career focus, but also gave him excellent stories for the scholarship application.

“If I work hard enough to be a professor at one of the best colleges in the world, I would love that. And I would love to contribute to that environment. I would be humbled to be a part of that … of something bigger than yourself.” -Brandon Clark

On campus, Clark has spent more than two years working in Professor Amy Peterson’s lab and has co-authored a paper with her. Peterson, assistant professor of chemical engineering, has watched Clark’s skills develop over the two years he has volunteered in her lab and worked on projects, papers, and lab work related to polyelectrolytes and energy. “Brandon is incredibly hardworking, intelligent, passionate about research, and a natural leader—these qualities have made him a great member of my group,” she says.

In the future, Clark knows research will play a big part in his career, but he’s not quite sure what that will look like yet. He plans to weigh his interests in research and in industry and determine how to approach both.

“If I work hard enough to be a professor at one of the best colleges in the world, I would love that,” he says. “And I would love to contribute to that environment. I would be humbled to be a part of that … of something bigger than yourself.”

But travel, innovation, entrepreneurship, and industry also hold an allure. Mentioning LifeStraw, Clark says the idea of inventing a product that morphs into an organization that could help people is exciting.

Somehow combining the two would be his career sweet spot. “To do something unorthodox, you have to push the boundaries,” he says. “That’s the definition of research.”

This summer, Clark will be sponsored by an AMGEN scholarship for research work at MIT. And he will continue to apply for scholarships and opportunities as he finds them. He has no doubt that he will get only a portion of them, but so far that plan has taken him far. “You have to keep trying,” he says. “If there’s anything I stress, it is being proactive and going the extra mile to find things off the beaten path.”