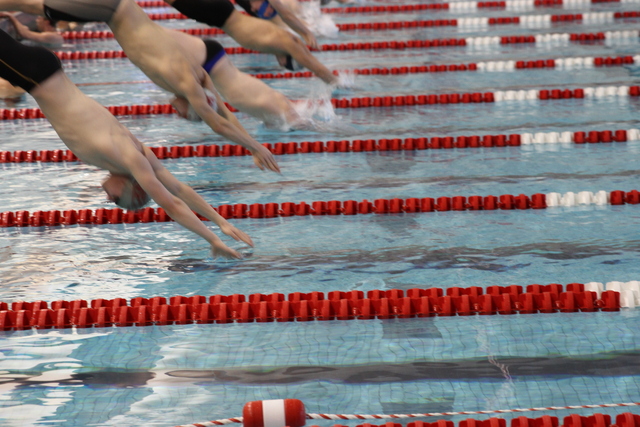 At this point in the season, winning isn’t the most important thing on the mind of Paul Bennett, head coach of the men’s and women’s swimming and diving teams. For now, Bennett is happy to see his athletes working hard and improving.

But that doesn’t mean the coach doesn’t savor a win, especially in the inaugural WPI Gompei Invitational on Dec. 7 and 8, when both the men and women took first place honors. The men set 11 school records, the women 8. And for the women, it was their first victory in an invitational.

“The athletes were really, really excited to win,” Bennett said in a recent poolside interview, especially the women. “They just really stepped up. They just dominated everything they possibly could.”

For her effort, Childers was chosen female student athlete of the week.

“She’s a great kid. She’s a hard-working kid,” says Bennett. “When she gets into a race, she really puts herself out there. You can see how hard she fights not to come in second.”

Childers has been swimming competitively since she was 6. She did well in swim lessons, her instructors recommended her for a swim team, and, as she puts it, “I just never left.”

“We’ve improved a lot as a team,” says Childers, who considers her teammates a second family. “We’ve definitely exceeded so many expectations.”

She’s looking forward to a training trip to Puerto Rico during the semester break.

WPI’s new pool, in the Sports and Recreation Center, played a major role in attracting Childers to the swim program. Bennett said that has been the case with many recruits, especially women.

While Bennett, who has coached at WPI for 10 years, said he’s always had success landing a couple of top recruits for the men’s team, the old pool in Alumni Gym gave women recruits pause.

The new facility, now in its second full season of use, provides more space for workouts and gives the coaches a better chance to teach and the athletes a better opportunity to prepare and improve.

“It’s just a better draw for us, all in all,” Bennett says.

The pool is fast, in part because of its depth, which reduces how much waves that bounce off the bottom slow swimmers, according to Bennett. And he mentioned the facility’s state-of-the-art starting blocks as another asset.

“WPI did an amazing job to put in some great tools to give our athletes the best advantage they could,” he says.

The pool also gave WPI the ability to host the Gompei Invitational, which featured nine other schools. Bennett was particularly pleased that the men and women won all their relays, events he calls the heart of the sport.

“To be able to walk away with that was really impressive for us, in my mind,” he says.

The invitational also helped prepare swimmers for the NEWMAC conference meet, which WPI will host over three and a half days in February. Bennett calls NEWMAC the second strongest conference in New England.