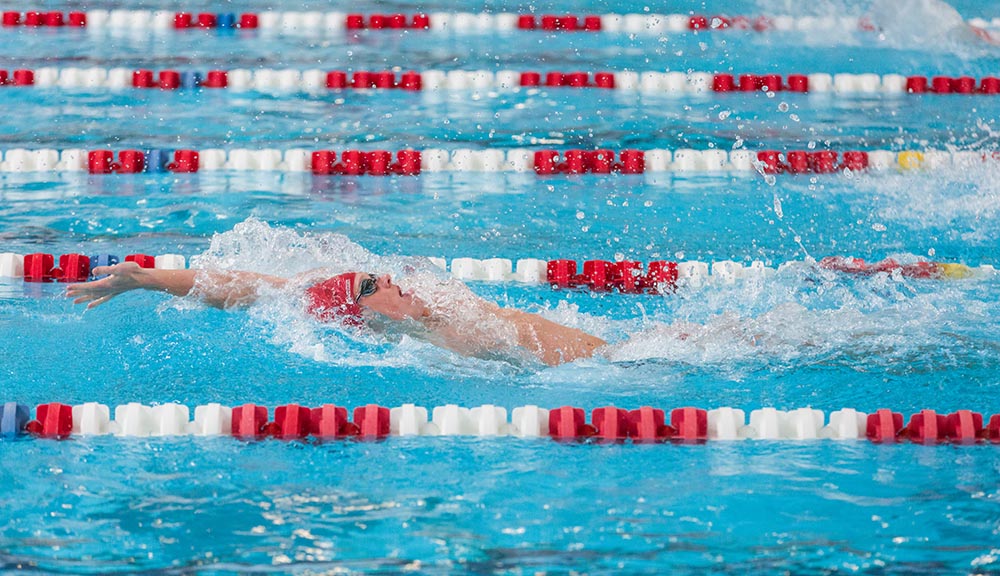 Jack Bauer '19 is one of several members of WPI's Swimming & Diving team continuing a family tradition.

Teammates can often feel like family, but for many members of WPI’s Men’s and Women's Swimming and Diving Team, that feeling is a little more literal.

Like his brother, Andrew Bauer ’17, before him, senior Jack Bauer is an All-American swimmer for WPI. Kelly Martin, also a senior, followed her sister, Emily Martin ’17, onto the women’s team.

Sophomore Erica Houghton's brothers, Matt Houghton ’17 and Nick Houghton ’15, attended WPI and swam for coach Paul Bennett before she came to the university and joined the WPI team.

This week, as the men’s and women’s teams host the New England Women’s and Men’s Athletic Conference (NEWMAC) championship at the Sports and Recreation Center, swimmers and their coaches talked about why so many family members have followed brothers and sisters to the university and its swimming and diving team.

“Honestly I don’t know if I can pinpoint one reason,” said Paul Bennett, now in his 15th year as head coach. “I would surmise that it’s the fact that WPI offers a remarkable education and the value of that education and the family environment of the team that help welcome siblings to the team.”

He added, “I generally just recruit good people who will fit our competitive needs and try to sell them on the value of the degree and the opportunities available here.”

A Connection to WPI

Bauer, who Bennett says has a shot at earning All-American accolades this year, agreed with his coach’s assessment.

“First and foremost, I knew I wanted to study engineering and saw WPI’s well-regarded, rigorous engineering programs as an excellent opportunity to do so. On top of that, seeing how well WPI’s project-based curriculum prepared students for the real-world was a huge factor,” he said.

“When I visited campus, there was a sense of community that I hadn’t seen elsewhere,” he added. “In talking with Paul and meeting the team, it felt like a supportive, fun environment that I wanted to be a part of and contribute to. And the prospect of being able to train in such a beautiful facility made the decision that much easier.”

Community was also the driving force for Martin. “I came to WPI because it was really the only college campus I felt like I could call home,” she said. “The sense of community and support was apparent upon my initial visit on campus and I knew I would be successful if I came to school here. “

For swimmer Houghton, her siblings’ experience almost had a different effect, and said that she actually didn’t put WPI on her list of possible schools initially because her brothers went there.

“Even after all the years of pushing WPI aside because my brothers came here, I finally realized it just was the best place for me,” she said. “When I visited I felt like I instantly connected with the people here and I knew that this could be a place where I could flourish.”

Finding Their Own Way

Bauer, Martin, and Houghton say their siblings were careful not to influence their decisions about where to go to school.

“Andrew wanted me to make the best decision for myself and therefore he took a step back while I was choosing where to spend the next four years,” Bauer recalled. “I visited him a couple of times while I was looking at schools and seeing him do well in the pool while genuinely enjoying himself spoke volumes about the decision he made to come to WPI.”

Martin said her sister was encouraging but also respectful that this was her decision to make. “She allowed me space during my [recruit] visit so that I could meet the other members of the team and not just be with her and her friends,” she said. “It allowed me to not feel like ‘Emily's little sister’ and allowed me to truly meet amazing teammates and friends.”

The Houghton brothers took a similar approach with Erica. “This was very helpful to me because I didn’t feel any pressure to make any certain decision,” she said. “I tried to make the decision based on only me before I thought about them. It also helped that both of them would have graduated by the time I would enter in as a first-year.”

Spencer Coffin ’13, now in his sixth season as an assistant coach, said the idea of giving possible recruits space to make up their own minds, whether they are relatives or not, is something the swimming program believes strongly in––and is how he approached the prospect of swimming for WPI with his brother, Rick Coffin ’17.

“I enjoyed my time as part of WPI swimming, and I am sure that Ricky could see that and wanted to be a part of that as well, even if we wouldn’t overlap swimming together at all,” he said.

Bennett said he thinks family connections are important but “not always to the extent of recruiting family members or siblings. If I have a swimmer who has a great experience, gets better, and shares that experience with their family, and that family shares that with other swimming families, it expands our ability to reach new areas and new recruits in general.”

A History of Success

Of course, Bennett’s success as a coach also is a draw.

He has been NEWMAC Coach of the Year three times on the men’s side and twice on the women’s. This year, the men’s team went 14-2 to end the dual meet portion of the 2018-19 campaign with the most single season wins in the program’s 92-year history—and the sixth consecutive year for double-digit wins. The women’s team, which went 11-7, set the program record for single-season dual meet victories. And along the way, Bennett surpassed 200 men's and women's dual meet victories.

His student-athletes have also made it to the national meet each year for the past five years, and diver Veronica Nikolai ’16 as well as the Bauer brothers have won All-America honors.

What are his proudest accomplishments?

“I think if you had asked me five years ago, it would have been the number of wins or the conference or nationals placings. Maybe even the All-Americas,” he said. “But I really do value my athletes––watching them struggle, succeed, and develop and then move on to become a vital part of their community, and then to get to see them come back and talk about their experiences … that is my favorite element.”