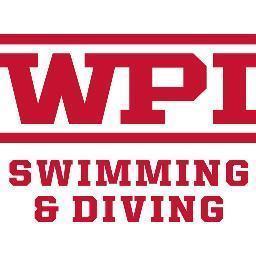 The handmade signs are going up around the Sports & Recreation Center pool, wishing the local swimmers and divers well.

“Adam Trumbley Is the Man”

Thursday through Sunday, WPI will host the New England Men’s and Women’s Athletic Conference Swimming and Diving Championships, a first for the university and probably a first for the city, according to head coach Paul Bennett.

“It’s amazing to be able to showcase this beautiful facility, and we’re really excited about bringing all the conference teams into the pool,” says Bennett, who was perched on poolside staging Wednesday, working out final details for the meet – and nursing a foot injury suffered when he slipped on ice.

Besides showing off the pool, Bennett says hosting the championships should give his swimmers a home advantage. They know the turf, so to speak. 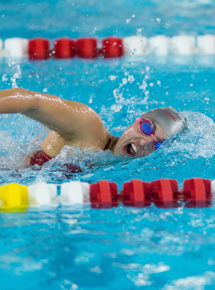 Swimmers and divers on both the men’s and women’s teams have shown toughness, leadership, and respect for each another this season, according to Bennett. The men’s record is 7-2; the women’s 7-3.

“Their tenacity in the pool and their devotion to one another is just amazing,” he says. “I have been continually impressed with them. … I knew that the team would be much improved, but I didn’t realize that they would bring such a hard-workingattitude into the pool. … It’s been almost an across-the-board thing.”

“You don’t expect a group, especially one that’s so freshman and sophomore laden, to come in and be so determined and so forceful in where they want to go, what they want to achieve, and how hard they want to work for that,” Bennett says.

Events get under way Thursday, with men’s 3-meter diving at 5 pm and 800-meter freestyle relays for men and women scheduled to start at 6:30.

In December, Bennett said his focus was for his swimmers and divers to improve. Going into the NEWMAC Championships, he wants the teams to move up at least one place over last year and for individuals to achieve their best. For the teams, that would mean the men take third place and the women finish seventh.

But every team in the conference has the same goals, Bennett points out, so competition will be tough.

“If everyone on my team swims really well and we finish in the same spot, I have nothing to be unhappy about,” he says.

Also coming up are the NCAA Regional diving competition Feb. 28 and March 1 at Rensselaer and the NCAA Championships March 19–22 in Indianapolis.

Last year, diver Veronica Nikolaki went to the NCAA championships, and Bennett hopes she is able to return this year – accompanied by a few teammates. (She has already locked up a spot in the regional competition, which is for divers only.)

That will be no small task for the swimmers. To automatically qualify, their times in the conference championship would have to be within 3 percent of NCAA records. Otherwise, the national championship takes the best times until all spots in the meet are filled.