One moment you’re swatting flies, the next you’re spinning records – and at any other time you could be flying a plane, making a sock puppet sing, or simply washing a window. 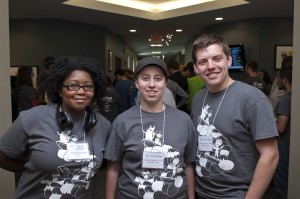 Successfully achieve these various tasks, and you win virtual capsule toys (like the sort that come tumbling out of coin-op machines).

Such is the simple but addictive premise of Many Mini Things, a motion-controlled game created by students from WPI and other local colleges as part of the annual MassDiGI Summer Innovation Program.

The prestigious program, which challenges its student participants to create a fully functional game in 11 weeks, was held at Becker College from May 20 to Aug. 7, culminating with an open house at the school’s Weller Academic Center.

Twenty-two students from 11 schools – including Roughan, Owen West ’15, and Sienna McDowell ’17 – were chosen from a pool of 150 applicants. As they broke into groups and worked on creating four games, they were housed at Becker and given a stipend for their work.

“It was our literal job for 11 weeks straight,” said Roughan, a double major in game design and professional writing. Unlike during the school year, “we had no other distractions.”

Several game ideas were brainstormed during orientation, she explained, then four were ultimately chosen and participants were split into groups based on their strengths. Drafting, designing, building, and numerous rounds of testing followed.

I can pretty easily build upon the skills I learned this summer.
Owen West

McDowell, a Philadelphia native, worked on the latter, which challenges players to match up zombie limbs on a grid and inevitably create a new body out of them.

As she noted, the program helped her get a grasp of her own potential. “I’ve learned that, even if you’re convinced you won’t be able to do something, just go at it,” says the interactive media and game development major. “If you try, you’ll get at least halfway there, which might just be enough.”

Meanwhile, Many Mini Things makes use of a Leap Motion controller, a relatively new technology that senses finger movements without the need for touch. Players grab, hit, and move objects on the screen by performing the motion in mid-air.

As Roughan explained, the development process could be tough at times, given the need to create digital objects that would prompt natural reactions (such as a fly that needs swatting). With a multi-player function, the game is “bright, colorful, and cartoony,” she said, and fits into the “party game” genre. 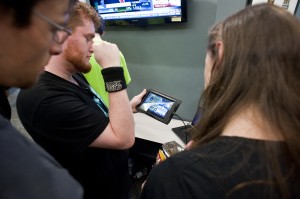 “It’s been a great experience,” said Roughan, who is from Wilton, Conn. “It’s not what I expected at all, which is a good thing.”

Most of all, it helped her gain an understanding of how to begin a career in the indie gaming field, her end goal.

West, a game design major and art minor who served as tech artist for Many Mini Things, says he would also ultimately like to end up in the indie market, although he notes that it’s difficult to break into, because you need to be self-managing, work quickly, and have a “really good idea.” Cultural phenomenona such as Candy Crush Saga and Flappy Bird are “1 in 100,000,” he says.

So, he notes, he’ll likely start by trying to get into a AAA studio (the top tier) as a QA game tester, a position he says should help him gain a wider understanding of the overall business and members of the company.

“It was eye-opening,” West, of Northampton, Mass., says of the Summer Innovation Program. “I can pretty easily build upon the skills I learned this summer.”