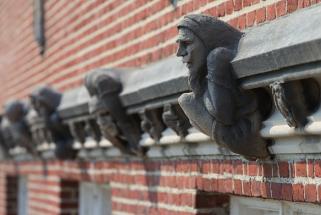 After standing for a century, lending both dignity and a quirky charm to the campus Quad, Alumni Gymnasium is being dismantled—its cornerstone, distinctive grotesques, and other unique features removed for historic preservation. 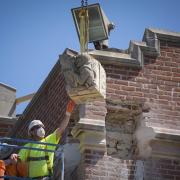 A worker guides a
grotesque being lowered
to the ground.

Alumni Gym was built with 34 pieces of distinctive art called grotesques, which were incorporated into the building's frieze. (They differ from gargoyles in that grotesques do not spout water.)  Grotesques are distorted caricatures that have been used as decorations on buildings in Europe since about 1500 A.D. They are often romantic figures used as empathetic characters in literature. The limestone grotesques adorning Alumni Gym were hand-carved to reflect activities on campus at the time, and thus they hold a special place in the university’s history.

According to university archivist Jessica Colati, the faces of the figures are not random renderings. Her research has shown that at least some may be modeled on specific university benefactors and faculty.  One figure, with a tennis racket, is believed to honor mathematics professor Levi Conant, who was interim president from 1911 to 1913 and oversaw fundraising for tennis courts on campus. As implied by its name, the building was originally funded by the WPI Alumni Association.

And Colati says that the grotesques were not designed only as tributes to athletic pursuits—though tennis and basketball were always intended as the primary activities in the gym, the building was also planned as a multi-use facility. For example, several figures represent the Glee Club, the WPI Journal, and the student newspaper Tech News. Several grotesques give a nod to sporting teams not officially sanctioned on campus at the time, such as bowling, fencing, and gymnastics. Another figure holding a rifle seems to reflect marksmanship activities. 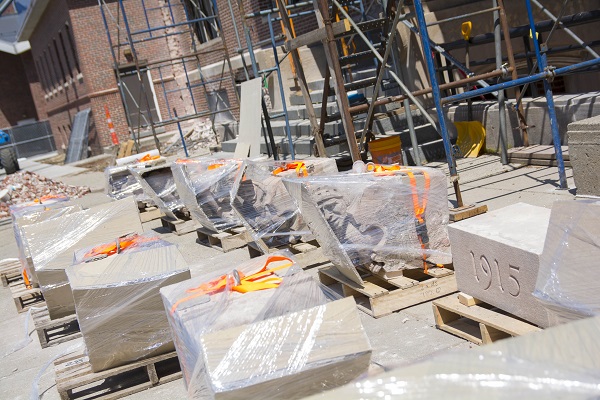 Over the course of two weeks in late June, the grotesques were carefully loosened from their perch by skilled masons using stone-cutting tools and then lowered by a crane that placed them on wooden pallets for temporary storage. The process went smoothly, thanks in large part to a test run conducted in January, in which the team of masons determined the best method for removing the grotesques without damaging them. The condition of the carved limestone pieces had been in question prior to the tests in January, when crews had a chance to inspect them up close. Fortunately, most of the grotesques were found to be in remarkably good condition for their age and long-term exposure to the elements, and their removal has gone more smoothly than officials had expected.

The figures will be cleaned, touched up, and reused in a few ways. A number of them will be used in a historic display outside the new building—on the new exterior wall for Harrington Auditorium. (Harrington is currently connected to Alumni Gym; a new wall will be built facing the Foisie Innovation Studio, adjacent to a plaza that will connect the Quad to the Campus Center area.) Several other pieces will be displayed near the athletic fields as a motivator to WPI’s student athletes.

The scroll over the door and the building cornerstone, which housed a time capsule, were also removed from the building earlier this summer. Photos of the capsule being placed into the wall were taken in 1915 by the Worcester Telegram, and Gordon Library's Archives and Special Collections includes at least a partial list of the capsule’s contents. Colati explains that the sealed copper box is presently being examined, and says that the contents will be revealed at a later date. “When we do open it, it will be really exciting to see if the items are intact, and to see if there is something else included.” she says. “This is the mystery!” It is expected that the items in the time capsule will be added to the university’s historic collections.

Meanwhile, demolition of Alumni Gym will continue through August. Jim Bedard, director of construction services at WPI, says that traffic and parking around the building will be interrupted at times, but no long-term disruption of campus activities is anticipated.

The Foisie Innovation Studio, to be constructed on the site, will house two floors of academic innovation/project work space and three floors of residential space. The 75,000-square-foot building, which will showcase and expand WPI’s distinctive academic programs, is scheduled for occupancy in 2018.

A formal groundbreaking celebration will be held Wednesday, August 31, at 2 p.m. on the Quad. All are welcome. Watch for more information in the coming weeks.