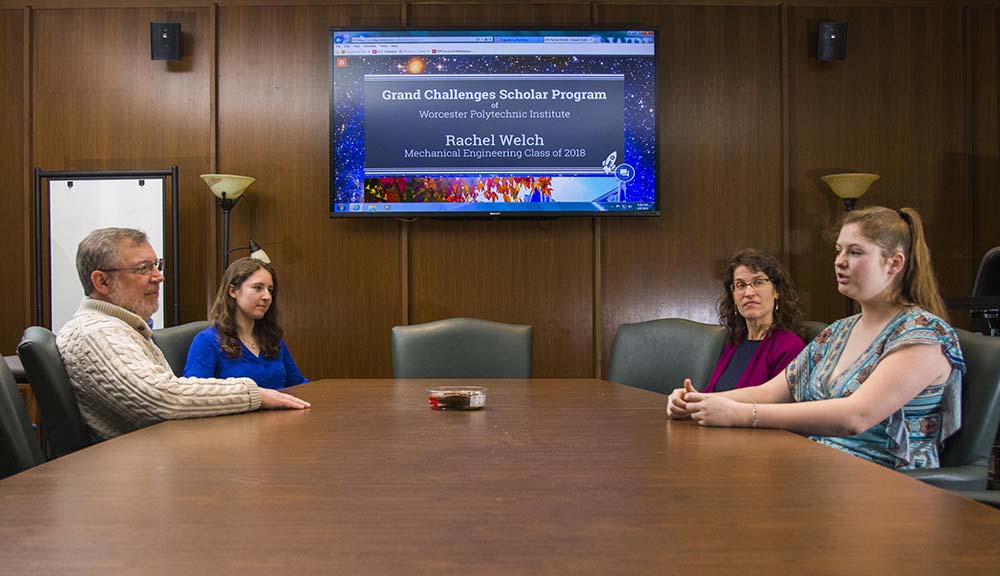 Editor’s Note: This story has been updated with a postscript at the end of the article. It was originally published on Jan. 8, 2020.

Sit down with associate professor of mechanical engineering Chrysanthe Demetry and chemical engineering professor of practice Stephen Kmiotek, and the first thing you’ll notice is the respect and admiration they have not only for each other but for the students they advise as co-directors of the Grand Challenges Scholars program.

“It takes a special kind of student to see the program’s value,” Demetry says, “and the students who do seem to get really passionate about it—and their work is amazing.”

WPI was first named a Grand Challenges Scholars school in the summer of 2017 and subsequently welcomed its first cohort of scholars in early 2018. The program builds upon the WPI Plan while giving students the chance to not only reflect on their project work and other academic achievements, but make connections between them and their own individual passions.

“It’s a way for them to stay connected to—and discover, in some cases—the meaning and purpose of their education,” Demetry says.

While the program is open to students from all majors, it isn’t a distribution requirement or something students get credit for. Nonetheless, Kmiotek has noticed an uptick in their involvement, saying he could easily see 100 students per year being involved in future years.

“Our cohorts are very, very loyal to it,” he says. “We didn’t want to make it overly burdensome, but they’ve uniformly asked, ‘Can we do more together?’ From a personal growth standpoint, it helps them integrate and make sense of all the other things they’re doing at WPI.”

The first cohort of students participated in the program on a more retrospective level; because they were seniors, most of their experience involved reflecting on what they had achieved during their time at WPI. Going forward, Kmiotek hopes to admit students as scholars before they participate in their IQP to give them the opportunity to more thoroughly shape their coursework and experiences through the influence of the program.

“We’re pushing for a far more integrative approach of mixing cocurriculars, coursework, project work, internships, and outside interests to make for a very rich experience,” he explains.

A core aspect of the program involves students creating an e-portfolio that allows them to collect their work and achievements for reflection both individually and as a group. Some particular examples that came to mind for the two directors were a student who changed the course of her future career by connecting her work with Engineers without Borders with her coursework as a computer science major, and a student who realized his decision to join a ballroom dancing team played a key role in his ability to take risks and be innovative in his engineering work.

“Who’d have thought,” Demetry says with a laugh, “he so elegantly made that connection between dance and engineering, and I’m not sure he would’ve made it without finding it in his portfolio. Many of them made connections and discovered things they cared about that they wouldn’t have realized otherwise. That was remarkable to me.”

Making Connections—With Experiences and Each Other

The benefits of becoming a Global Challenges Scholar are vast, from having the opportunity to reflect on learning experiences and connect—both their experiences and with each other. But past scholar Katherine Handy ’19 sums it up best: “Most important, it helped me realize there’s a lot more to engineering than science and numbers.”

Handy and fellow scholar Pedro De Vasconcellos Oporto ’20 recently had the opportunity to represent WPI at the Royal Academy of Engineering summit in London. In addition to participating in a variety of hack-a-thons and other activities meant to curate leadership and collaboration skills, the scholars got to work with engineers and other professionals from around the world, and see the impact they, their skills, and their passions can have on those around them.

“It was by far one of the most significant experiences in my undergraduate career,” Handy adds. “Through the workshops and collaborations with other undergraduate students, I realized the impact we can have on our world today—we don’t have to wait until we graduate to solve real-world problems.”

While a trip to the Royal Academy of Engineering is more the exception than the norm, the pride Demetry and Kmiotek have for all the scholars is still clear. That pride extends to future scholars, as well—and there’s a lot to be proud of.

“Their work has given me a window into just how personalized a WPI education is,” Demetry says, going on to explain that while many students have the same major, no two paths and goals—or students, for that matter—are close to the same. “I see our students making choices that make their education coherent, thematic, and connected, and when you put it all together and see their individual stories, it’s just remarkable.”

“For me, I see this group of students who are passionate about wanting to make a difference in the world, and using their skills to do that,” Kmiotek adds. “They’re doing the work, building the skills, and focusing their effort on solving the problems—and as a human, that gives me a lot of hope for the future. Because I think they’re going to succeed.”

Like the rest of WPI, the Grand Challenges Scholars program pivoted to a remote format during spring 2020 and plans remote meetings during the fall. “In part, this is to help with social distancing, but perhaps more importantly, we want the program to be readily accessible to students, including those students who can’t be on campus,” says Kmiotek. Look for the program to offer more activities, too. “Our GCSP cohort have been very clear that they want to do more activities and mini projects together to help them share and develop skills they can then use on their IQP, MQP, and career,” Kmiotek says.