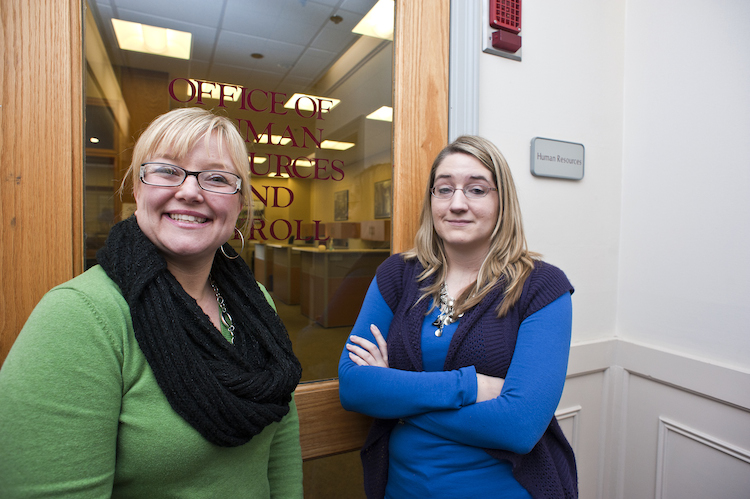 We’re all busy. Not everyone’s time fits into a neat, traditional workday schedule.

WPI’s Office of Human Resources & Payroll staffers found they weren’t seeing certain members of the campus community at their Boynton Hall offices very much —employees, teachers, or students whose schedules are jam-packed from 8 a.m. to 5 p.m. Some on campus were having a tough time getting payments processed, benefits questions handled, or payroll issues sorted out during these HR hours of operation.

The solution? A trial run of extended office hours on Wednesdays, to make the HR office more accessible for all students, faculty, and staff. Starting October 30, the office has open from 8 a.m. to 7 p.m. to better serve the campus.

The idea of staying open late one night a week is to service those who have other commitments during a normal workday. “That can include anyone in the WPI community,” says HR director Cynthia Pellegrino, “for a variety of reasons. Should there be an employee who works a different shift, a temporary employee, or a student who works or goes to class during our normal business hours — they can’t make it to our office without taking time away from their other responsibilities.”

The HR office understands that members of the community have many responsibilities. Its main purpose is to ensure that WPI is a positive workplace and that employees are engaged, informed, and included.

HR staffers juggle a broad range of functions. For instance, Web Time Entry (the online payroll system) is processed for payment by HR once approved by supervisors. Employee orientations are handled by the HR office, as well.

In its Training & Development capacity, the HR office heads up the WPI Leadership Development Institute, a seven-session management course, as well as separate professional development workshops on topics such as project management and presentations.

There is also a WPI HR Advisory Group on campus that meets regularly with HR officials. Its subcommittee, the Women’s Leadership Program, offers networking, mentors, and guest speakers with events throughout the year.

Due to its many areas of oversight, campus members flock to the HR office for forms, advice, and information.

The idea of introducing extended hours has been on the minds of many in the HR office for a while now. It was brought up at a recent staff meeting, says Pellegrino, and was implemented after the decision was finalized, about two weeks later. “We support any plan that will reduce inconveniences for those on campus,” she says.

The move to extended hours won’t mean bringing in extra staffers, however. Szymczak said whichever staff member is staying two hours late on Wednesday will come in two hours later the next morning. She says the extended Wednesday hours will be offered for at least a few months before they re-evaluate the situation.

The Office of Human Resources & Payroll is located on the second floor of Boynton Hall.