A Sea of Support

When sophomore mechanical engineering major Jared Grier was ready to come back to campus after a fall that left him paralyzed, WPI had a network already in place to help. By the time he made his return (Aug. 19), he knew exactly what to expect in terms of accessibility, housing arrangements, and the overwhelming support of his school.

In May 2015, in his freshman year, Grier fell while climbing a tree at Institute Park, injuring his spinal cord. For the next year he navigated his way through multiple surgeries, physical therapy, and medical appointments.

But he was ready to come back to classes. As he is quadriplegic, he requires a motorized wheelchair.

“It was exciting to finally be able to say … that Jared would be returning for the school year,” says Aaron Pepin, a senior mechanical engineering major who got to know Grier in their fraternity, Lambda Chi Alpha.

“He started by asking us, ‘What can I do to help all of you be more comfortable with this?’" says Pepin, "and this amazing attitude and unbelievable resilience and drive to move forward has proven to be an inspiration to me.”

What helped make the transition easier for all involved, says Emily Perlow, assistant dean of students, was the WPI Care Team.

Established years ago, staff members from health services, academic advising, counseling, athletics, and other areas meet regularly to identify and assist students who may need help to succeed. It could be a student who is having roommate issues or financial problems, for example. 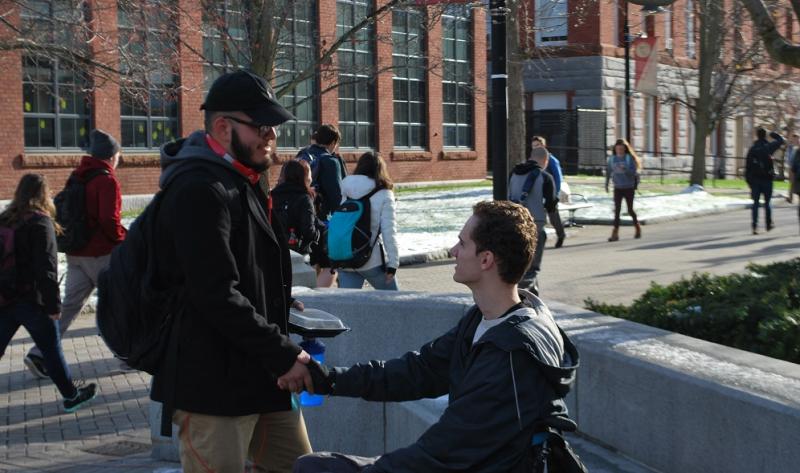 The Care Team is used to customizing solutions for students, says Perlow, and members are in communication with each other daily.

“Jared’s circumstances are unique," she says. "We had to figure out who are the players who need to be involved—like the Facilities Department—for door openers and our diligence about snow removal.”

Meetings with Grier and his parents were held with director of disabilities Laura Rosen, and others over the summer. The Grier family came to campus from their home in Granby, Conn., Perlow says.

The goal was to set up so Grier knew what to expect and would have the best chances of success while back at school, adjusting to a new life.

“We were able to show him his room [in Founders Hall] with an accessible bathroom, before he moved in. We talked about what he might need,” such as an air-conditioning unit modification, which was taken care of, says Perlow.

As for Grier, his patience is tested each day as he continues to adjust to his new normal. Waiting for elevators, for example, isn’t something he had to do before. Laundry can be time-consuming. He is learning to give himself more time to accomplish personal tasks and understand he can’t do things as quickly as he did before.

Pepin and other fraternity brothers —Andres Monterroso, Bly Rougier, Liam Fisher, and Tyler Greff—made a GoPro video for Grier while he was out of school. They borrowed a wheelchair from Health Services and showed a real depiction of how to navigate around campus, sending the video to Grier while he was in a rehabilitation facility in Atlanta.

"We were taking videos from the point of view of someone sitting in a wheelchair … to give him a better idea of what he would be coming back to,” says Pepin.

Grier is taking two classes now and is a PLA (peer learning assistant). This term he has a lab section for two hours twice a week, which he decided was a good way to ease back in to a full course load next term.

He has a standing frame that allows him to position himself upright, which helps the body in many ways, such as with digestion, he explains.

And he’s seen progress in his skills, he says. He’s regained control of his tricep muscles and has advanced in his overall strength, continuing to exercise in ways he learned in physical therapy.

“I’ve improved my transfers, so I can get in and out of locations like couches and move myself around,” Grier says. “That’s greatly improved.”

Between the students, staff, and faculty, Grier says his return experience has been “really good.”

“From Day One, they were here and ready to help,” he says of his school community. (In the first few days after the accident, President Leshin visited him at UMass Memorial Hospital.) “I never once thought I wouldn’t make it back.”