A purposeful free-form setting allows community to come together

In 2020, an extended period of social distancing from the COVID-19 pandemic thrust the WPI community into an unfamiliar scenario. Unable to meet face-to-face, virtual meetings became a norm. But that efficient and much-needed technology couldn’t replicate what so many started to really miss—spontaneously running into friends and colleagues on campus.

Now, a different technology and a specific intention is helping bring back some of those missed connections. The recent Open Space: How Will We Make C-Term Awesome? invited the kind of free-form brainstorming that might typically take place in what’s known as academic gray space—over lunch tables, in hallways after class, in line at Dunkin’, or during office hours.

In Open Space meetings, there’s no set agenda, no listed talking points, and participants contributing as they choose, coming and going as they wish, says facilitator Marc Trudeau ’81, who previously facilitated two online In This Together Open Space events in April 2020. This intentional, yet unplanned, structure creates a psychologically safe space to share ideas and gives each participant equal status. The next Open Space is on March 3 from 3 to 5 pm and is open to all community members.

Although Open Space has had an in-person approach for years, the pandemic has shifted its current use at WPI to an online format, says Trudeau. Reminiscent of indigenous gatherings in-circle and emerging from Harrison Owen’s explorations of the culture of organizations in transformation, Open Space is a purpose-driven meeting that begins with no agenda and has a looseness around start and end times. Those who come to an Open Space meeting are expected to bring their ideas, their passions, their willingness to listen and learn, and an unwavering respect for the people and the process. 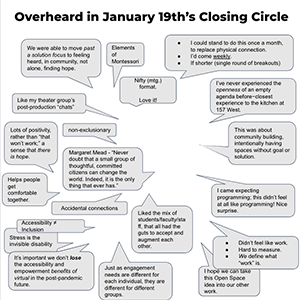 For a tech-driven university, such a marked change from a predetermined or pre-imagined schedule is sometimes a shock, says Trudeau, who worked with Art Heinricher, dean of Undergraduate Studies; Katie Elmes, director of Expanded Learning Opportunities in Undergraduate Studies; Curtis Abel, executive director of Innovation and Entrepreneurship, ad interim; and student organizers Ryan Candy ’21 and Rosana Pochat ’21 for this event. “Open Space represents a bit of a counter-culture approach,” Trudeau says, but it frees the group for co-creation. “Higher ed is facing a pivot and is in a bit of a time of crisis. But this is also a time of great opportunity.”

“I hadn’t heard the term academic gray space,” says Candy, “but it makes sense. When you’re out of the classroom, that’s what the college experience is about.” And as Elmes says, the idea of gray space isn’t new at all, but, in this process, the intentionality of making it an explicit part of our academic conversations and community is new. “It’s not just students sharing their thoughts,” she says. “It’s not about faculty or staff giving the solution. It’s about showing up, listening to each other, and co-creating. That’s the piece that’s newer for us as a community.”

Even if the format is unfamiliar, Elmes says it fits WPI. “At the root of who we are, we are a project-based and problem-solving community,” she says. “Making academic gray space explicitly part of our interactions helps us to see how we can consciously use our roots to grow and support each other. Open Space is the perfect place to intentionally practice academic gray space actions in a world where spontaneity is harder to find. All our voices really matter and have a place in these dialog.”

People crave informal interaction right now, says Elmes, but unplanned meetings are especially difficult to imitate. Most virtual meetings aren’t spontaneous and can’t quite replicate that in-person energy. That doesn’t mean something else can’t happen in a virtual space, says Abel, but there has to be some thought to make it successful. “I’m always late for meetings when we are on campus because I stop and chat,” he says. “This is another part of Open Space. We’re trying to recreate that experience online in a technical way.”

Check out the proceedings from the January 19 and January 26 events. Take a look at what’s coming up in the March 3 Open Space event.

“At first, I was a little nervous,” says Pochat, an electrical and computer engineering major. “I wanted this to be something good. And I was legit surprised. I interacted with people I had never interacted with before.”

As with the other organizers, Pochat wasn’t sure who, if anyone, would sign up for a four-hour meeting where the goal isn’t obvious. But the lack of immediate structure is beneficial. “Everyone in the session can do something,” they said. “Students have the power as much as anyone else there.” As participants mulled over the topic at hand—how to make C-Term the best ever—breakouts covered topics as diverse as “should faculty members require cameras to be on during class” to “addressing burnout” to “working harder at relaxing.”

Candy appreciated being on level footing with all participants. “The amazing thing about Open Space is that everyone is equal and listens to what everyone else has to say,” he says, noting that isolation was a big topic on both days. “We all have different experiences, but we have the same challenges. This is a grassroots conversation and as people bring in ideas, it compounds itself.”

Open Space allows ideas to bloom, but it also builds relationships—and, in essence, removes the silos that many campuses struggle with. “This inspires curiosity and that’s a skill so important from a number of perspectives,” says Abel. “A foundational skill like curiosity allows you to pivot.”

The organizers are eager to have others try Open Space—even if it seems unclear what will be accomplished. “People really cared,” says Pochat, and that feeling of community is essential right now. Candy agrees. “When Marc said it was going to run for four hours, I thought, ‘Oh no, four hours on Zoom? What did I sign up for?’” he says. “But then it went by in a blink. And it’s nice to have social interaction. Except for my roommates and in class, I don’t really talk to anyone else.”

When Trudeau talks to people post-event, he says some things become crystal clear. “The word surprise comes up a lot,” he says of the participants’ comments after attending. “It’s very hard to imagine Open Space. A good learning strategy is to assume it will be good and then try it.”