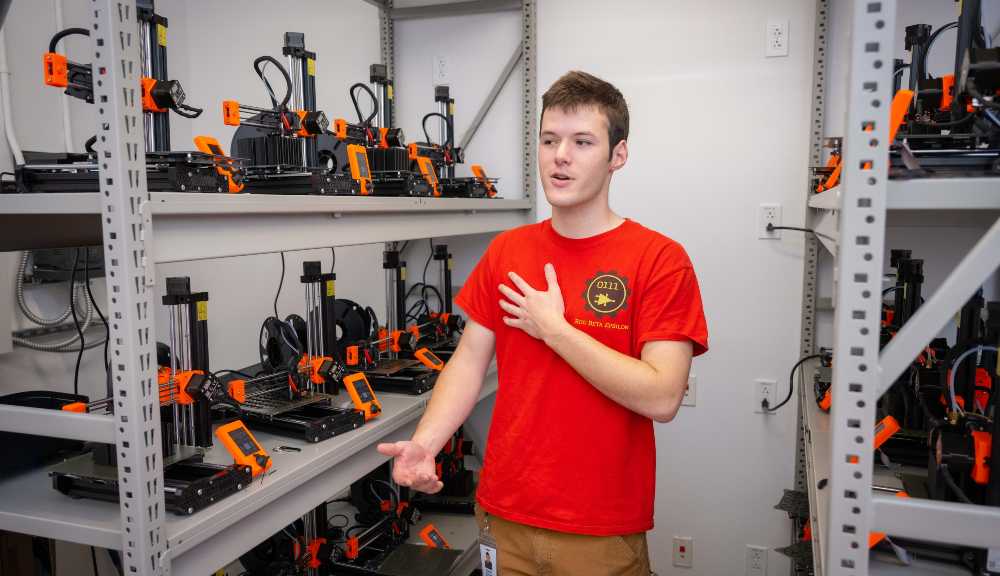 Pretty much since he stepped off the Commencement stage in May, Ezekiel “Zeke” Andreassen ’22 has been busy in a lab in WPI’s Unity Hall 3-D printing inspiration.

Andreassen has been deeply involved in the design and manufacture of the XRP (Experiential Robotic Platform) unveiled by WPI and DEKA Research & Development Corp. at the 2022 FIRST Global Challenge in Geneva, Oct. 13-16. The kits include everything needed to make a robot, Andreassen explains: the robot parts (3-D printed on campus), wire harness, battery compartment, wheels, and manipulator. 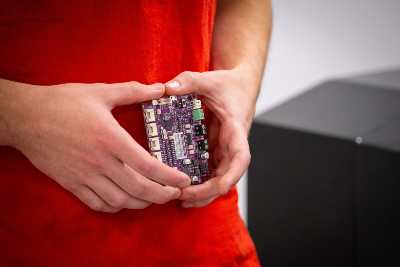 Each of the 185 competing FIRST Global teams will return to their 180 nations along with the challenge of using the XRP kit (or giving it) to help other students with fewer resources be able to engage in robotics. WPI will then provide virtual support for teachers and high school students in basic robotics education through online courses, and will guide them through the new system, which gives them the ability to scale up using the same hardware with free software updates. Andreassen credits WPI’s Manufacturing Engineering Department, the Rho Beta Epsilon robotics engineering honor society, and the prototyping lab with helping to make the kits a reality.

But the kits go beyond simply making and programming a robot.

“The first mission is to inspire,” Andreassen says, “with the teacher as the catalyst behind the inspiration.”

Andreassen was offered the opportunity to work on the XRP kits by Brad Miller, former director of the WPI Robotics Resource Center and senior fellow for the university’s new Global STEM Education Initiative. Describing what he’s learned from Miller, Andreassen notes that “kids learn when they see a robot move and it makes them hungry to learn more.” That’s the real idea behind the kits—to fuel that hunger not only for robotics, but for STEM in general, around the world.

“The hope is to make something that can hit all the educational objectives with the same robot,” says Andreassen, who is a consultant for DEKA on the WPI/DEKA collaboration. Students with little to no coding skills can control the robot with easy drag-and-drop coding, move on to FIRST coding, and to the WPI-developed curriculum. “We wanted to develop a platform where there’s almost no ceiling and plenty of rabbit holes kids can fall into that are almost infinitely deep.”

“The first mission is to inspire, with the teacher as the catalyst behind the inspiration.”

If anyone can create a journey through a robotics rabbit hole, it’s Andreassen, who came to WPI from Florida. He was drawn to “the unhindered access to make stuff” that WPI students enjoyed. He visited other universities where labs and maker spaces were only available to students during class and lab times, but that was never his experience at WPI.

“WPI can really enable you, and I’ve not been disappointed with how I’ve been enabled.”

From running the bouldering wall in Harrington Auditorium to participating on the Ribbot BattleBots team and competing on the popular TV show, to working as a robotics lab assistant, Andreassen says he’s been able to grow and also learn where he wants to direct his time now.

“I care deeply about robotics education,” he says. “One of the things I’m learning is I’m an engineer. I want an engineering project I can sink my teeth into.”

On BattleBots, he says, “the people who are successful aren’t the ones who hit the hardest, it’s the ones who keep coming back.” He’d like to continue that work with an engineering project focused on a robust tool that will be used every day and will continue to work. Right now, that tool is the XRP robot kit that will hopefully be used by—and inspire—hundreds of high school students in robotics and STEM around the world.

The Road to Geneva

WPI is in Geneva, Switzerland October 13-16, 2022 for the FIRST Global Challenge and XPrize ESG Leadership Summit. During the challenge, WPI will unveil the XRP described above to give students around the world hands-on access to robotics education and initiatives. Read about how and why in the stories below.