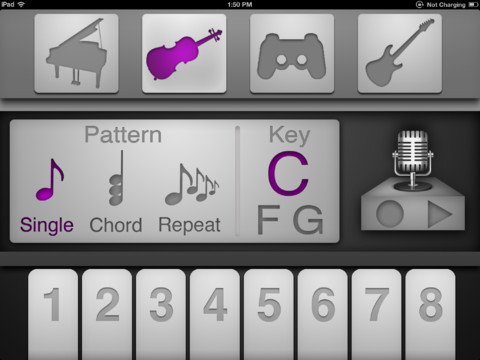 The integration of technology and music is making a surge at WPI, with the latest achievement coming from assistant professor in Humanities and Arts V.J. Manzo. Along with undergraduate collaborator Rayce Stipanovich, he recently presented his iPad application at the College Music Society National Conference at Boston University. The program is an open-source project that creates accessible musical instruments to help people play music, and is particularly beneficial to people with special needs.

Manzo defines himself as a musician, allowing programming to take the backseat. Before graduating with his PhD from Temple University in 2012, he taught music to students in grades K–12. It was at this time he discovered the diverse levels of musicianship his students possessed.

Adding to Manzo’s teaching dilemma were the limited abilities of his special needs students.

“Another difficulty I encountered was the mainstreaming of students with disabilities, mental or physical, in my classes,” he says. “So I began to look toward technology for assistance. It was during this time that I first thought of creating some adaptive instruments that would help bridge the gap among the musicality of my students.”

Manzo soon developed EAMIR, short for Electroacoustic Musically Interactive Room. He bought sensors, which he placed on the walls, doors, floors, and windows of his classroom, that gave him numbers he could map to music. The result was a program that allowed individuals to create a unique tonal musical expression without the limitations found in the performance of traditional acoustic instruments.

“Using these instruments was a great way to supplement teaching the musical objectives I was trying to convey to my students,” he says.

Through a generous grant from the Meyerson Foundation, an organization that works closely with autistic and disabled children, Manzo was able to develop the iPad application titled EAMIR Note with Stipanovich and fellow undergraduate Paulo Carvalho.

“The app was designed based on my original research into instrument accessibility and music cognition and education,” says Manzo.

EAMIR Note comes with a simple layout that allows the user to “play” instruments ranging from the piano to the harp, and even has the option of playing a video game controller, which provides robotically influenced sounds. By pressing the numbers 1 through 8 displayed on the screen, EAMIR Note will play notes from the scale, chords from the key, or chord patterns of the chosen instrument. There is also an audio recorder that picks up any vocal additions. The app is free and available for iOS, Mac, and PC desktops.

Manzo also developed a curriculum version of EAMIR Note with his friend and colleague Kim McCord, PhD, of Illinois State. The curriculum is free as well and has already been implemented into several schools. Manzo soon hopes to combine the app and curriculum in the form of various quantitative studies.

On Oct. 30, Manzo presented both the app and the curriculum at a conference in Boston — the premier conference in his discipline and one involves the Association for Technology in Music Instruction, a national organization.

“I am so thrilled with my students’ excellent work and excitement about the project,” says Manzo. “The presentation, the students, and WPI were all highly praised.”