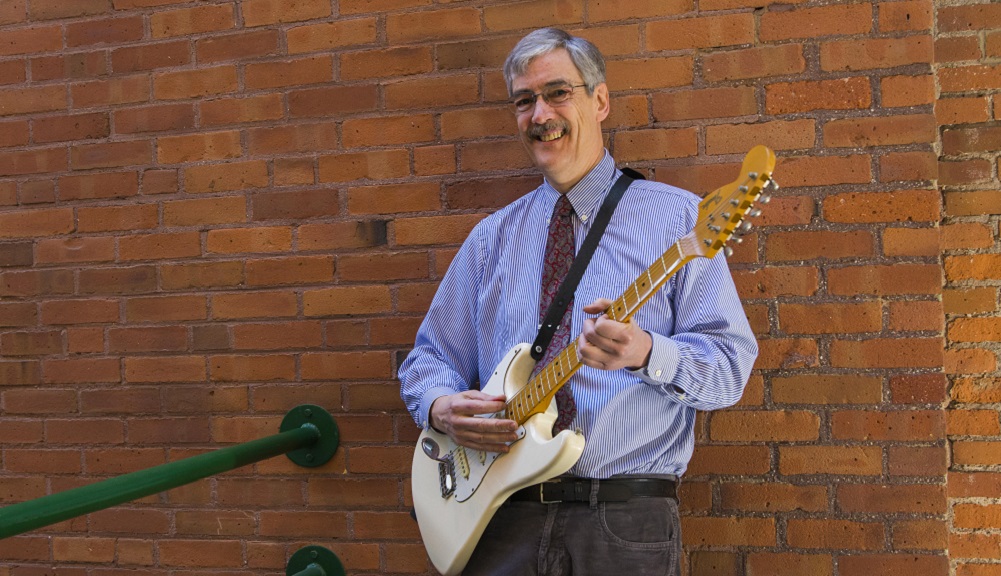 “Both Sides of the Sky” album to be released next week

In a way, he can’t, since Experience Hendrix keeps coming out with new Hendrix material, including the soon-to-be-released Both Sides of the Sky, an album containing previously unreleased songs recorded by the guitarist between 1968 and 1970. The album, slated to land in fans’ hands on March 9, was preceded by Valleys of Neptune (2010) and People, Hell and Angels (2013), both containing unreleased studio recordings.

The single “Somewhere” from that 2013 album, hit Billboard’s number one spot; Brattin, who is considered one of the world’s foremost academic authorities on Hendrix, finds that fact “powerful testimony that Hendrix’s magic is undiminished.”

Brattin’s expertise on Hendrix is internationally recognized.  Five years ago, he came into possession of a stereo soundboard of a Hendrix concert at London's Royal Albert Hall from Feb. 18, 1969. At the time, Brattin called the discovery “the most important Hendrix concert tape to surface in decades.” He was later featured in media outlets worldwide discussing the soundboard.

“New material keeps coming out,” says Brattin, who writes regularly for European journals UniVibes and Jimpress, publications dedicated to Hendrix. “There’s the new forthcoming album, but there is also new information, new books, new audience tapes, and new film that surfaces from time to time—in all of which I find a great source of pleasure.”

Brattin points out that most of the music on the album dates from 1969, a period of great experimentation by Hendrix. Only a single song is by Jimi's first band, The Jimi Hendrix Experience; there are several songs by the Band of Gypsys (Billy Cox on bass, Buddy Miles on drums). Two collaborations with Steve Stills are included, and other guests include Lonnie Youngblood (sax) and Johnny Winter (slide guitar).

“Jimi sings and plays guitar, of course, but he also contributes sitar, bass, and even vibraphone,” Brattin says. “Though many of the songs are unfinished, several songs are multi-tracked, and even highly polished. The album will please old fans, and attract some new ones as well.”

“Hendrix could do an extraordinarily wide range of things. One of the things he’s great at is the creation of beauty. Beauty in music is important, and it’s not always something people think of when they think of Hendrix.” -Joel Brattin

Brattin’s love for Hendrix’s music started at age 11. As the youngest of seven siblings, Brattin expanded his taste in music by listening to new albums with his older sisters. He recalls listening to Hendrix’s Are You Experienced?—his first exposure to Hendrix—with his sister Stella. “She liked it, and I shared her judgement,” he says.

He later graduated to listening to Hendrix with headphones, a technology that took off during the late 1960s. Headphones were revelatory for Hendrix’s studio music. Brattin says headphones revealed the beauty and complexity of Hendrix’s work with electric guitars, and showed off his originality in stereo mixing. “Hendrix wasn’t interested in recreating the sound of a live performance. Instead, he used the resources of the recording studio to create something entirely new.”

Brattin began building a Hendrix cassette collection during his undergraduate years at the University of Michigan, and took up serious study of Hendrix’s life and music in graduate school at Stanford. At the age of 26, Brattin published his first review of a Hendrix biography for a newsletter. Since then he has written, reviewed, and edited more than 300 Hendrix articles, books, reviews, and notes, including contributing to the 2009 WPI Connection article, “Hendrix and Woodstock: 10 Little Known Facts about the Performance That Defined the '60s,” which continues to attract readers. He has also created several feature-length Hendrix documentaries, and a handful of short films.

Brattin, professor of English Literature at WPI, credits now-retired professor JoAnn Manfra, who was the department head when he came to WPI in 1990, for encouraging him to highlight his scholarship on Hendrix. That encouragement, he says, reaffirmed that his research on Hendrix was “more than just a hobby,” and an important part of his work as a professor.

Recently, he says, an undergraduate student from the University of California, Davis, reached out to him for guidance on Hendrix sources for a paper he was writing on the rock star’s role in the American counter-culture in the 1960s. Brattin says he gladly helped the student, even though they didn’t know each other. “I asked how he'd heard of me,” Brattin recalls. “He said his instructor recommended me—he may have seen my published work.”

Brattin says his favorite Hendrix song is “Pali Gap,” released in 1971, less than a year after the artist’s death. It tops his list because the “stunning studio instrumental” gives listeners five minutes and one second of beautiful music.

“Hendrix could do an extraordinarily wide range of things,” Brattin says. “One of the things he’s great at is the creation of beauty. Beauty in music is important, and it’s not always something people think of when they think of Hendrix.”

Currently, Brattin enjoys editing Hendrix footage to create valuable material for listeners. The key to doing this successfully, he says, is to match the moving parts together correctly, maintaining synchronization with the soundtrack at all times. “Official releases are too apt to cut away from sync-sound footage of Hendrix’s guitar playing, padding the good footage with non-sync material,” he says.

No matter how listeners experience Hendrix’s music, Brattin says they are introduced to something “inexhaustibly rich.”

“It’s wonderful music,” he says. “You can listen to songs that came out 50 years ago, and you can’t wear them out. There’s always something new to hear.”