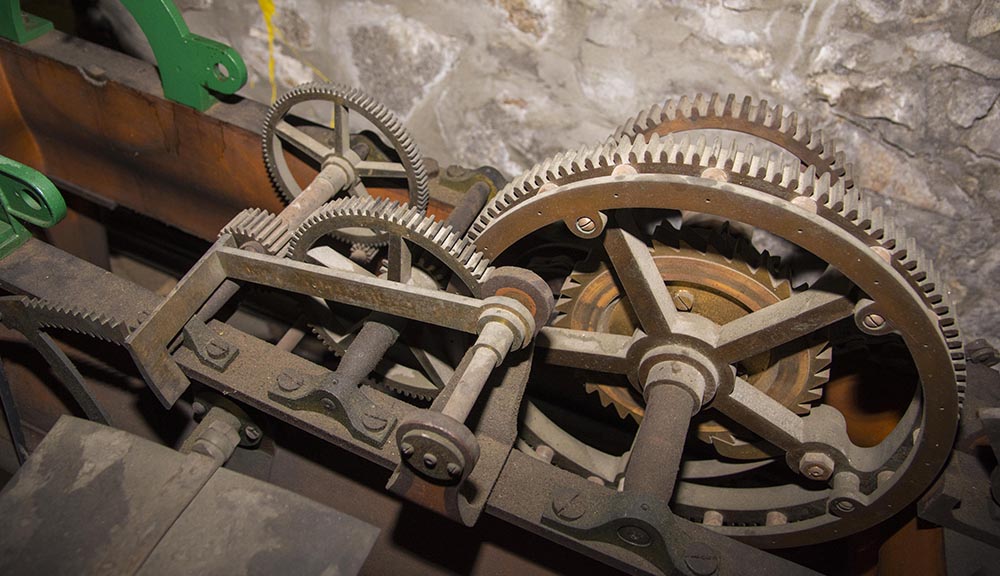 Turning the Hands of Time

The iconic Boynton clock tower has been a campus fixture since 1868, when the school was called the Worcester County Free Institute of Industrial Science and the clock’s mechanical gearing was manually wound. The clock was converted to electric power in 1950, and the motor made by E. Howard & Co. did its work silently and dependably until recently, when it was replaced by newer technology.

Roger Griffin, associate director of mechanical services, oversaw the work to replace the venerable Howard watch motor with a new one manufactured by Electric Time Co. in Waltham. The clock tower room, usually secured with a lock, still contains the wooden platform that holds the complex assembly of gears that originally turned the hands of the four clock faces.

The plaster and sheetrock walls are covered with nearly a century of graffiti, including a Nov. 22, 1963, entry noting President John F. Kennedy’s assassination.

In considering how to replace the failing motor, Griffin had asked associate director of buildings and events Terry Pellerin to see what other colleges do for clock repair and maintenance. Griffin looked into having a new one designed specifically for the Boynton clock. “They would have to engineer one,” Griffin said.

“Just the engineering would cost about $11,000. The company that made the original one is now out of business. It turned at two revolutions per minute. You would barely see it move,” he says of the old clock motor.

The new, more powerful motor can handle up to a 12-foot face, Griffin says. “Right now the clock faces are about eight feet. In the winter, there’s snow and ice, and that can build up on the hands and slow it down. This should run for a long time.”

Although the old electric motor ran fairly reliably, changing the time to correct for power outages or Daylight Saving Time was a complicated affair. A stoppage of the motor meant the array of gears and machinery that moves the hands would unwind a bit. So, because it would take about 17 minutes for the motor to get the hands moving again, workers would have to make note of the time, and set the hands 17 minutes ahead of the actual moment power was restored to the motor, Griffin says.

Once, some years ago, in an attempt to keep the machinery running smoothly, someone erroneously applied oil to the myriad gears in the clockwork, he says. The oil caused the gears to pick up dust, which clogged the gears and slowed the clock hands.

Former WPI carpenter Scott Horanzy took it on himself to climb up into the clock tower and painstakingly used pipe cleaners and brushes to remove the dust and oil from the gear teeth. (The oil can sits inside the tower to this day.)

Still, the electric motors required far less hands-on attention than in the years when the clock was powered by chain and counterweights weighing a combined 1,500 pounds, made by the C. and J. A. Colvin Foundry in Worcester.

“For nearly 100 years it had to be rewound every two weeks,” Griffin says. The chain and counterweights were attached to a gong that would sound hourly, located upstairs in the tower from the clock.

Worcester's City Hall has a similar clock that is still wound by hand, he says. “If we ever want to restore (WPI’s) to its original condition, Electric Clock has an inventory of counter weights,” Griffin explains.

The clock was purchased for $500 raised in 1868–69 by students and friends of the Institute. Two decades after its installation, a group of students entered Boynton Hall by breaking a first floor window, then sawed through the padlock on the tower door before climbing into the tower, reaching out through a small door in the clock face and ripping one of the wooden hands off the clock. This brazen act of vandalism on Nov. 4, 1893, was widely reported in local newspapers. 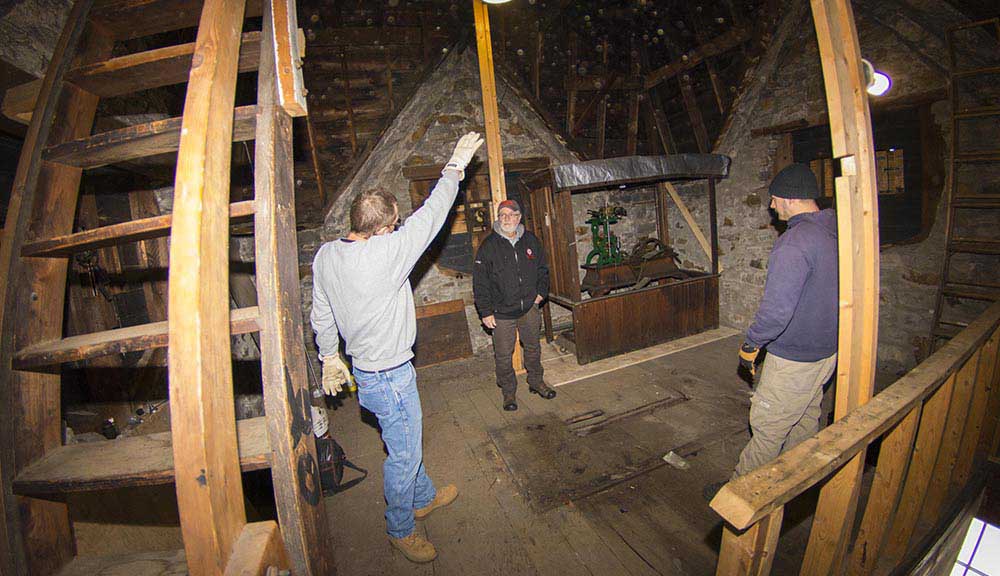 Eric Burden from Mungovan Trucking (left) in the clock tower with Roger Griffin (center) and another Mungovan employee. 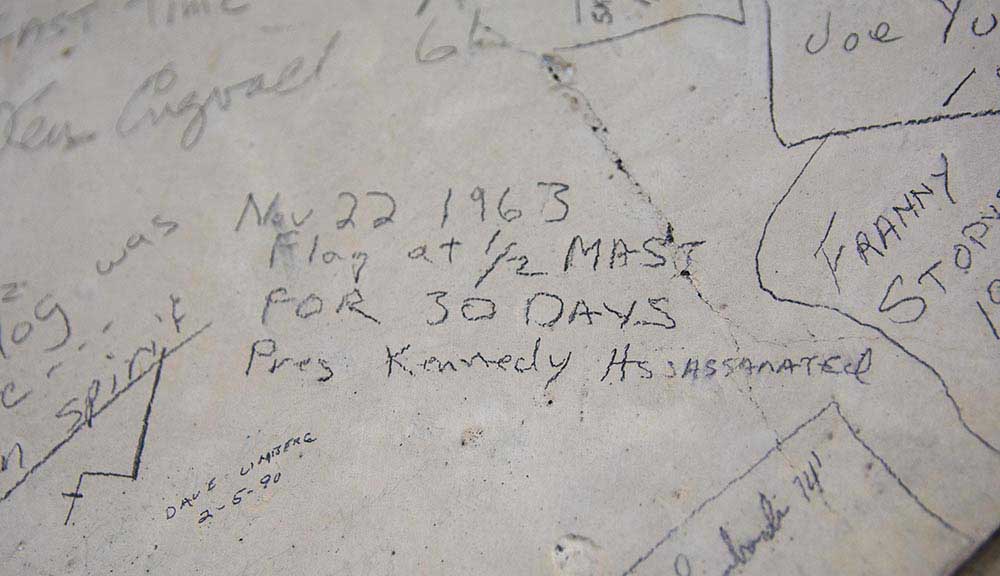 An example of graffiti left in the clock tower—this one documented the assassination of President John F. Kennedy. 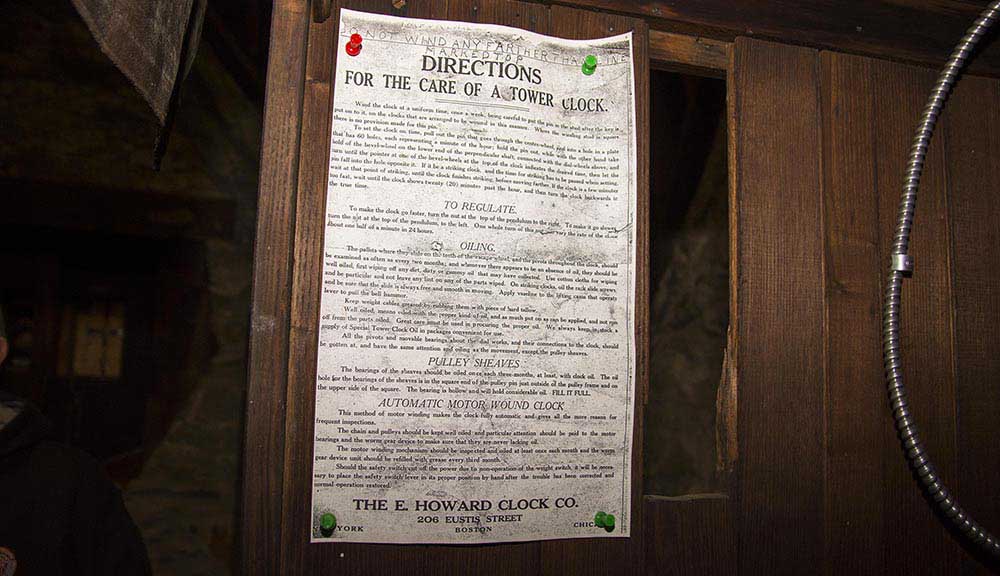 Directions for the care of a clock tower, courtesy of E. Howard Clock Co. 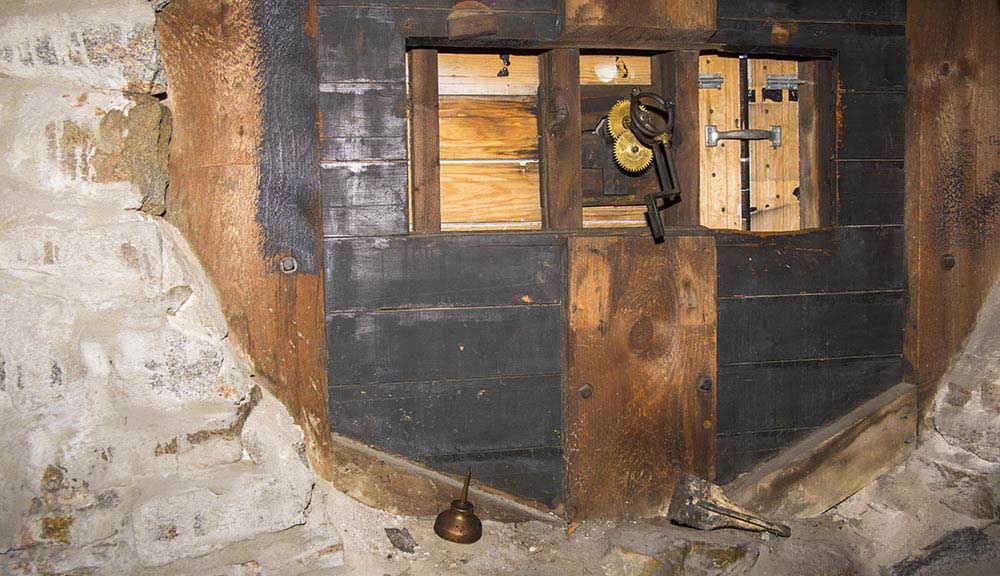 An interior shot of the clock tower. 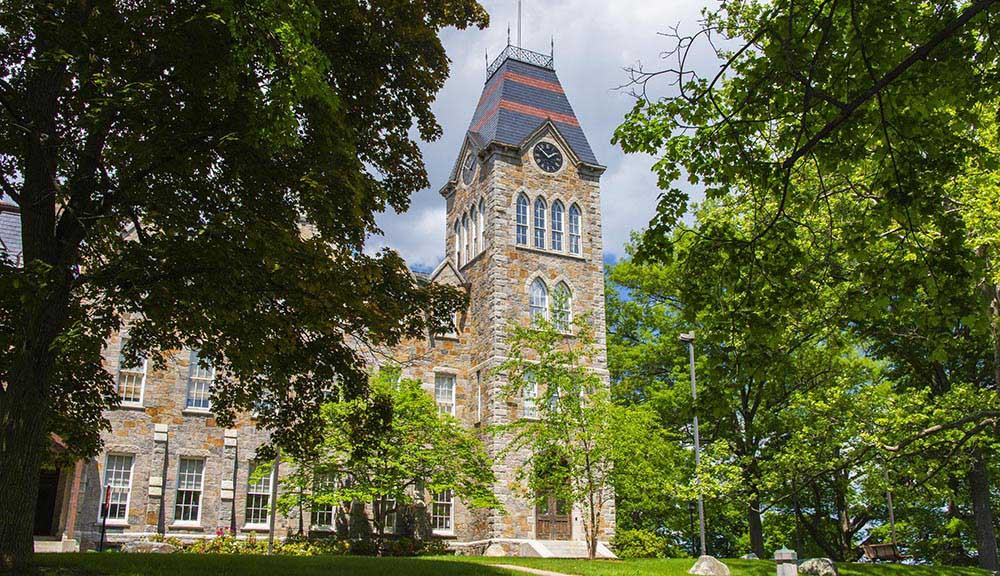