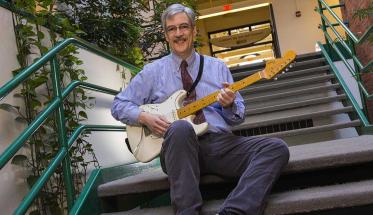 Hendrix and Woodstock: 10 Little-Known Facts about the Performance That Defined the '60s

On Aug. 18, 1969, legendary guitarist Jimi Hendrix stepped onto the stage at the Woodstock, N.Y., Music Festival and embarked upon an uninterrupted set lasting nearly two hours--one of the longest performances of his career. It concluded with a long medley that included the solo performance of the Star Spangled Banner that would become emblematic not only of Woodstock, but of the 1960s themselves.

When most people think of Hendrix and Woodstock, it is that performance of the national anthem that comes to mind. But to Joel Brattin, professor of literature at Worcester Polytechnic Institute (WPI), who has made an extensive study of the life and music of Hendrix, the Woodstock performance was a fascinating and telling moment in an all-too-brief career, one that was in a state of transition in the summer of '69. Brattin, who is also a noted authority on Victorian author Charles Dickens, says there are 10 elements of that performance that make it unique and historic:

Editor’s note: Later this summer the music world will mark 50 years since Jimi Hendrix and the Gypsy Suns and Rainbows took the stage in the early morning light of Aug. 18, 1969, to close out the Woodstock Music Festival. In light of this 50th anniversary, we are reposting this original story from July 22, 2009

Brattin has enjoyed Hendrix’s music since he was 11 years old, when he and his older sister listened to Are You Experienced?, his first exposure to the guitar great’s music. Since then, he’s written, reviewed, and edited more than 300 Hendrix articles, books, reviews, and notes. He’s also documented every foot of film available of Hendrix’s Woodstock performance and synced the footage that best showcases the guitarist’s legendary fretwork with the set’s complete soundboard.

Learn more about Brattin’s work on Hendrix below.

Brattin is also a renowned expert on Victorian author Charles Dickens. He teaches many classes on the literary legend, including one on the famous Christmas story, A Christmas Carol.