Key to the City 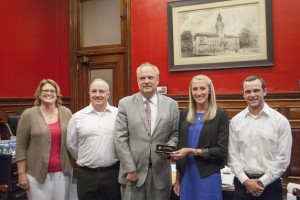 Liz Pellegrini ‘16 has a way of accelerating from the back of the pack to edge out the field in breathtaking style. And in true form, she capped her four years at WPI by earning All-America status with a come-from-behind second-place performance in the 400-meter hurdles in the 2016 NCAA Division III Outdoor Track & Field Championships.

Pellegrini, a biomedical engineering major and first WPI female runner to earn All-America honors, joined some elite company Tuesday evening when she was awarded the Key to the City by Worcester Mayor Joe Petty.

She was joined in the mayor’s office prior to the City Council meeting by her parents, Linda and Robert Pellegrini; coaches Brian Chabot and Miles Ketchum; Dana Harmon, director of physical education, recreation and athletics; and former teammate and coach Maya Rhinehart.

WPI's MS in Innovation with User Experience offers a program in creating, designing, evaluating, generating, and improving innovative products and services. Students use technology, business, and design to help organizations create value for consumers. This degree teaches students to navigate and build human technology design models while remaining mindful of business strategies to keep organizations competitive in the marketplace. You’ll develop the ability to design innovative experiences for the existing markets and also learn to design for emerging markets.

It was a particularly sweet moment for the Worcester native and Doherty High School graduate. She recalled that she was involved in several sports as a child, but became focused on track after an event in sixth grade.

“The first time I was interested in track was during my sixth grade mini-Olympics,” she said. “I was nominated from my school, West Tatnuck, to run in the 300, and I ended up winning. It was kind of like my final race at the Nationals—I was behind and in the last 200 meters, I just started passing everyone, and somehow I won. And ever since then, I’ve loved running and loved sprinting. 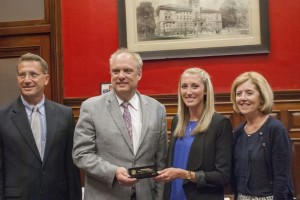 “I’ve been working toward the goal of All-America my entire time at WPI, since I found out that that was something a (Division 3) athlete could aspire to. This was the perfect way to end it. I feel very honored with the Key to the City. It seems like too much, it’s such an honor.”

Head coach Chabot called it a fantastic and unique honor, coming from the city of Worcester. “I’m not sure there’s an honor they could give her that’s higher than this,” he said. “And for myself, being a native of Worcester, it’s nice to see her receive something like that. Obviously, she accomplished some great things for WPI, but this is something a little extra special, being from Worcester and having accomplished all she’s accomplished.”

Harmon called Pellegrini a “great, great person” who exemplifies what she hopes to see in the university’s student athletes. “She’s amazing in the classroom. She’s an amazing person in the community, and of course, we’re thrilled for her success on the track,” Harmon said.

“And she worked her way towards it. It wasn’t like in her freshman year, or in all four years, she went to the Nationals. She really worked hard to achieve what she did this past year, and all of us could not be more happy for her, because we know the hard work and dedication it took to get here.” 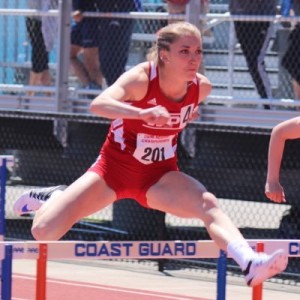 Ketchum, who coaches sprints and hurdles, said Pellegrini’s success means a lot to him because she was among the freshmen athletes he worked with in his first year at WPI. “I couldn’t be more proud as a coach for her four years at WPI. “She’s the first person I’ve seen go through the whole four years and graduate under me. So, it’s special for her to finish off her career as second in the country, and running a really great race is special,” he said. “Then, to be recognized by the city of Worcester is even better, because she’s a Worcester native and loves Worcester, and it’s nice to see her recognized for her athletic and academic accomplishments by her home town.”

The Key to the City is given to visiting dignitaries, heads of state, and local residents for significant achievements. Recent honorees include President Obama and New England Patriots owner Robert Kraft.

Rhinehart said that seeing Pellegrini’s success and recognition has been an awesome experience. “I remember when we were teammates for three years, and we had a lot of fun,” she said. “We went to the Nationals together twice and didn’t make All-America. It’s sort of great for me because I can live vicariously through her. As a coach, it’s been a great year for everyone, and for her. The team has been phenomenal, and we can just get better and better.

“The Key to the City is a really a cool honor that not everybody gets. Obama got one a couple of years ago, so it’s nice to be in that club.”

Academically, Pellegrini set a high bar, creating an app for the Milan Expo for her IQP, following it up with designing a training device for diagnosing canine abdominal palpitation at Cummings School of Veterinary Medicine at Tufts University for her MQP. She was a member of Alpha Xi Delta, Tau Beta Pi, and Habitat for Humanity.

Since graduating in May, she has been working at Philips Healthcare in Andover, and is considering postgraduate studies in the biomedical engineering field.