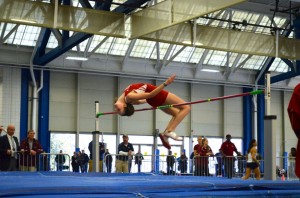 So often we are told that persistence pays off. For at least one WPI athlete, the adage is definitely true.

Laura Pumphrey, who earned All-America honors for her high jump achievements in the 2013 NCAA DivisionChampionships, confesses that when she started with the high jump back in high school, she was, in her opinion, “really bad.”

That was freshman year; when she tried it again sophomore year, the results were much better, and, as she puts it, she “grew from there.”

That growth reached new heights on March 9 when she became just the second WPI women’s track and field student-athlete to earn All-America status—and the first in 10 years. According to her coach, that’s just the beginning for the sophomore.

“Laura is only in the middle of her second year here. Having both the experience of an NCAA championship and the confidence gained from knowing she is now an All-American will be invaluable as she moves forward,” said WPI track and field head coach Brian Chabot, who added, “The best is yet to come.”

The same may be said for her academic and humanitarian pursuits. A biomedical engineering major, Pumphrey is hoping to work in a research capacity in academia or the medical or pharmaceutical industry. She already has a head start on making a difference in people’s lives; in January she worked with Engineers Without Borders at WPI in Guatemala to build rainwater catchment systems that collect rain water off roofs to provide the families with clean water year round.

“The trip was absolutely life changing,” Pumphrey recalled. “We spent most of our time with the community of Guatchu’uq. They are extremely welcoming people who were so thankful to us for everything we had done for them so far, and our plans for future rainwater catchment systems.”

Her involvement around the world will continue next year when she heads to Thailand to work on her IQP.

Despite the distinction of being named All-America, Pumphrey remains humble, especially when comparing herself to her track and field peers. “I don’t realize that I’m on the same level with all these girls who are so amazing at what they do,” she said.

Chabot, however, has no problem recognizing Pumphrey’s talent and ability. “Laura is a coach’s dream as a student-athlete. She excels in the classroom and in competition. It was clear that she worked hard throughout the summer to perform at a national level,” he said.

Likewise, Dana Harmon, WPI’s director of physical education, recreation, and athletics, expressed great pride in Pumphrey’s successes. “Her hard work and dedication paid off, and she is a powerful example that at WPI you can compete with and be recognized as one of the best in the nation in your sport.”